"Evolution, rather than revolution, is the way to go."

Change was always going to come at Leinster, reasons senior coach Stuart Lancaster, and the province is shooting headlong into it over the summer.

Having boasted, in seasons past, of winning titles with contributions of 50+ players, the IRFU are asking them to see if they can do it with smaller playing squads.

END_OF_DOCUMENT_TOKEN_TO_BE_REPLACED

Rory O'Loughlin and Jack Dunne are Exeter bound, Connacht are getting the quartet of Josh Murphy, Peter Dooley (both pictured below), Adam Byrne and David Hawkshaw. Added to that, Dan Leavy has been forced to retire and Devin Toner will retire at the end of the season.

The loss of so many experienced players is clearly Leinster's, but one side that will benefit most are the one they will face over two legs in the Last 16 of the Champions Cup - Connacht. 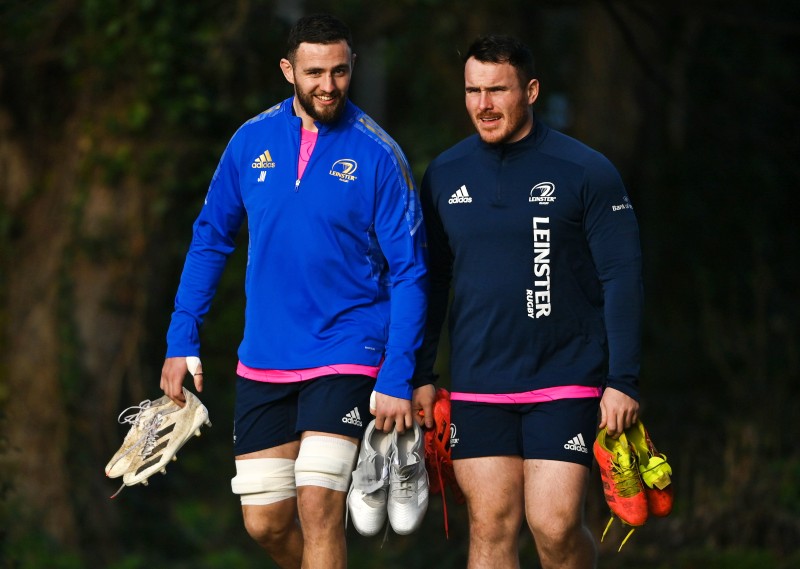 END_OF_DOCUMENT_TOKEN_TO_BE_REPLACED

Not only will Leinster head into next season with a squad shorn of experienced performers, they are strengthening inter-provincial rivals Connacht.

Ahead of their Friday clash with Connacht, at The Sportsground, Stuart Lancaster was focusing on the positives.

"Yeah, it is [a shame]. You get very attached to players you've coached for a long time. For me, personally, I've had a lot of good memories of the players that are leaving.

"But, as you say, there is a cyclical nature to the evolution of sports. At Leinster, in particular, the way it works is that we have these young players pushing through that are challenging for places - on the bench and for starts in the United Rugby Championship.

"We need to reward them, and give them opportunities, further down the line. I think the danger is that you can have the very same squad for the next two or three years, which is fine but up to a point. But I think constant evolution is the way to go, to be successful for the long-term in professional sport.

"So, rather than taking the same squad all the way through until its' end, you transition and bring a whole new group of players in... that is a hard way to do it. Whereas, you can do it where there's two out at the top and two in at the bottom. Evolution rather than revolution is the way to go, and I think Leinster do it well."

END_OF_DOCUMENT_TOKEN_TO_BE_REPLACED

The evolutionary case in point is that Leinster are promoting four players from their academy to their senior squad - Cormac Foley, Brian Deeny, Joe McCarthy and Jamie Osborne - while Jason Jenkins [Munster] and, reportedly, Charlie Ngatai [Lyon] are also on their way.

One player that Connacht head coach Andy Friend went further afield to get is winger Mack Hansen, picked up from the Brumbies. Lancaster speaks highly on the 24-year-old, who made a big impression for Ireland in the Six Nations.

"Yeah, he was a bit of an unknown quantity when he arrived at Connacht at the start of the season, but he's well known now and rightly so.

"The boys spent a bit of time with him in [Ireland] camp and they have a high regard for him as a person, and as a player. He's one of many threats. Bundee Aki may be potentially available. Across the board, they have threats that we have to be wary of."


popular
Cristiano Ronaldo 'agrees £173m-a-year deal' with Saudi club
"Nowadays, even if I don't hit a ball, I don't care as long as we win" - Gleeson learning from the past
Thibaut Courtois warns teammates after leaks emerge from Belgium camp
Argentina reach World Cup last-16 with convincing win over Poland
World Cup 2022 Day 11: All the major action and talking points
Damien Duff makes 'brutally honest' England World Cup prediction after Wales win
The FootballJOE Qatar World Cup 2022 Geography Quiz
You may also like
1 week ago
"Two Irish players are best in the world" - Rugby reacts to big Josh van der Flier and Terry Kennedy awards
1 week ago
Two baffling omissions as four Ireland stars make World Rugby 'Dream Team' of the Year
1 week ago
Josh van der Flier claims World Rugby Player of the Year at Monaco ceremony
1 week ago
"Highlight of my Ireland career" - Behind the scenes as Jack Crowley and Ross Byrne covered for a legend
1 week ago
Bundee Aki reminded us all of his best qualities, on a night Ireland couldn't do without him
1 week ago
Peter O'Mahony delivered some fitting Jack Crowley comments after surprise Test start
Next Page