For Siya Kolisi, this was once an outlandish dream.

Growing up in the impoverished town of Zwide, life wasn't about living, it was about surviving.

But as he practiced his skills with a brick that would become his favourite toy, at least he could imagine. Now, his faraway dreams have become a reality. He's the unexpected hero to millions of South Africans, their first ever black captain and both an inspiration and a beacon of hope to those who are struggling all over the world.

The fearsome English back row is nothing compared to the challenges this man has overcome.

Kolisi's mother was just 16 years of age when he was born, and his father was still in school. Luxuries were few, money was hard to come by and this youngster regularly went to sleep hungry.

His childhood would get tougher. His mother passed away when he was only 16 years of age and Kolisi was raised from then on, by his grandmother.

A disadvantaged beginning, but this fella was prepared to fight.

He eventually got his break in South African club rugby and ever since his South African debut in 2013, the flanker has become one of his country's most important and influential players.

Saturday morning was his date with destiny. Before Saturday, his dad had never left his home country but the skipper flew him out to the International Stadium in Yokohama for the big day. 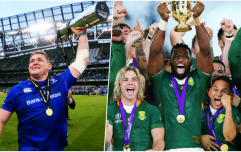 END_OF_DOCUMENT_TOKEN_TO_BE_REPLACED

Kolisi sang the national anthem with his eyes closed and with tears streaming down his face. Passion isn't the word. From then on, he'd mill England's vaunted crew out of the way through sheer determination and afterwards he gave an interview that inspired the world.

“We have so many problems in our country, but to have a team like this… You know, we come from different backgrounds, different races, and we came together with one goal, and we wanted to achieve it. I really hope that we have done that for South Africa, to show that we can pull together if we want and achieve something.”

“Since I have been alive, I have never seen South Africa like this. Obviously in 1995, what the World Cup did for us, and now with all the challenges we have, the coach just came and told us we are not playing for ourselves anymore, we are playing for our people back home.

A powerful interview from the South African captain.

Let this man run the world.pic.twitter.com/frMWMEhhKG

Spoken from the heart.


popular
"I was like, ‘My ear is hanging off my head. Can you not see that?!'"
"Hang on lads, there is more to life outside of Dublin" - Connellan is a rebel with a cause
The SportsJOE 12 o'clock quiz | Day 307
Japanese rugby players living off the classic Irish school lunch for pre-match-meal
QUIZ: Name all 50 of these 2000s Champions League players – #4
QUIZ: How well do you know Manchester United players of the 2010s?
QUIZ: Identify the missing sponsors from these football jerseys
You may also like
2 months ago
Brian O'Driscoll turns tables on South Africa after Ireland's World Cup draw
2 months ago
'It was stupid. You get things wrong" - Schalk Burger on that Luke Fitzgerald eye gouge
2 months ago
Springbok legend Schalk Burger delivers the goods on House of Rugby Ireland
3 months ago
Brian O'Driscoll tells the story behind his most famous tackle
5 months ago
South Africa doing a school yard pick of 60 players live on TV for Springbok Showdown
9 months ago
'They're not sure if we'll have live sports in South Africa for the rest of the year' - Jean De Villiers
Next Page