World Rugby have announced a series of law change recommendations as they look to improve the safety of the game.

World Rugby’s Law Review Group considered all available evidence in the evaluation of each proposal, including the six that were discussed at the recent player welfare and laws symposium in Marcoussis, France, and made the following recommendations to the Rugby Committee:

· Reduction in the number of permitted substitutions. RATIONALE: To encourage more space and opportunities towards the end of the game as on-field players tire. RECOMMENDATION: For World Rugby to sponsor more research to determine if there is a player welfare benefit.

· Off feet at the ruck – players must move away from the ball without delay. RATIONALE: To ensure more space and time is afforded to the attacking side. RECOMMENDATION: Specialist working group should be formed to assess all issues regarding the ruck/ breakdown.

· Delaying the movement of the defensive line at the ruck until the ball has reached the first attacking player or until the receiver opts not to pass. RATIONALE: To give the team in possession more time and space on the ball. RECOMMENDATION: Not to approve for trial.

· Reducing the tackle height to the waist. RATIONALE: Forcing players to tackle lower may reduce the risk of head injuries to both the tackler and tackled player. RECOMMENDATION: To approve for closed trials.

Beyond the Marcoussis outcomes, a number of other proposals were considered by the LRG and recommendations made accordingly: 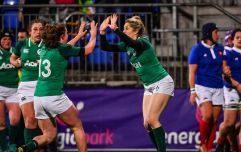 Huge surge in the number of females playing rugby

END_OF_DOCUMENT_TOKEN_TO_BE_REPLACED

· The introduction of an infringement (penalty and free-kick) limit for teams. Once a team has reached the limit, a mandatory yellow card is given to the last offending player as a team sanction. RATIONALE: To encourage teams to offend less. RECOMMENDATION: To approve for closed trials at NRC in Australia.

· The awarding of a goal line drop-out to the defending team when an attacking player, who brings the ball into in-goal, is held up. RATIONALE: To reward good defence and promote a faster rate of play. RECOMMENDATION: To approve for closed trials at NRC in Australia.

· A number of potential changes to tackle law were discussed by the group, with a particular reference to the community level in France. RATIONALE: To reduce injury rates in the domestic game. RECOMMENDATION: Approve for closed trials in designated FFR competitions.

Following a detailed discussion on the risks associated to front-row players’ necks during the scrum engagement process, the LRG also supported a proposed amendment to Law 19 (Scrum) that, if approved, will outlaw the practice of front-rows placing their heads onto opposition players’ shoulders between the call of ‘bind’ and ‘set’.

LRG Chairman John Jeffrey said: “This meeting is another important step on the road to further law improvement within the next four-year Rugby World Cup cycle. There is no doubt that the sport is committed in its collaborative effort to reduce injuries, particularly head injuries, and the outcomes from this productive meeting certainly underscored that approach.

“The level of expertise and engagement in the meeting was impressive. The members of the LRG clearly want what’s best for the game and are determined to make the sport as safe, simple and enjoyable to play as it can be at all levels. I look forward to considering the LRG recommendations with my colleagues from the Rugby Committee next month.”


popular
"Conor Murray was hung out to dry"
Kilkenny youngster pulls off the no-look hand-pass once more
"Ireland don't ever do anything different and that's the worry" - Mike Tindall
Georges St-Pierre discusses possibility of fighting Conor McGregor
Jacob Stockdale and Johnny Sexton not spared by English press
"If Murray is playing that first half for England, he's probably Man of the Match"
ROG hits the nail on the head assessing Ireland's performance
You may also like
8 months ago
World Rugby abandon controversial Nations Champiosnhip
11 months ago
Ireland could get relegated from Six Nations under new proposals
1 year ago
Ireland could play future Rugby Championship winners in world final
1 year ago
No room for Johnny Sexton after massive vote for world's best team
1 year ago
Johnny Sexton picks up World Player of the Year award in Monaco
1 year ago
Ireland may need to win another Grand Slam to claim World No.1 spot
Next Page