This may not be the end but it has all the hallmarks of a short, sharp goodbye.

Earls, Conway, Sweetnam, Chris Farrell, Keatley, Dillane, Marmion, John Ryan, Aki. Lots of players with lots to prove - and those were the ones that Joe Schmidt picked.

Zebo, O'Halloran, Bealham, Scannell, Carty, Carey, O'Donnell. Those were some of the men - a Connacht and Munster mix - that were left out of the Ireland squad.

END_OF_DOCUMENT_TOKEN_TO_BE_REPLACED

Simon Zebo will be the one to generate the most headlines [as he has here] because he is the established, highly-skilled Ireland international that has found himself out in the cold, seven months before his contract with Munster is up.

The versatile Munster back is off to France's Top 14 next season, on a three-year deal, but he is still not letting on where his next destination will be. It is likely to be Racing 92 but that is not the immediate concern. Right now, most rugby fans across the land are asking why the country's in-form fullback is not likely to play for Ireland this season.

Simon Zebo took only three minutes in Galway to prove what we all know https://t.co/15fFItj3yI

Zebo scored the opening try in Munster's 20-16 loss to Connacht, in Galway. Rassie Erasmus, the Munster director of rugby, paid credit to the 27-year-old for staying focused on the job at hand after a crazy couple of weeks. He commented:

"With all the stuff going around Zeebs, he has stayed level-headed and calm, and nonchalant to [not] let things get to him. He loves Munster and he's passionate about the team. He's also sad for leaving. we are happy for him - we're going to miss him and we're sad for the club - but we're so happy for him. He's a guy that deserves things like that.

"It's just the game. The professional game, where it's nobody's fault. We just can't afford that and he can't say no to an offer like that. Nobody's upset with him, and you could see today that he's fully committed to the cause." 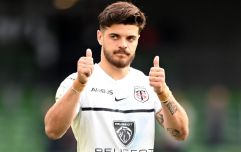 END_OF_DOCUMENT_TOKEN_TO_BE_REPLACED

Erasmus also revealed how the 35-times capped Zebo reacted to his omission from the Ireland squad.

"No, really not" he responded when asked if Zebo expected to be in the Guinness Series squad. 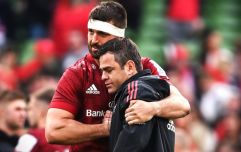 END_OF_DOCUMENT_TOKEN_TO_BE_REPLACED

"I think he expected that. I think the policy is quite clear, that guys from the outside are not going to make the team. I think, logically and if you look at Joe Schmidt's plans, he's building towards a World Cup and if he selects guys now that he is not going to play in the World Cup, that is besides the point. I don't think there's any hard feelings. as I said, I think Zeebs is pretty level-headed about that."

Erasmus says he never discussed selection policy with Schmidt and only found out about it on Thursday.

"I'm sure Joe must have discussed it with Simon," he said. "I'm pretty sure. Again, I'm saying Simon accepts it. He knows he is moving on at the end of the season so he's not at all bitter or wanting to prove people wrong. He just wants Munster to win, which we didn't tonight... so we've got some work to do."


popular
Frank Lampard pays emotional tribute to Seamus Coleman in front of Everton squad
No need for Sky Sports to apologise as Shane Lowry stays in PGA mix
Rangers legend says he and Roy Keane didn't speak during Man United spell
The breathless finish to the Joe McDonagh Cup that could potentially drag Tipp into the quagmire
Dele Alli praises 'legend' Seamus Coleman after Everton avoid relegation
PSG offer Kylian Mbappe 'complete control' with insane contract offer
Florentino Perez tells Real Madrid squad of Kylian Mbappe transfer U-turn
You may also like
1 week ago
Peter O'Mahony heroics in vain as Munster suffer shoot-out heartbreak
2 weeks ago
Conor Murray primed to face man that took his crown as world's best
2 weeks ago
Adding Mike Prendergast to Munster coaching staff makes all kinds of sense
3 weeks ago
8 Irish players we're trying our hardest not to get too excited about
3 weeks ago
URC chief explains why Irish Interprovincial Championship was not revived
3 weeks ago
Loved in Limerick, loved in Munster but Keith Earls always having to "re-prove himself"
Next Page