"All in all, it's been really good so far... long may it continue."

Simon Zebo was referring to home life in Paris with with fiancée Alvira and their three young children. The youngsters have 'had their moments' but Zebo is loving the opportunity to spend extra time with his family as France, like most countries around the world, goes into lockdown to help stop the Coronavirus spread.

END_OF_DOCUMENT_TOKEN_TO_BE_REPLACED

He is adjusting to life within a tight radius but remaining upbeat and optimistic. The 2019/20 rugby season has been put on a giant pause and Zebo is not the only player itching to finish what he started. Racing 92 are well placed in the Top 14 and Champions Cup and have a squad, he says, that 'fears no-one'.

On the latest episode of Baz & Andrew's House of Rugby, Zebo told Barry Murphy and Andrew Trimble about how he is staying (relatively) fit and (relatively) focused while looking to have 'as much fun as possible'.

He also spoke about a possible return home in the not too distant future, his uniquely tailored, and not too labour-intense, home work-outs and reminisced about a couple of big games in the red of Munster and green of Ireland. 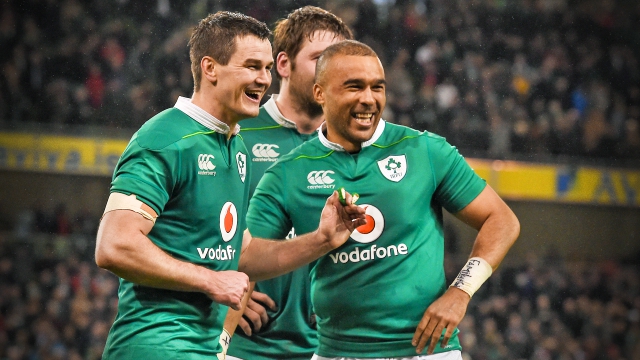 Jonathan Sexton, left, and Simon Zebo celebrate after a 2017 victory over England. (Photo by Brendan Moran/Sportsfile)

END_OF_DOCUMENT_TOKEN_TO_BE_REPLACED

"You're trying to incorporate a bit of training into the daily routine," says Zebo."Just before the lockdown and quarantine happened, Racing gave us the opportunity to come into the training centre and come take watt-bikes, dumb-bells, bar-bells, weights and bars. All that sort of stuff.

"No, I have two kettle-bells. One is 5kg and the other is 10kg. I'll do a bit of running as well. We have a big hill near to our house so I'm able to get out and do a few hill sprints. I wouldn't be very good at the weights, anyway. As ye know yourself, I'd be more of a runner."

END_OF_DOCUMENT_TOKEN_TO_BE_REPLACED

Racing teammates Finn Russell and Donnacha Ryan live nearby and have been doing their own bits and pieces but Racing, like so many other clubs, have encouraged their players to stay and train apart.

Despite the upheaval of every-day life, Zebo is in his usual high spirits and focusing on the silver lining that is clinging to the cloud.

"Keeping positive wouldn't be such a conscious thing on my mind, you know. I just notice, maybe from time to time if I start to get into a bad mood, I just snap out of it. I constantly have my kids around me and positive people around me. I wouldn't tend to surround myself with negative people too much, or as much as possible.

"So, yeah, every day is a new day and a challenge for me to attack it, go out and have fun. And try and make as many memories as possible, you know, before the show's over. Try build up a big book of memories. That's what I say to myself sometimes. Have as much fun as possible." 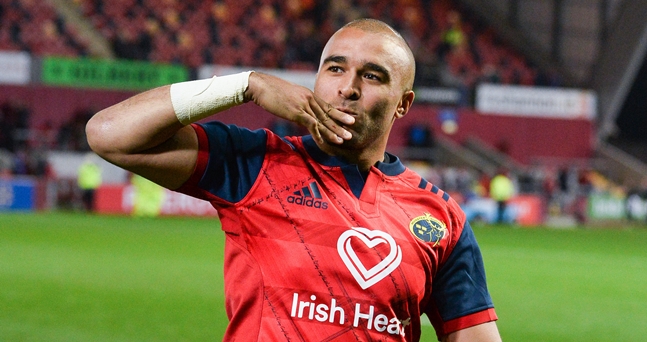 With so much uncertainty in the sporting world, Zebo is grateful that he is contracted with a strong Racing 92 side up until the summer of 2021. After that, there could be a return to Munster.

As much as he would dearly love to finish out his career at Munster, any decision he makes will be tough.

"The move to Paris couldn't have worked out better," he says. "It's been perfect from a rugby stand-point, from a lifestyle point of view, how my family has adapted, the language, my kids' schooling. There hasn't been one hiccup, where we've looked at each other and asked, 'What have we done?' Every day has been incredible. Even the bad days, you take them as well. It's all part of the experience.

"I've got to play with some amazingly talented players. You've seen some of the tries we're scoring. It's incredible rugby to be a part of."

"You never know how contract time goes," Zebo adds. "I'd imagine next season I'll be at Racing so, after that's, it's about seeing where I'll go or what I decide to do. We don't know how rugby will even be going on then. We'll see.

"I obviously love home, I love Cork, and I'd be a proud native. To play for Munster in Thomond Park has been incredibly special, and to have been able to go back there with Racing showed me again how special the place is, especially when they are baying for your blood! Yeah it [a return] is obviously something I'd love but you sometimes don't get what you want and your cards are dealt different ways. We just have to see how everything plays out."

Barry Murphy took it upon himself to tell Simon Zebo, in response, that 'the door is always open' and the vast majority of Munster and Irish fans would agree with that sentiment.

For the foreseeable future, though, it is family time, video catch-ups with folks back home, hill sprints and using those stretchy bands in lieu of those kettle-bells. A man has to allow some down-time during his down-time.