"My phone is always on" - Zebo hoping for World Cup call

On Monday, we put the question out on Instagram.

Who should Ireland play at full back next?

There's not exactly a lack of options but there's not one standout right now either.

Still, despite the six candidates, the same word kept firing through.

Although he might be in the form of his life, Simon Zebo isn't an option because he's plying that trade in France - only Johnny Sexton has managed to break that rule so far.

END_OF_DOCUMENT_TOKEN_TO_BE_REPLACED

But as Zebo gets better, Ireland's need grows greater and so does the demand for the son of Munster to be included once again in Joe Schmidt's squad.

And the Paddy Power Rugby Ambassador and columnist with Paddy Power News is very much open to that possibility.

“It's hugely flattering, it's really nice and it means a lot to me," Zebo told Paddy Power of the idea that fans are clamouring for him.

"Especially when you are playing out of the country and there's still so many people that think so highly of you back home who want to see you wearing the green jersey. I'll just keep on chasing and trying to give the coaches a few headaches by playing well.

"Hopefully, we'll go a long way in the tournament in the Champions Cup with Racing and do well in the Top 14, like we've been doing.

"All I can do is play my best rugby and give them decisions to make come World Cup time. For now, I'll lay low, under the radar and keep doing my best. That's all I can do.”

Actively trying to get back into the national team, Zebo is keeping an eye on both phones to see if he's going to get a call before the World Cup.

“My phone is always on. I've two phones and they both work, so we'll have to see.” 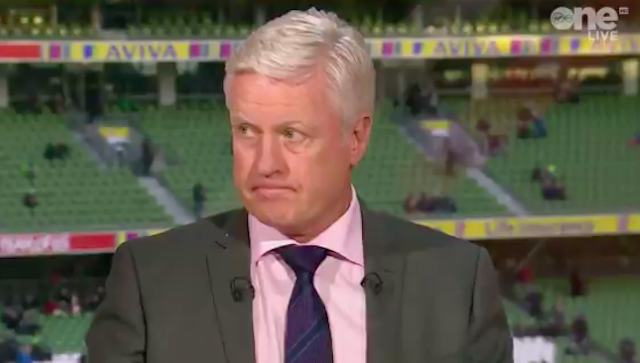 Matt Williams wasn't in the mood for pulling punches on Saturday night. In a sobering night for I...

The interest in the Cork man has accelerated with the full back display against England on Saturday.

Despite the entire team being outplayed, Rob Henshaw was playing as the last line of defence for the first time since his Connacht days and it showed against one of the best teams in the world.

“It was a big talking point for sure, but Robbie Henshaw is a world-class player," Zebo told Paddy Power.

"He's a Lion, he's a Grand Slam champion and a Champions Cup winner. He's a proven performer. Everyone can have an off day and that was probably it. I touted him to go in and have a stormer, but it just wasn't to be.

"He just had a little off game and he hasn’t played at full-back in years, so you can't fault the guy really. I reckon he'll be more used to the intricacies of the position, how to cover the grass a little bit more after playing because you can train all you want but the difference is playing it in a match. The rust will be knocked off him now and if he gets selected there again, he'll be all the better for it."

But will Ireland be all the better for Zebo's recall?


popular
The SportsJOE 12 o'clock quiz | Day 113
Jack Charlton's role in getting Roy Keane to Manchester United has been revealed
Can you name every English football league club that begins with 'S'?
"Never back against the Irish" - How the BBC covered our USA 94 win over Italy
Roy Keane on the experience of being managed by Jack Charlton at USA 94
Max Holloway's class gesture after controversial UFC 251 loss transcends the sport
Dublin club Man O'War suspends all training and matches after positive Covid-19 test
You may also like
8 months ago
How Rassie Erasmus got the best out of Cheslin Kolbe and Simon Zebo
1 year ago
Watch: Simon Zebo scores stunning hat-trick against Perpignan
1 year ago
Simon Zebo shows incredible footwork to set up Donnacha Ryan try
1 year ago
Dan Carter will be playing with Simon Zebo for the rest of the season
1 year ago
Joe Schmidt's full-back call is the big decision of this campaign
1 year ago
'Zebo is on fire but Joe is not going to change his mind' - Andrew Trimble
Next Page