In July 2014, Sean O'Brien was asked how he thought his body would be after he retired. "Broken up," he replied.

The man affectionately known as The Tullow Tank is in for running repairs again.

O'Brien tore his hamstring again, in February's narrow defeat to France. At Ireland's training session at Mullingar RFC, Schmidt confirmed the worst - O'Brien would miss the rest of the championship.

END_OF_DOCUMENT_TOKEN_TO_BE_REPLACED

Rested for the Six Nations opener against Wales - with a tender hamstring - O'Brien looked Ireland's best player in Paris as they started with menacing intent.

Then, 18 minutes in, his injury jinx struck again. He hit the deck inside his own half and knew his race was run. Here we go again.

For fans and rugby writers, it was a depressing sight. For O'Brien, it must have been deeper malaise. His anguished face told us everything we needed to know. 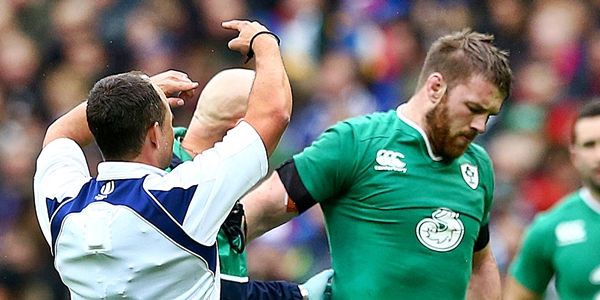 END_OF_DOCUMENT_TOKEN_TO_BE_REPLACED

Ireland readied Tommy O'Donnell and soldiered on. At this stage, it has become second nature. When O'Brien missed the away trip to Twickenham, to face England, it was the 15th Test he has missed out of Ireland's last 27.

It was not always this way.

O'Brien made three appearances in 14 Tests from November 2009 to February 2011, when he was just breaking into the Test set-up. Once he started the 2011 Six Nations match against Italy, he nailed down a place in the back row and was a near-constant presence.

He appeared in 28 of the next 35 Tests, for Ireland and the British & Irish Lions, and looked comfortable in the world-class bracket.

END_OF_DOCUMENT_TOKEN_TO_BE_REPLACED

In December 2013, he badly injured his shoulder against Ulster and began a downward injury spiral. He eventually required multiple surgeries on that shoulder and missed 11 Tests in a row for the national team.

PERCENTAGE OF GAMES O'BRIEN HAS PLAYED FOR IRELAND 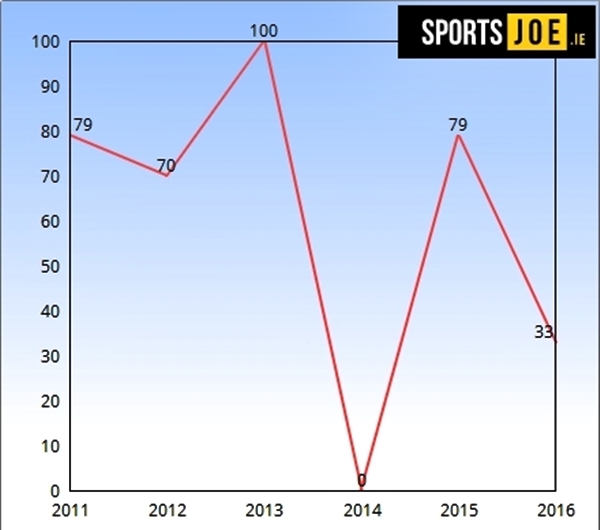 Former Ireland teammate Stephen Ferris describes O'Brien as 'an absolute bull' and one of the toughest opponents he has played against. He also notes that O'Brien has almost had 20 surgeries in his eight-season career. O'Brien is 28 years old.

Unfortunately, it has gotten to the stage where an O'Brien injury is expected. Life goes on.

Joe Schmidt told us, in early February, that he left the Leinster man out of his squad for the championship opener as he was mindful of O'Brien pulling his hamstring again, as he did in the warm-up for the Italy game last year.

These incidents, and they are getting longer for O'Brien, now play in the mind of his coaches and teammates.

At Ireland's training base at Carton House, he set out to prove he was ready to go. In training, Schmidt said he was immense. He passed every marker set for him.

So, rather than continue with Tommy O'Donnell, who had a fine game against Wales, Schmidt rejigged his back row. We all applauded it. CJ Stander, O'Brien and Jamie Heaslip in tandem. What could go wrong?

In Paris, it took 18 minutes to find out. 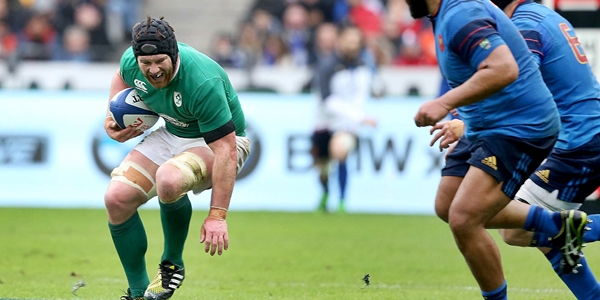 O'Brien had a Grade Two tear but, not for the first time, it turned out to be worse than first expected.

By the time the Italy game came around, on March 12, Ireland had Josh van der Flier two Tests into his career. Rhys Ruddock, Jordi Murphy, Tommy O'Donnell, Jack Conan all waiting in the wings. Jake Heenan becomes Irish qualified at the beginning of next season and Peter O'Mahony should be back.

Even typing that feels wrong but Schmidt may have to make a decision on O'Brien sooner rather than later.

Does he rely on a man who can bring a thunderous fury and attacking purpose every time he pulls on the jersey or does he opt for a safer yet less combustible option?

Make no mistake, a fully fit Sean O'Brien is our best back row.

Ireland will be doing well if they see him line out for them again this year. Another surgery awaits over the summer. Another batch of intensive rehab.

One hopes he can get back, stay fit and consistency deliver on the potential all Irish fans saw from the moment he took the ball in hand and horsed through any Fijians foolish enjoy to stand in his way.

*Updated from a piece first published on February 19


popular
David Meyler on how Kenny Dalglish almost signed him for Liverpool
QUIZ: You have 60 seconds to answer one Premier League goalkeeper question
Sean O'Brien could get to play England, at Twickenham, in his final game
Boris Johnson slams Jurgen Klopp for defending Liverpool fans booing national anthem
Gearoid Hegarty's harsh red card leads to a heated debate in The Sunday Game studio
"I think there are only five Kilkenny players who are guaranteed to start on any given day" - Cody's motivational methods
Jamie Vardy says 'Wayne Rooney is talking nonsense' about telling his wife to 'calm down'
You may also like
2 weeks ago
Eddie Hearn hints at Katie Taylor v Amanda Serrano rematch in Ireland
3 weeks ago
England scrumhalf gets away with clear strike on Ireland's Michelle Claffey
3 weeks ago
Munster announce signing of French centre who can play for Ireland
1 month ago
Stacey Flood and Sam Monaghan star as Ireland get first Six Nations victory
1 month ago
Shamrock Rovers still look strongest of Dublin's five Premier Division teams
1 month ago
Sean O'Brien on his two best games in an Ireland jersey
Next Page