Desperate news for the Leinster hooker who, at 33, is most likely competing at his last World Cup.

News has emerged from Japan that Sean Cronin's World Cup is over.

The BBC is reporting that Cronin picked up an injury in training and that he is due to return home in the coming days.

Cronin's place in the Ireland squad will be taken by Ulster hooker Rob Herring, who himself injured his back in a warm-up game against Italy. Herring is back playing for Ulster now and becomes the second injury call-up to head for Japan. 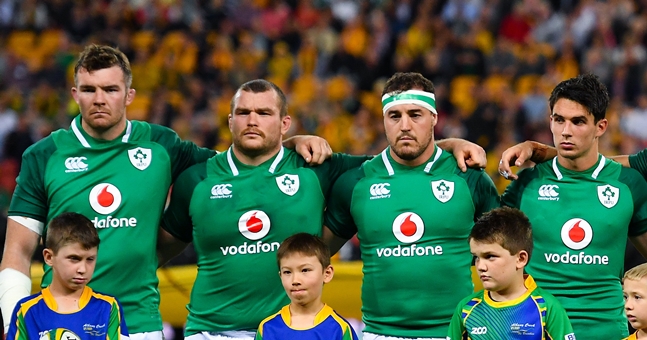 Rob Herring (with strapping around his head) pictured on Ireland's 2018 tour of Australia. (Photo by Brendan Moran/Sportsfile)

Jordi Murphy, Herring's Ulster teammate, was called up a fortnight ago after Jack Conan fractured his foot two days before the pool stage loss to Japan.

Cronin was in line to deputise for starting hooker, and Ireland captain, Rory Best but Munster's Niall Scannell is also in contention. On Thursday, Schmidt will name his match-day squad to play New Zealand in the World Cup quarter finals.

Even if he arrives in Tokyo promptly, it would be a gargantuan ask to pitch Herring straight into action this weekend.

Official conformation from the IRFU on Cronin's fitness may not arrive for several hours as, as of publishing this post, it is nearing 10pm local time.

END_OF_DOCUMENT_TOKEN_TO_BE_REPLACED

popular
QUIZ: You have 30 seconds to answer this one tricky football question
The SportsJOE 12 o'clock quiz | Day 286
You'll have to be a diehard fan to get 20/20 in this Liverpool players of the 90s quiz
SportsJOE 2000s Football Quiz | Round 11
Here's a list of 23 people who own a greater share of the UFC than Conor McGregor
Conor McGregor mentions title outsider when quizzed on next opponent
Wayne Rooney story about Memphis Depay shows why he failed at Manchester United
You may also like
6 days ago
Darren Cave tells House of Rugby about one part of rugby he definitely doesn't miss
6 days ago
"He's ruptured his hamstring off the bone and he’s trying to get up into the defensive line"
2 weeks ago
"I got the scan and it was literally broken in half" - Ciara Griffin on her first Ireland training session
1 month ago
"I don’t know what his problem is with me" - James Lowe on Liam Williams clash
1 month ago
James Lowe joins House of Rugby to talk Test debuts, Liam Williams and Chris Ashton
1 month ago
Brian O'Driscoll turns tables on South Africa after Ireland's World Cup draw
Next Page