Matchday six of the Rugby World Cup and we saw the biggest shock yet.

Uruguay Vs Fiji in Pool D and the South American underdogs pulled off the shock of the tournament.

Uruguay began their World Cup campaign against the islanders who lost their opening clash against the Wallabies last Saturday. The South Americans were competing in their fourth World Cup and came into the match having not completed a competitive game since June. Additionally, Fiji has triumphed in all three prior meetings between these two sides but today would serve to alter that storyline rippling the fabric of history for good.

Touchingly, the Kaimaishi stadium which hosted today's showdown was built in the wake of the tragic 2011 Tsunami as a memorial; and as such the teams and fans held a minute's silence before kickoff.

As the game rumbled into life, Uruguay got off to a sprightly start forcing Fiji on the back foot with some handling errors and putting in some solid tackles when necessary.

8 minutes into the encounter and Fiji made their mark on the scoreboard from hooker Mesulame Dolokoto after an attacking line-out. Josh Matevesi attempted a conversion but the ball ended up wide with the scoreline at 0-5 to Fiji. 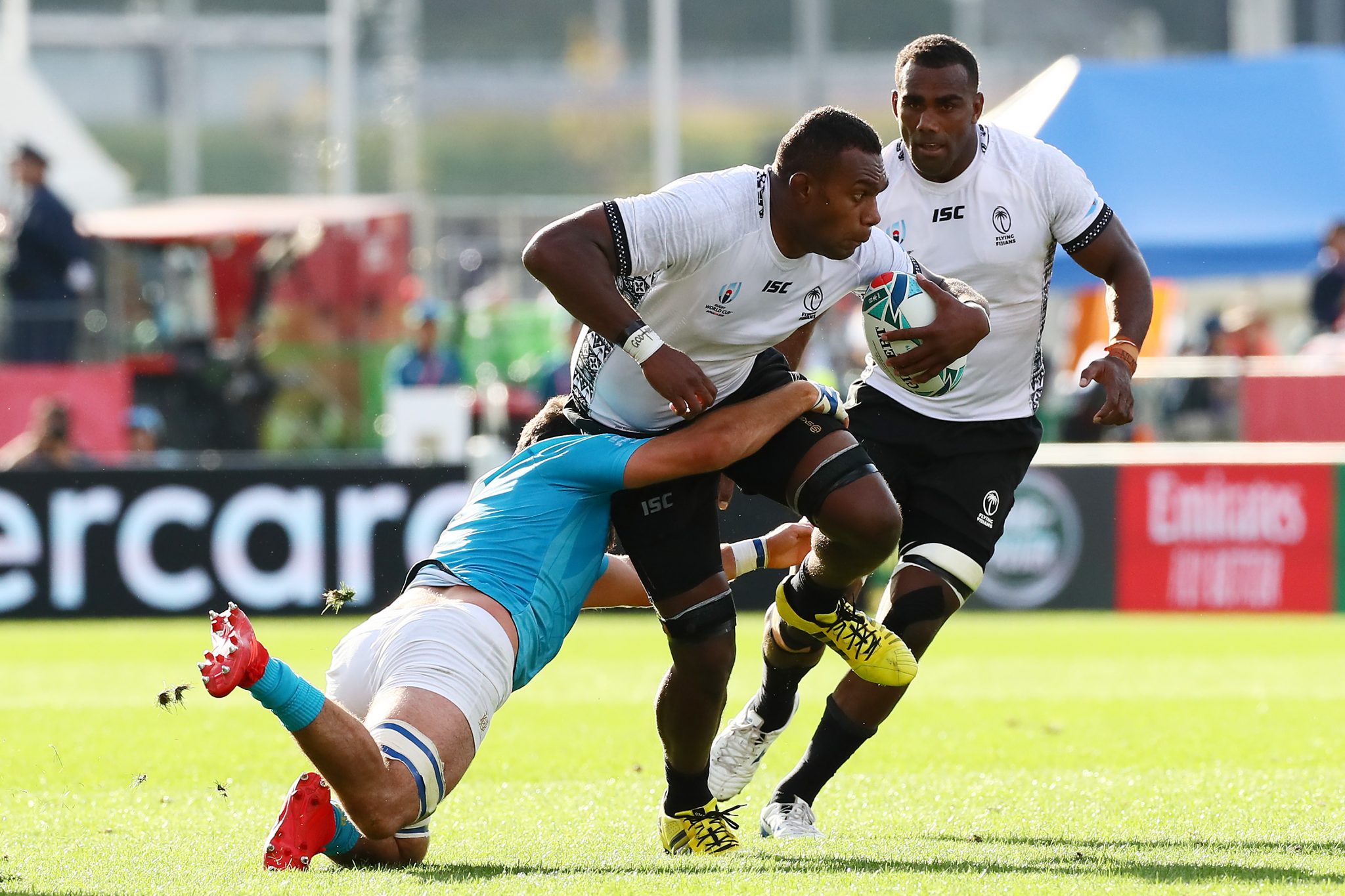 Despite the setback, Uruguay kept it at with front foot play and their efforts were rewarded in the 15th Minute as Santiago Arata pounced on some poor handling by Fiji before dancing past three tackles to neatly touchdown under the posts. Felipe Berchesi converted to launch Uruguay into the lead.

END_OF_DOCUMENT_TOKEN_TO_BE_REPLACED

The entertainment factor certainly didn't abate as four minutes later Fiji responded with a try courtesy of Eroni Mawi who scored from just a metre out following Fiji's persistence within the South American 22. Matevesi grabbed the extras to put Fiji five points in the clear. 12-7 to Fiji it stood.

Fans were denied any opportunity to draw breath as just three minutes later Uruguay roared back into contention with a try from Manuel Diana who got the ball over the line following some nicely worked phases from the line-out. Once again, Berchesi converted once again to pop Los Teros back into the lead.

In the 26th minute and keeping with the tone of the game, Uruguay completed a brilliant move to free Centre Juan Manuel Cat who scored with a diving celebration. The scoreline read 12-21 to Uruguay as Berchesi converted yet again.

As the minutes wore on, the Fijians were struggling to get into a set rhythm and momentum with the South Americans holding firm.

Just two minutes before halftime and Uruguay were granted a penalty after a clash of heads between Juan Manuel Cat and Api Ratuniyarawa. Once again, though Brechesi made no mistake to further Uruguay's lead by 12 points as halftime arrived to offer some much-needed relief to the two teams.

As the second half kicked on, Fiji had it all to do to get back into the game to ensure a prospect of being able to exit the group with some certainty.

Fiji had managed 13 handling errors so far in the match with some being capitalised upon by their opponents. 45 minutes into the game however and the islanders had a penalty which was subsequently missed by Matevesi and kept the deficit unchanged at 12 points. 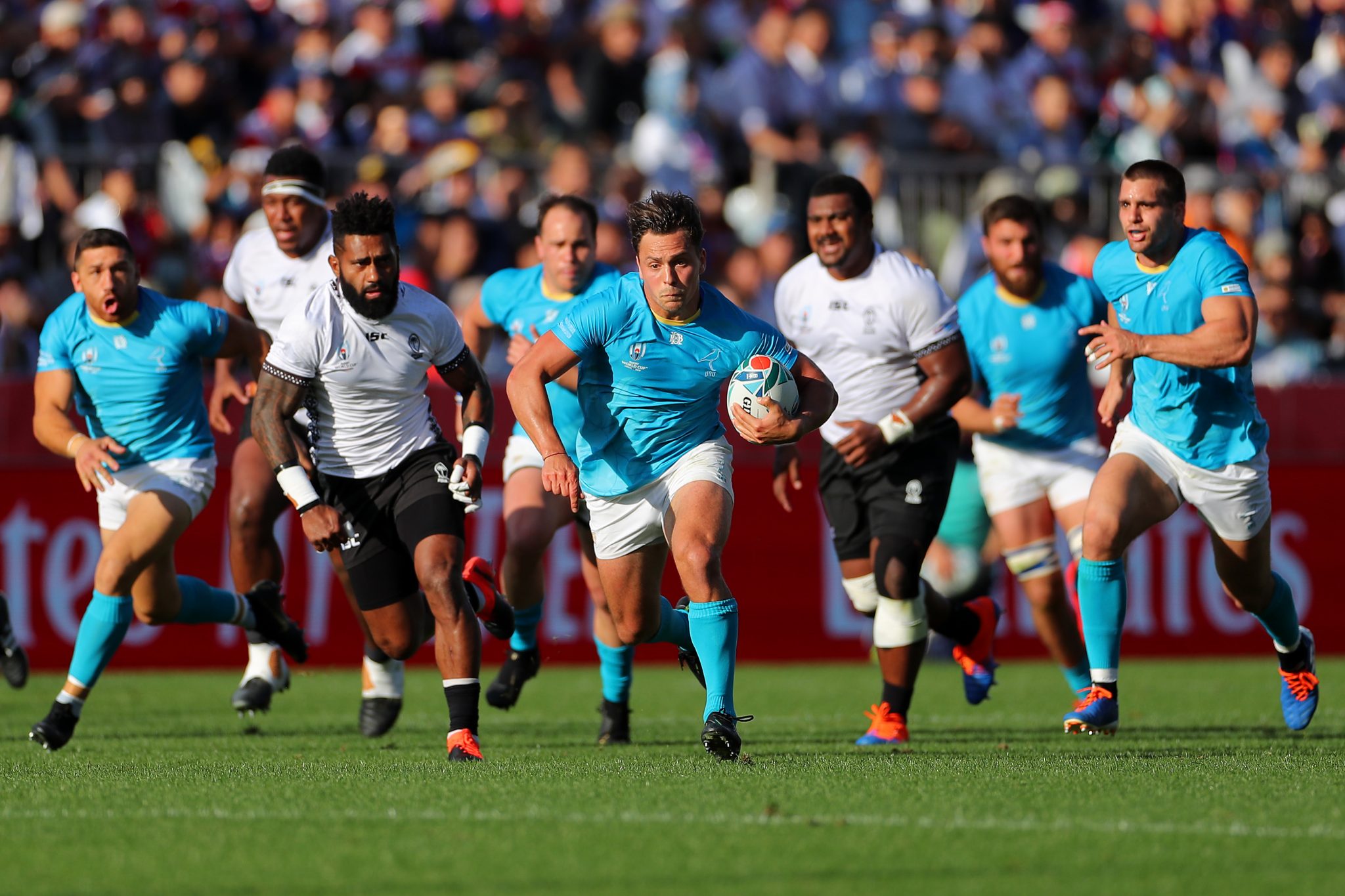 END_OF_DOCUMENT_TOKEN_TO_BE_REPLACED

48 minutes into the high flying match and Fiji fought back with a try as Ratuniyarawa bundled the ball over the line and Matavesi missed the resulting conversion. 17-24 to Uruguay it stood.

55 minutes in and Uruguay were awarded a penalty after Fiji was adjudged to have moved the ball on the ground. Berchesi ended up missing though to keep the score at 17-24 with less than 30 minutes left to play for.

Five minutes later though and the Los Teros would get another chance to extend their lead with another penalty. Berchesi converted with a sweet kick for a scoreline of 17-27 as the game entered the final quarter.

67 minutes in and Nikola Matawalu hauled Fiji back into the contest with a try after breezing through a gap from two metres out and Ben Volavola missed the conversion to keep Uruguay in the lead by five points.

As the game entered the final ten minutes, both teams showed signs of fatigue and in the 75th minute, Uruguay was awarded another penalty and Berchesi did well as the ball sailed through the posts to put Uruguay 8 points ahead with five minutes to go until full-time. The South Americans were on course for their first-ever victory against the Island nation.

And to finish with an astonishing flurry, Fiji fought back in the dying embers of the tie to land a try at the hands of Matawalu. Volavola's conversion attempt hit the post as full-time arrived.

Just a three day turnaround from their 39-21 loss to Australia wasn't kind on Fiji.

Speaking after the game to the BBC, Fiji captain Dominiko Waqaniburotu said:

"Everything went wrong out there, it's not the result we wanted.

We underestimated a very good Uruguay team, congratulations to them."

"I'm really proud of my country, we're not the biggest or tallest but we came here to win, we have been preparing for four years.

We've never had anything granted, we always have to qualify first and you saw the passion."

There can be little doubt that this was the one of the most if the most entertaining tie of the tournament so far. Neither side gave up till the end but it was Los Teros who came away with the honours with their first-ever victory over the Fijians and just their third victory in WC history. Fiji will be disappointed as now their hopes of quarterfinal seem pretty quashed but they will aim to recover for their next clash against Georgia.

30 - @RugbyUruguay have picked up their third @rugbyworldcup victory and their first since 2003, their tally of 30 points against Fiji was their most in a match at the tournament. Vamos.#RWC2019 #FIJvURU pic.twitter.com/LoxJc1Q3HM


popular
Roy Keane's first impression of Cristiano Ronaldo proved to be very accurate
The 14 Irish players Down Under as TG4 come up with the goods once again
The SportsJOE 12 o'clock quiz | Day 290
Lady Gaga will perform Satanic ritual during Super Bowl halftime show, according to conspiracy theorist
"I have more work done than any player in Ireland" - The Trevor Giles tribute show
Joe Rogan doesn't agree with giving McGregor a rematch against Khabib
Pesky penis interrupts important Conor McGregor phone call

You may also like
1 week ago
"He's ruptured his hamstring off the bone and he’s trying to get up into the defensive line"
1 week ago
"We'll start playing touch, shall we?" - Liam Williams' angry red card reaction
1 week ago
Munster secure victory after thrilling Connacht comeback in Galway
1 week ago
Kyle Sinckler issues apology as TV audio picks up referee abuse
2 weeks ago
Fijian player sent off for picking the referee up in celebration
2 weeks ago
Leinster remind Ulster who's boss with impressive second half swagger
Next Page