"Put them to work over here. Get like, yeah the English come over here and do a bit of building for us!"

Saracens are facing up to the reality of being in the English Championship, next season, and losing a host of their big stars.

END_OF_DOCUMENT_TOKEN_TO_BE_REPLACED

The three-time European champions, who also collected five Premiership titles in the past decade, were left reeling over the weekend when Premiership officials handed down the sanction.

While many of the details of the club's salary cap breaches have yet to be released, Exeter chairman Tony Rowe told the BBC the club refused to allow a forensic audit on their books and, instead, accepted the relegation punishment. The club were also told they would need to slice another £2 million off their players' wage bill and there were threats of them being forced to hand back league titles from any year they breached the salary cap.

The fall-out from the salary cap scandal was discussed by Barry Murphy, Andrew Trimble and Jerry Flanery on the latest episode of Baz & Andrew's House of Rugby, including reports from England that Saracens are considering loaning players out to Irish provinces. 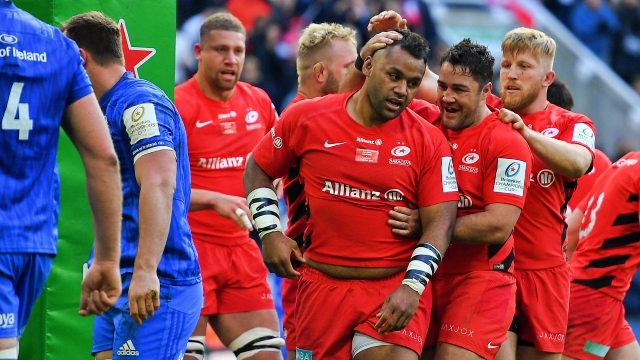 Saracens are already set to start next season without George Kruis and Liam Williams while the likes of Juan Figallo, Calum Clark and Michael Rhodes may also move on. On Sunday, Saracens director of rugby Mark McCall told The Daily Mail:

It is noted, in that same piece, that the club is considering loaning several stars out for next season to Irish provinces. At present, at least half of Premiership clubs are loaning out players in order for them to stay within salary cap regulations.

END_OF_DOCUMENT_TOKEN_TO_BE_REPLACED

The idea behind loaning players out to Ireland would be to give them competitive rugby but avoid sending them out to rival clubs in England. To this end, Scottish and Welsh clubs would also be in the reckoning.

That leaves Saracens with a big choice to make - do they loan out established stars like Owen Farrell, Maro Itoje, Elliot Daly, Jamie George, and more, or do they let the likes of Ben Earl, Many Vunipola, Alex Lozowski and Nick Isiekwe go for a season? According to McCall, the club will not stand in the way of any player looking to move on.

Looking at the current Saracens squad, here are four players that could fit in well at each of the Irish provinces.

Although a province or two would, understandably, be tempted to draft in some proven talent for a season or two, the final call would need clearance from the IRFU.


popular
QUIZ: How many of the 10 most successful football counties can you name without making a mistake?
Conor McGregor and Floyd Mayweather 'in talks' about a rematch
Éamonn Fitzmaurice explains Aidan O'Shea's best position and how it can be used against Kerry
Matt Le Tissier says he asked Sky Sports why they never sacked Jamie Carragher
Patrick Vieira claims he was 'much better' than Roy Keane in new interview
Steve McClaren issues warning to Man United players
Two All-Ireland quarter-finals to be streamed exclusively live on NOW
You may also like
1 day ago
Join our ultimate sports quiz in Dublin for a chance to WIN a trip to a Premier League game
2 months ago
Join Munster legend Billy Holland for this free mortgage masterclass
4 months ago
[CLOSED] COMPETITION: WIN a two-night stay at the luxury Trident Hotel in Kinsale Harbour
6 months ago
Here's where you can find some incredible deals on exercise machines in 2022
6 months ago
WATCH: This clip shows just how amazing amateur clubs in Ireland really are
6 months ago
Pieta and Shane Carthy encourage people to take part in #HopeOverSilence this Christmas
Next Page