For Bundee Aki, Saturday morning's clash with Samoa was a roller coaster of emotions.

It all started with the Samoan Haka. If things had worked out differently, Aki could easily have been on the other side of the line in Fukuoka.

He could easily have been wearing the blue jersey, representing the land of his mother and father and lining up alongside some of his closest friends.

Snap out of it.

These boys ain't afraid of no Samoan Haka pic.twitter.com/z6I3ecfhDK

Aki did just that. He started well in Ireland's final pool game, barrelling into a few tackles with his customary zip and force. After a disappointing game last time out against Russia, he had a point to prove and he was a man on a mission.

END_OF_DOCUMENT_TOKEN_TO_BE_REPLACED

But in the 28th minute, it all boiled over.

A careless pass to Stockdale saw the ball break between Aki and Samoan 14 Ah See Tuala. The ball hopped back towards out half Seuteni and with a legitimate chance of winning it, the Connacht club man Aki put the head down and tore after it.

Before he knew where he was though, he was thumping head height into the sliding number 10. Aki's tackle was high and given the way this World Cup has been officiated, he was always in bother. 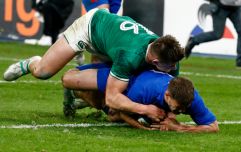 END_OF_DOCUMENT_TOKEN_TO_BE_REPLACED

Referee Nic Berry duly issued the red and with that, Aki's game and his tournament was over. Going on the laws that are currently in place that hit by Aki is on course for a ban of four to eight weeks.

Ireland may appeal the decision, but the likelihood of the red card being overturned is a slim one. 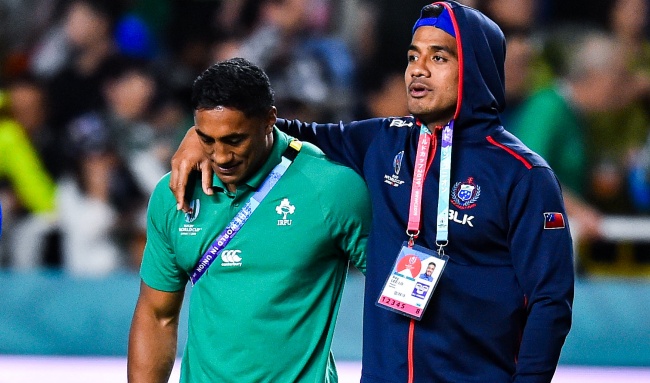 Nonetheless, the Samoans are doing their very best to ensure this isn't the end for Aki. Their manager Steve Jackson was speaking to the assembled media after the game when he called on the powers that be to 'see some sense.'

He also nodded that Samoa will do everything within their power to help get Aki's ban overturned.

"Hopefully the powers that be see some sense. I hope no further sanctions will be taken against Bundee. We will do everything we can to make sure he gets on the field next week."

Listen to the Samoan comments on the Aki incident here.


popular
“Players flourished when Roy Keane left” - Rio Ferdinand on why Keane was a 'detriment' to Man United
Man United considering loan move for Christian Pulisic
"To be able to call myself the fastest man in Irish history is just amazing" - Olatunde overjoyed after record-breaking run
The FootballJOE Pub Quiz: Week 50
Specsavers troll former Liverpool star for Darwin Nunez headbutt claim
Wexford, Waterford and Kilkenny down some good men as Australia calls
The moment Israel Olatunde realised he qualified for the Euro 100m final is what it's all about
You may also like
6 months ago
France v Ireland: TV channel and team news ahead of Six Nations clash
6 months ago
Australia legend raves about Mack Hansen after stunning start to Ireland debut
11 months ago
No Simon Zebo or John Cooney as Ireland gather 50 players for one-day camp
1 year ago
Sean O'Brien names top three managers he's ever had, gets called out on it
1 year ago
Irish star's retirement from international rugby could be good news for Dublin GAA
1 year ago
"There's bigger things than finishing the Six Nations" - Farrell
Next Page