"Sadly at this point in time, it's Johnny" - Why Sexton missed Lions spot

There will be no trip to South Africa for Johnny Sexton, who has been omitted from Warren Gatland's British and Irish Lions squad.

Dan Biggar, Owen Farrell and Finn Russell were selected ahead of the Dubliner, probably in that order, as a run of concussions and injuries appears to have denied the fly-half the opportunity to take part in the third Lions tour of his career.

It's still unclear whether the concussion picked up against Exeter, which kept Sexton out of Sunday's Champions Cup semi-final against La Rochelle, has cost him his place with assistant coach and former Wales international Neil Jenkins, after his share of waffling, hinting that 'durability' was taken into account as the coaching team made their decision. 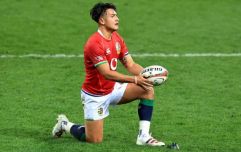 END_OF_DOCUMENT_TOKEN_TO_BE_REPLACED

"It's obviously very tough on Johnny Sexton," said Jenkins. "He's a brilliant player. His goal-kicking this Six Nations has been very, very good.

"Best I've seen him kick off the floor especially," Jenkins added, as the lavish praise that will mean nothing to Johnny Sexton went on and on.

James Ryan, CJ Stander, Garry Ringrose and Keith Earls are among our other notable absentees. pic.twitter.com/MWyqaoRZgS

"He's been exceptional in terms of this Six Nations, but the other guys have been good as well."

"It's very, very tough when you've Dan Biggar, Finn Russell and Owen Farrell and Johnny and someone was going to miss out obviously. Finn missed out four years ago, this time it was Johnny. I don't think there's an easy way to go around it because he is a fantastic player and it was very difficult to pick between the four of them but sadly, Johnny has just missed out."

After all the waffle, where's the meat for the bones? 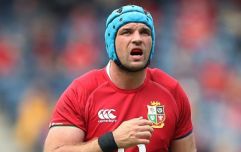 END_OF_DOCUMENT_TOKEN_TO_BE_REPLACED

"There is a little bit of concern about the concussions and that," Jenkins added when pushed on the subject.

"There is no doubt about that but that's obviously for the medical staff and the medical side of things and there's a little bit of durability...we're not questioning that he's a fantastic player. It's just very difficult in terms of where we're going, the presence they're going to bring and the other boys are very good themselves. It's very difficulty for whoever's missing out, someone was going to be extremely disappointed and rightly so. Sadly, at this point in time, it's Johnny."

Speaking not long after, the head bottle-washer Gatland confirmed that durability, more-so than concussion, had cost Sexton his spot.


popular
"It’s hard not to respect Johnny, even if you don’t like him!" - Dan Biggar
Martin McHugh: Them lads were stronger than the modern day player who's lifting weights all the time and doing no manual work
"I was in the Blackrock end goal looking up to the heavens saying, "Get us through it" - Kerins following his late father's footsteps
Quiz: Which footballer has played more times for Ireland?
Dessie Farrell set to cut large chunk of Dublin players as panel is reduced for league campaign
Sky Sports presenter explains why Roy Keane and Graeme Souness are so critical of players
"I missed two senior championship games in the Gaelic and it was eating me up inside" - Bradley-Walsh getting a lot done
You may also like
8 months ago
"I’d love to do my Colin Corkery impression and play Junior B football. It depends on the body"
9 months ago
"It's going to be the biggest thing in this person's life, ever" - Rory Best reveals his Lions captain pick
10 months ago
Robbie Henshaw one of three Irish players deserving of Lions Test XV
11 months ago
Lions back three calls highlight Ireland's place in new world order
1 year ago
2021 Lions Tour may now see Springboks playing in Dublin, Cardiff, Edinburgh and London
1 year ago
Current Lions XV pecking order does not look good for Irish stars
Next Page