Ryle Nugent to return to commentary booth for November internationals

RTE's former head of sport Ryle Nugent will return to the commentary booth for Ireland's November internationals next month.

Channel 4 won the UK territory rights for the games from Sky Sports last month and will provide live coverage of Ireland’s three home games alongside RTÉ, who renewed their agreement with the IRFU last year to broadcast free-to-air rights for the Autumn internationals until 2021.

The long-time rugby commentator left his role of Group Head of RTÉ Sport in February after 24 years with the national broadcaster and said that he felt that it was time for him to move on from his role.

"After eight years as Group Head of RTÉ Sport, I've decided that it's time for me to move on to take up new challenges," said Nugent. 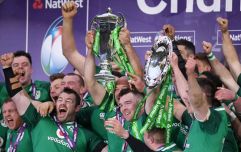 END_OF_DOCUMENT_TOKEN_TO_BE_REPLACED

"The last eight years as Group Head have been a genuine privilege and the most rewarding of my career, but as we head into what would be my ninth season at the helm, ninth GAA Championships and third World Cup, I feel its time to hand the baton on."

Joe Blake-Turner, Channel 4's Commissioning Editor for Sport, said of the British broadcaster's agreement to broadcast the Autumn internationals: "Rugby fans can look forward to a match-up between the number one and number two teams in the world, Ireland and New Zealand, on Saturday, November 17.

"And looking beyond 2018, Ireland have some fantastic Test matches lined up against the might of the southern Hemisphere, including Australia and South Africa. We're absolutely delighted to be able to follow the journey of Europe's finest team as they take on the world's best."

Padraig Power, IRFU Commercial & Marketing Director, commented: "The IRFU are delighted to welcome Channel 4 who have a fantastic track-record of sports broadcasting. They join us at an exciting time and we have no doubt that our partnership with them will cover some outstanding rugby moments."