This weekend sees the pool stages of the 2019 Rugby World Cup wrap up and there are still six spots in the quarter finals up for grabs.

Only England and France are automatically qualified for the knock-out stages but New Zealand and South Africa have one foot and 80% of the other foot through to the quarters. Australia and Wales look home and hosed too.

Ireland may yet have their final pool game against Samoa disrupted by Typhoon Hagibis, due to make landfall on Saturday, although some weather tracking has the typhoon hitting Tokyo hard, as opposed to Fukuoka.

There is still a lot to play for but, after almost three weeks of action, several players have caught our eye. On the latest episode of Baz & Andrew's House of Rugby [from 52:00 below], Barry Murphy, Andrew Trimble and Jerry Flannery debated the 'Best XV' of the tournament so far. 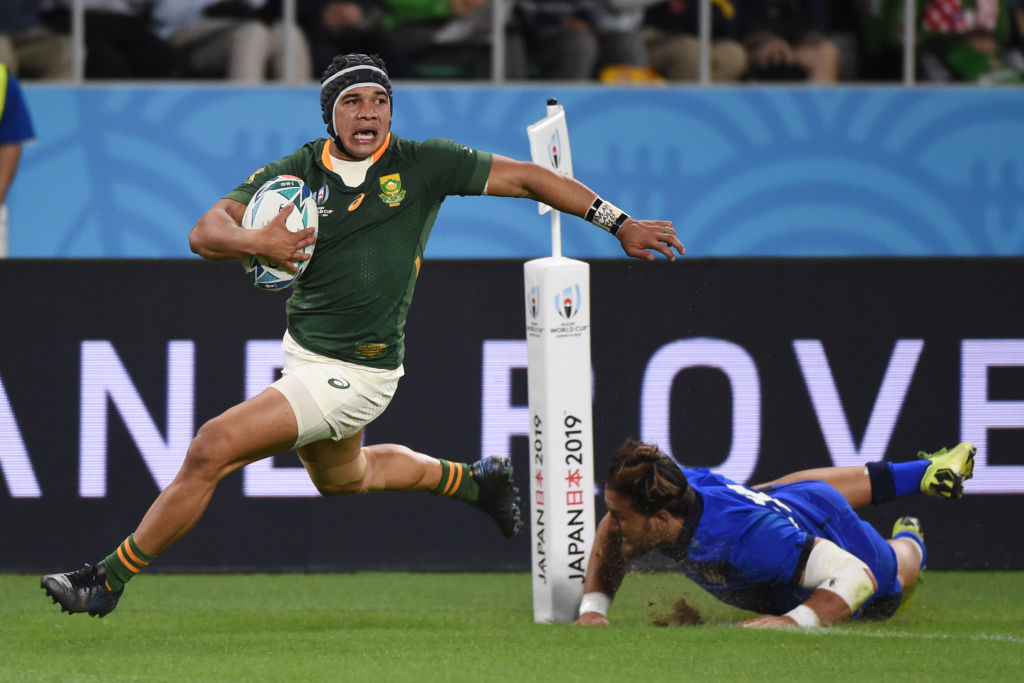 "I would say that Cheslin Kolbe is probably the best player in the world at the moment," says Flannery. "He is unbelievable, man. I'm telling you, he was unplayable against Italy. Did you see his first try? He got the ball off a long pass and had a guy right in front of him. He stepped off his right foot to come in off the touchline and, as he was coming down, loaded his left foot and was back out again. So it was in, out, back in and he finished in the corner."

So, it was to Trimble's detriment, that he selected a Best XV that did not contain the Springbok winger:

END_OF_DOCUMENT_TOKEN_TO_BE_REPLACED

Murphy's selection had a few different calls but his front row shouts, a Fijian in the back row and bumping Pollard from his team all went in his favour.

There was a switch of wings for Kolbe but Flannery swayed in this team's favour as the South African speed demon simply had to be involved. Here is the Barry Murphy XV:


popular
Dana White livid with late stoppage on UFC 246 undercard
Conor McGregor makes surprise call-out after Cerrone destruction
Club footballer of the year steps up to win it for Corofin in the clutch
In defeat, Jerry Kelly dies with his boots on in coming of age final display
Shane Walsh provides one of the all-time great captain speeches as Tullaroan take a thriller
"If there's a stadium show happening in Europe, it's happening in Ireland"
Conor McGregor on his post-fight comments to Donald Cerrone
You may also like
4 days ago
Farrell names 5 new caps and Sexton captain in Six Nations squad
4 days ago
Baz & Andrew's House of Rugby - Munster on the ropes
4 days ago
Six Leinster players that could benefit from a provincial switch
5 days ago
Six uncapped players expected in Ireland's Six Nations squad
1 week ago
Max Deegan makes Six Nations statement as Leinster crush Lyon
1 week ago
"If McCloskey's gonna be in the mix, he's gotta be in the mix now"
Next Page