"For most guys, that's way too much running."

The maddening beauty of intra-sports rivalry and 'we're better than you' arguments, is most people are entrenched on the matter. Rugby fans, for example, are often triggered when American football followers claim their sport has the toughest or most athletic players.

If that spat ever occurs again, though, rugby fans could simply point to the comments made by former Cleveland Browns and Kansas City Chiefs star Mitchell Schwartz.

END_OF_DOCUMENT_TOKEN_TO_BE_REPLACED

The 2018 All-Pro first team selection, and 2019 Super Bowl champion with the Chiefs was on The Ryen Russillo Podcast, this week, discussing the Dallas Cowboys NFL playoff defeat to the San Francisco 49ers. During their recap of the game, Schwartz mentioned he was roommates, in senior year, with Cowboys punter Bryan Anger at the University of California, in Berkley.

The Golden Bears football squad have not won a Bowl game in three years but Schwartz says the rugby team - also known as the Golden Bears - more than make up for the university's bragging rights. "They dominate," he says. "I think they've won 26 championships in 29 years. The rugby team has some ballers."

Indeed, the Golden Bears have won 28 national championships since 1980 and past players include US Eagles international players Blaine Scully, Louis Stanfill and record-capped Mike MacDonald.

"When we were renovating our stadium," Schwartz recalled, "we basically took over their rugby field and converted it into a turf football practice field. And, of course, the rugby team are sitting there thinking, 'These guys... we're way better than them!'

"We built all these bungalows up there and had meetings, and completely took over their field. They were pissed at us. We like their championships - they add to the school."

END_OF_DOCUMENT_TOKEN_TO_BE_REPLACED

"In part of the cost-cutting measures, they were talking about cutting rugby, at some point," Schwartz added. "And, again, they were like, 'We are the BEST team at this school. Why are you trying to get rid of us?!'"

Schwartz, who was a main part of the offensive line that ran with star quarterback Patrick Mahomes, on the way to two AFC titles and that 2019 Super Bowl, was happy to admit rugby players are tougher and more athletic than many in American football. 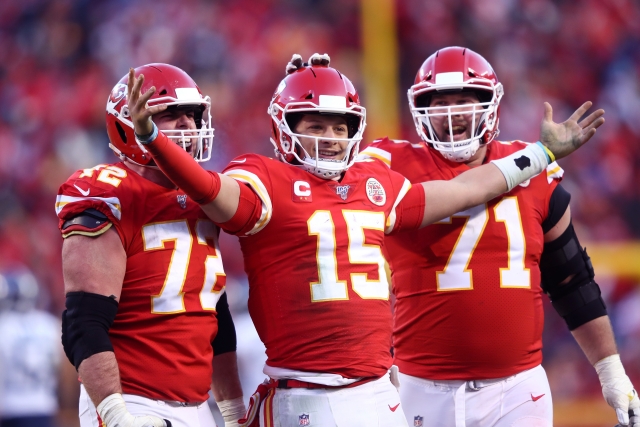 Patrick Mahomes #15 of the Kansas City Chiefs reacts with teammates Eric Fisher #72 and Mitchell Schwartz #71 after a fourth quarter touchdown pass against the Tennessee Titans in January 2020. (Photo by Jamie Squire/Getty Images) 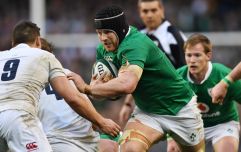 END_OF_DOCUMENT_TOKEN_TO_BE_REPLACED

During his eight years in the NFL [he is currently a free agent], Schwartz once started over 120 consecutive games, and had 7,894 consecutive snaps - putting him into the league's 'iron man' category for snaps.

He has a reputation as a fierce competitors, but still believes rugby players hold that overall edge due to their all-round athletic abilities. He commented:

"The thing with the rugby guys is, they are way more athletic than offensive linemen, because they have to run.

"Sure, Haloti Ngata [Super Bowl champion with the Baltimore Ravens] used to play rugby and Jordan Mailata, who is left tackle for the Philadelphia Eagles. He's a rugby guy.

"Every now and then you get the guy who is this 6-foot-5, 300-pounder that just steamrolls people. But, for most guys, that's way too much running. I'd be happy with my two- or three-yard maximum sprint window.

"They are also just nuts. They have that hockey player mentality, more so than football. On the whole, they're probably that bit more tougher and crazier than football players."

There we have one of the most combative offensive linesmen of the past NFL decade freely admitting that rugby players have that something extra special.

Use it as a trump card in the future, rugby fans, but do not expect the arguments to stop.


popular
Rangers legend says he and Roy Keane didn't speak during Man United spell
Man jailed for headbutting Sheffield United captain Billy Sharp
The coolest customer in hand-ball hoping to carry on the family tradition for Kilkenny
Chris Sutton praises and throws subtle dig at Rangers after Europa League final loss
"Certainly not a position that I'd like to be in" - Rory McIlroy on Greg Norman controversy
Rhodri Giggs accuses Gary Neville of hypocrisy over Salford sacking
FootballJOE's Career Path Quiz: #6
You may also like
2 days ago
Owen Farrell, Manu Tuilagi and 10 uncapped players in latest England squad
3 days ago
French media rave about Caelan Doris and 'Playstation rugby' from Leinster
3 days ago
Ronan O'Gara's La Rochelle stand in Leinster's way after semi-final grind
3 days ago
Somehow, we all may have underestimated Johnny Sexton
1 week ago
"He could be one of the world's best" - Sean O'Brien on rugby's latest speed demon
1 week ago
Picking the best sporting moment of the past decade is not simple
Next Page