Leinster fly-half Ross Byrne has been selected to start against England for this weekend's Rugby World Cup warm-up match at Twickenham.

The match will mark Byrne's first start for Ireland after he made his debut against Italy last year and Ireland head coach Joe Schmidt has recalled a host of first-team regulars for what should be a tough test against a full-strength England side.

Byrne will benefit from being surrounded by a wealth of international experience against England but he will have to make a strong start with Connacht fly-half Jack Carty nipping at his heels off the bench.

Reigning World Player of the Year Johnny Sexton and Munster fly-half Joey Carbery are virtual certainties to make the team barring serious injury which leaves one spot left at fly-half between Carty and Byrne.

Carty got the nod over the Leinster pivot during the Six Nations but Byrne reportedly has impressed during Ireland's training camp in Portugal this week and now has a chance against a top tier side to show what he can offer at international level.

With Sexton and Carbery harnessing such a strong grip of the Irish number 10 jersey over the last year, England represents a rare opportunity for some new faces to step into the middle and make an impression.

Here's what we can expect from Carty and Byrne.

He led the PRO14 in points scored with 157 in just 23 games. He was also fourth in try assists with 10, second in conversions made and fifth in penalties converted.

Carty has worked hard at improving his goal kicking over the last few seasons and finished the season near an 80% success rate but the big strengths of his game is his instinctiveness, his support running and his ability to attack the line.

We'll start with his off the cuff play.

END_OF_DOCUMENT_TOKEN_TO_BE_REPLACED

Carty can very much steer a team around the park but he also backs himself frequently to try things and see if they can come off.

Schmidt admitted that Ross Byrne is more similar to Sexton than Ireland's other options at fly-half but Carty gives the Irish coaching staff another alternative and may not be a bad choice to have if Ireland find themselves needing a spark off the bench.

Again we can see here against Cardiff that Carty can recognise space but i this instance, rather than just take the contact or try beat the defender with a step, he instinctively regathers his own kick and crosses the line to score.

The other area where Carty excels is his support play. There's a great example of the outhalf setting up a support runner against Gloucester last year where he plays an inside ball to the ball carrier before staying with him, receiving the ball back and then crossing to score, but the best example of his support was against Munster at the Showgrounds.

Connacht are trailing 31-17 with less than 10 minutes to play. They have the ball but have not crossed the halfway line and all of a sudden there's a half break from Paul Boyle who holds the ball up just long enough to find Carty who sprints to get to him. 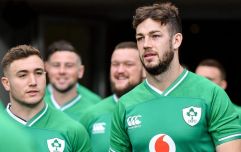 END_OF_DOCUMENT_TOKEN_TO_BE_REPLACED

This is the type of play that should jump out to selectors. Whatever about Carty's instinctiveness, his goalkicking, his passing etc., you want players that will make this type of effort to get on the end of plays when the team absolutely needs someone to produce.

Byrne is a much more conventional fly-half. He has impressed for Leinster during the PRO14 and when he's been called upon in the big Champions Cup games against Ulster and Toulouse.

He played 1131 minutes last season for the Blues and fulfilled the role of Sexton's primary backup but stepped up massively in his two biggest games in the Champions Cup.

Against Ulster he played 73 minutes and scored 16 points to book a spot in the semi-final and against Toulouse he put on a clinic in fly-half play as illustrated by former Leinster coach Matt Williams.

Ross Byrne impressed today on what was a massive opportunity for the 23-year-old.

"His attacking game has really moved on," said Horgan on Virgin Media Television.

"He takes the ball much more to the line that he had done in previous seasons and playing as a 10 you have to learn your craft. I think he'll definitely be helped by Felipe Contepomi coming in this year and he's much more upfield.

"One of the criticisms I've had of him in years goneby was that he was much more downfield and he was very easy to read when he was passing the ball but now you can see in those clips that his shoulders are upfield, that he's posing a threat and delivering the ball as well.

"That's the hallmark of a good 10; he takes no space on the inside, he stops the opposition from pushing out off him and he delivers the ball to the hands of the men outside him. It seems simple but it's the hallmark of good 10 play."

Ireland expected to make only one change for Triple Crown decider

END_OF_DOCUMENT_TOKEN_TO_BE_REPLACED

The clip above also shows a perfect cross kick towards Adam Byrne in the Toulouse game and it's probably a skill where Byrne is unrivaled in the country.

He frequently finds players on the wings and if his team is going forward and building pressure and sucking the opposition in, he has the accuracy to pull off kicks and create tries.

Stuart McCloskey dives over for Ireland's fifth try after a terrific cross-kick from Ross Byrne pic.twitter.com/HXYtbVCWmD

Schmidt now has an interesting choice to make between Byrne and Carty.

On one hand Byrne is a more of a Sexton prototype and realistically either player will serve as the third-choice fly-half so maybe you want someone that is more like your first-choice, especially if your backup fly-half in Joey Carbery is currently injured.

However, Carty provides that sort of spark off the bench and can create tries by himself which Ireland haven't always been able to do if they've fallen behind in games.

Ireland are in a good place with either option but this week's test against England could be the deciding factor between who watches the World Cup from their couch and who watches it from the bench, and potentially, maybe even the pitch.


popular
Carragher pushes all the right buttons and Keane delivers in gold
Conor McGregor's next fight narrowed down to two options
Jermaine Jenas' reaction to Eamon Dunphy punditry is absolutely hilarious
"At the end of it, you're just saying, 'thank God I didn't block that ball down'"
The Tony Kelly show in the storm as forgotten man Shanagher shows his worth
Tyson Fury's official purse for Deontay Wilder fight revealed
Ben Askren on getting the opportunity of a life-time... after he retired
You may also like
5 days ago
These three men have proved a point but are far from done
6 days ago
"CJ Stander, for all his praise, could have got carded a lot earlier that that"
6 days ago
Keith Earls and the role that could prolong his Ireland career
1 week ago
"I'm going with my gut here and feel it's the right thing to do" - Andrew Conway
1 week ago
Baz & Andrew's House of Rugby - Triple Crown showdown
1 week ago
"It was a big game-shifter" - Alun Wyn Jones laments Wales' missed opportunity
Next Page