Of all the senior Ireland internationals coming to the end of their current contracts, Rory Best would appear to be the safest bet to sign on with the least amount of fuss.

An international standard hooker, who is damn handy around the breakdown and has a knack of sweet-talking referees around to his way of thinking, could fetch himself a tidy salary in England or France but Best is hell-bent on making the 2019 World Cup. That doesn't mean he will stand for being short-changed by the IRFU but he will be sticking around.

That is more good news for Ulster fans after Kieran Treadwell, Luke Marshall and Rob Herring have all signed up with the province until 2021. At the top of the wish-list for Ulster fans [and it is a long one] would be Best and Iain Henderson signing new deals, Jared Payne getting back on the pitch and getting in a decent No.10 when Christian Lealiifano leaves.

Best spoke to The Hard Yards recently and made all sorts of sense when talking about his time with Ulster, Ireland, the Lions and about leaving a legacy once he hangs up his boots.

END_OF_DOCUMENT_TOKEN_TO_BE_REPLACED

Best is 35 now and will be 37 by the time the next World Cup is in the books. Having played in 2007, 2011 and 2015, it would be his fourth tournament and it grates that Ireland have never been beyond the quarter finals.

At the beginning of the season, Joe Schmidt told Best he wanted him to captain Ireland for the season. Ever the realist, Best accepted the honour but told his coach he would understand if another conversation, or decision, was required after the Guinness Series. It was not as Best was as good as ever. He will be Ireland's Six Nations captain in 2018, his third time to led the team into a championship campaign.

END_OF_DOCUMENT_TOKEN_TO_BE_REPLACED

He is at the stage in his career where he is also thinking about the next step or, as many rugby players jokingly refer to it, the afterlife. His background is in farming and he still keeps his hand in but he does not expect a clean break from rugby.

"If you come from a farming background, it is the way you want to bring your kids up," he says.

"With our family farm, we already have my dad. He's supporting my mum and my sister a bit, even though she has a job. My brother is there too and he has a wife and three kids to support.

"If I came back now to 100% farm, it wouldn't work. We couldn't sustain three families.

"It's something that, if money didn't come into it and it was an ideal world, 100% I would just go back and farm, and enjoy doing it. Unfortunately, we're all grown ups now and money does come into it. You have to make sure that you bridge that gap from the income you have now to the future income.

"Whether it is farming the way I am at the minute, which is very much a part-time fashion or whether it is, for want of a better word, getting a real job. Or you could go back and farm full-time and trying to do as much work as you can, rugby related. It is something I am giving consideration to but, as much as I love doing it, farming is going to have to remain something I do as a bit of a part-time or hobby for me." 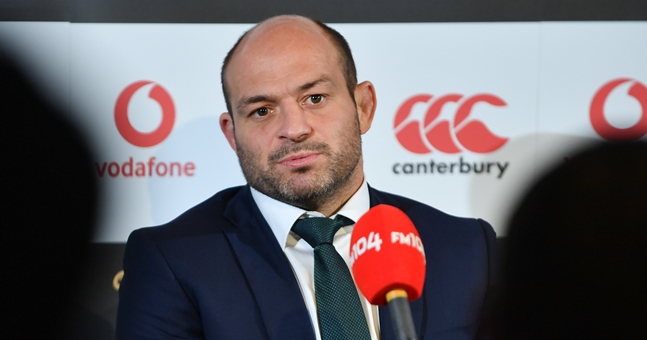 Best says he is not sure if he is enthralled with the idea of 'pulling on a tracksuit' every day and coaching but he does enjoy that side of the game.

"I do a little bit of coaching with Banbridge and I enjoy it. They are in 1B [Ulster Bank League]. I do that every Tuesday night and I love it. It's just a real different look to rugby, as opposed to professional rugby.

"The thought of doing that every day, I'm not sure if I want to do that. But having given so much from rugby, it's not something I necessarily want to walk away from either. Hopefully I've still got a little more I can give to rugby as a player but I'm doing those bits of coaching and media work along the way, that I can get, and just see what I enjoy doing so I'm not rushed into making a decision [when I retire]."

Asked to expand on this joy he gleans from being involved in amateur rugby, Best comments:

"There are a few of them there that I would have played underage with but most of the rest of them would have been a couple of years behind me. I would have known them from being at the club a little bit, over the years. But just hearing the craic that they have, and the slagging... it doesn't really matter who you are, if you go down there you get slagged.

"And stuff like, they were out after one of their games and one of the guys got a little worse for wear. They stole his keys, took the car and brought it up to the very back pitch and parked it underneath the posts. Things like that and things you just wouldn't do at the Kingspan Stadium!

"For me, it just gives me a fresh look at things, and all the good work being done at the club and the sacrifices people are making."

After all Best has seen and done, for Ulster, Ireland and the Lions, one really gets a sense of how much he relishes dipping back into the amateur club where his journey to the top began.