"I remember this tall, lanky guy coming in... standing in the corner, throwing the ball to himself"

"I think you'll all agree, Robert Baloucoune was unbelievable."

Early last week, Robert Baloucoune would have read the training tea leaves and come to terms with missing out on his Six Nations bow.

The Ulster winger has been in fine form since he returned to the provincial fold, and some impressive Champions Cup performances had some tipping him for Ireland minutes in the Six Nations. When James Lowe was confirmed as an injury absentee, for the opening rounds at least, Baloucoune looked well placed, especially as he had started the November win over Argentina.

END_OF_DOCUMENT_TOKEN_TO_BE_REPLACED

As it transpired, Mack Hansen got the No.11 jersey and would go on to win man-of-the-match on his Test debut. The night before, Baloucoune did all he could to keep his name in the conversation with a two-try salvo in an Ulster win over Connacht.

On the latest House of Rugby [LISTEN from 26:45 below], former Leinster and Ireland star Denis Hickie and Greg O'Shea, who played Sevens with Baloucone, discussed the rise of the 24-year-old flyer. 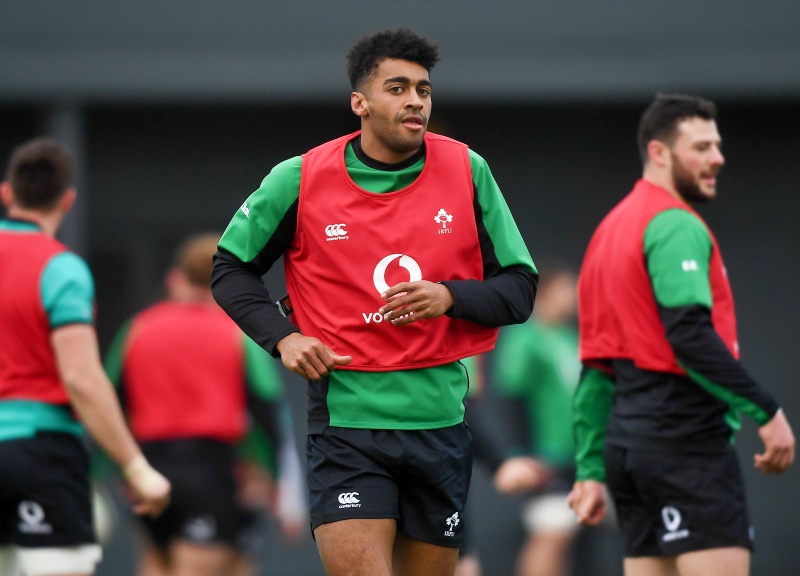 'He just took off' - O'Shea on Robert Baloucoune

Baloucoune's father hails from Senegal, but he was born and raised in Enniskillen, Fermanagh. He turned heads in schools and club rugby, and his first taste on Ireland action was with the Sevens set-up. It was there that he crossed paths with Greg O'Shea.

"Years ago, I remember this tall, lanky guy coming in," says O'Shea.

"He was from up the North. I recall him standing in the corner and throwing the ball to himself. He didn't really get involved. And, to be honest, his skills were really bad when he first came in.

"And then he just took off! He really just tuned in and became one of the best players within the season.

"And now look at him - he's probably going to feature in the Six Nations."

Denis Hickie, who played 62 Tests for Ireland and the Lions, is a big fan of Baloucoune and has been following his progress closely over recent seasons.

"He's very much a sprinter, and he has that physique of a sprinter. At the start, I may not have seen enough of him but I wasn't sure if he was going to be able to make the step-up towards the national side. He missed a bit of rugby last year but, this season, he has come back and put on a bit of size.

"Everyone talks about his pace and that try [above] was incredible - a 50-metre sprint. Great wheels and incredible, raw pace.

"If you're at the highest level and have players that can finish like that, you're going to win your games. But, to be fair to Robert Baloucoune, what he has done in the other parts of his game has probably impressed me most. It is probably epitomised most from that Northampton game, away. He fought really hard for that first try. There was a lot of cover there, but he showed a lot of power to get over for that first try.

"In the second half, for Michael Lowry's try, he was able to get in between defenders and offload. These aspects of the game - he has worked on his strength and skills - mean he'll be there or thereabouts for an Ireland run, this season."

To Hickie, Andy Farrell's fortune, right now, is Baloucoune's misfortune. James Lowe was looking set for a long stint on the left wing until injury hit, now Mack Hansen is the man in firm possession.

All Baloucoune can do is keep up the good form, in training and Ulster matches. When his chance comes, he must be primed to take it.