"He grabbed his opportunity and never looked back."

World Player of the Season for Antoine Dupont, in our House of Rugby awards, but Robbie Henshaw and Tadhg Beirne may yet mix it with the France scrumhalf for the World Rugby accolade if they continue their good form on British & Irish Lions duty.

With the domestic season wrapping up (some of the Irish provinces may have only one game left), and the PRO14 and European competitions complete, we felt it was appropriate to start handing out some player awards.

END_OF_DOCUMENT_TOKEN_TO_BE_REPLACED

On the latest House of Rugby episode [LISTEN from 1:00:30 below], Eimear Considine, Fergus McFadden and Ian Madigan discussed their picks for Best Player (provincial and Test level), Unsung Hero, Best Women's Player and the young gun that has most impressed. 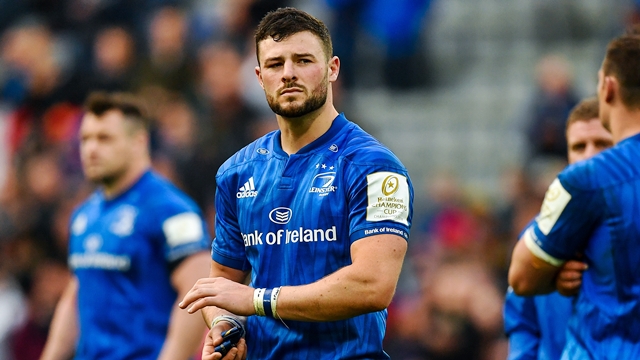 Robbie Henshaw has produced the goods, in both the 12 and 13 jerseys, this season. (Photo by Brendan Moran/Sportsfile)

END_OF_DOCUMENT_TOKEN_TO_BE_REPLACED

Although we still have the destination of The Rainbow Cup to decide, the rejigged end-of-season competition has a very relaxed feel to it. Some clubs have opted to blood new players while others, such as Benetton and Munster are keenly contesting it.

The big trophies have already been decided for the Irish provinces, though, so it seemed apt to hand out some player awards. The first ones up were 'Best Player' at Test and provincial levels.

"I think Robbie Henshaw for both," said Madigan.

"For Leinster and Ireland, he's had a great year and I'm very excited to see what he can do on this Lions tour. He's at the very peak of his career and this tour has come at the right time for him. It would be very hard to argue against him."

Asked for his take, Fergus McFadden agreed that Henshaw was right up there, along with a Munster forward. With the deciding vote, he split the awards.

"Robbie and Tadhg Beirne," he commented. "At Test level, Tadhg Beirne. His journey from going on the Lions tour to where he was before the Six Nations, people didn't think he would be starting for Ireland but he literally grabbed his opportunity when there were injuries, and he never looked back."

END_OF_DOCUMENT_TOKEN_TO_BE_REPLACED

McFadden also praised Jack Conan for making a great run of it from early 2021 on, and getting richly rewarded with a Lions call-up. When it came to Underrated Player of the Year, that went to Ulster's Nick Timoney, who McFadden tipped as a possible Ireland debutant in their summer Tests against USA and Japan.


popular
Liverpool set £60m Mo Salah price as contract talks continue
Glass half full as Derry's positive play produces five fantastic goals to reach All-Ireland semis
QUIZ: How many of the 10 most successful football counties can you name without making a mistake?
Patrick Vieira claims he was 'much better' than Roy Keane in new interview
Matt Le Tissier says he asked Sky Sports why they never sacked Jamie Carragher
Éamonn Fitzmaurice explains Aidan O'Shea's best position and how it can be used against Kerry
"All of a sudden he had me midfield with Niall Scully. We played Na Fianna and I was chasing after Eoin Murchan."
You may also like
4 days ago
Stormers' Hacjivah Dayimani still celebrating URC triumph in full kit, four days later
4 days ago
"Brave" Harry Byrne backed to lay down World Cup marker in New Zealand
5 days ago
"It's pathetic!" - Romain Ntamack defended after changing room footage criticised
5 days ago
"I just remember the room erupting!" - Nick McCarthy on coming out to his Leinster teammates
5 days ago
Danny Care and Billy Vunipola make 36-man England squad for Australia
1 week ago
"I was never supposed to be here" - Emotional Ellis Genge reflects on Leicester's league triumph
Next Page