Rob Kearney got a congratulatory tweet, and phone call, from the Vice President of the United States after Ireland beat the All Blacks. That actually happened.

The Leinster fullback had one of the games of his rugby life at Soldier Field and helped Ireland snap their 111-year losing streak.

In an interview with TV3's Ireland AM, this morning, Kearney spoke about that 40-29 win, his recent concussions and his relationship with Vice President Joe Biden. 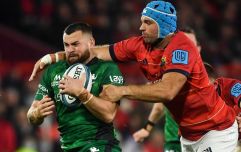 END_OF_DOCUMENT_TOKEN_TO_BE_REPLACED

"We played New Zealand back in 2013 and we were so close to them," he said. "That gave us a bit of confidence and we were building towards that game in Chicago for so long.

"Things just clicked for us on the day. They didn't have their best game and we did. That's the great thing about sport and we've banished that thing of never beating them before.

"The atmosphere was incredible. There must have been 40,000-50,000 Irish people in Chicago. The Chicago Cubs had just won the World Series for the first time in 108 years so the city was going ballistic."

Of course, Alan Hughes was not letting Kearney get away with his Chicago recollections without mentioning 'The Veep'. Kearney explained:

"It started off as quite loose and a weird connection and then Joe came to Ireland on a state visit and myself a Dave met him and then he invited the two of us over to The White House. We went over in the summer and met him there, and the relationship has gone from strength to strength.

"It was pretty cool. I spoke to him after the game and he had watched it. He's actually a pretty big rugby fan."

What a legend. We knew Biden should have taken a run at The White House. 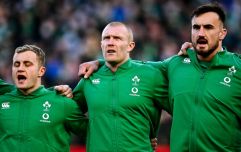 END_OF_DOCUMENT_TOKEN_TO_BE_REPLACED

Kearney featured in the return game against the All Blacks, on November 19, and the 27-24 win over Australia but he sustained blows to the head in both fixtures.

He is set to miss this weekend's Guinness PRO12 action but he hopes to be back in time for the Champions Cup. He said:

"Everything is fine. I picked up a bang in the head and went off for the HIA. But I had also picked up a bang to my head in the second All Blacks game so I think the medics made the decision that it was wiser not to let me back on. In the age of head collisions, now, you can never be too careful.

"You're really disappointed that you couldn't finish out the game but, at the same time, it could be a hell of a lot worse. Hopefully I'll only be out for a week or two."

Biden will be keeping tabs, we're sure.