RG Snyman posted that stoic message on his Instagram Stories, on Monday, accompanying a post from Munster that confirmed he had once again ruptured his cruciate ligament.

The Springbok second row was out for nine months, last season, after injuring the same knee on his Munster debut against Leinster. That fixture was part of a delayed 2019/20 campaign so Snyman missed out entirely on Munster's 2020/21.

END_OF_DOCUMENT_TOKEN_TO_BE_REPLACED

When he did get back on the training pitch and start taking contact again, this summer, he suffered burns in a BBQ pit fire accident and needed skin grafts. He missed out on the British & Irish Lions Tour to South Africa and did not feature for the Boks in The Rugby Championship.

Snyman has, thus far, only played 54 minutes for Munster since arriving in 2020, along with compatriot Damian De Allende. However, his two previous substitute appearances this season - against the Sharks and Stormers - gave Munster fans a real taste of how good he could be in Johann van Graan's team.

The 6-foot-9 lock lasted just nine minutes, as a sub against Scarlets, on Sunday and ruptured his ACL after claiming a restart. He may well be facing the prospect of another seven to nine months out of action.

On the latest House of Rugby URC episode [LISTEN from 39:15 below], hosts Greg O'Shea, Megan Williams and Jason Hennessy gave their live reaction when learning of the extent of Snyman's injury. There were also thoughtful and supportive comments made from a Leinster player and coach. 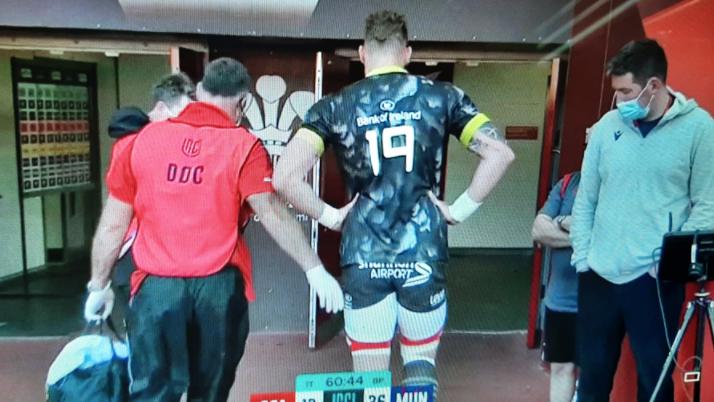 "Ah no," Greg O'Shea exclaimed as news came through of Snyman's "significant injury".

END_OF_DOCUMENT_TOKEN_TO_BE_REPLACED

"The guy just can't catch a break... he's an incredible player. Hopefully it is not as bad this time."

O'Shea had his fair share of injury troubles - including a lacerated Achilles tendon - when he was with Munster, so he can certainly emphatise with the big South African lock.

Leinster flanker Will Connors had been a guest on House of Rugby URC and had just finished his part of the show, during which he had spoken of how great it was to see Leinster winger Adam Byrne back after two years of injury hell.

As he was getting his microphone taken off, and was talking about how he hoped to be back playing in the next six to seven weeks, Connors was informed of Snyman's injury.

END_OF_DOCUMENT_TOKEN_TO_BE_REPLACED

Having missed the end of last season, and the summer Tests, with a knee injury, the Leinster flanker will know how tough the road ahead is for Snyman. He spoke of how he had been following his comeback closely, over the past couple of weeks, and how it had heartened him to see Snyman was looking back to his best.

Another Leinster voice shared some thoughts on Snyman, on Monday. Leinster backs coach Felipe Contepomi was asked about the lock's latest set-back during a Monday press briefing.

"I feel sorry for him, it's one of those things that is the bad side of sport, injuries, coming back from one injury to another similar one, it’s hard," Contepomi told RTÉ.

"The biggest thing is when you have a long-term injury is looking after yourself even more than when you are fit. The more you look after yourself the quicker and better you will comeback. Injuries can form your personality and character. It's a setback but I’m pretty sure he’s already looking forward, saying I’ll come stronger and better, and that’s a mentality champions have."

Most in the game here, no matter their provincial leanings, had been enthused by Snyman's cameos off the Munster bench.

All will be pulling for the big guy as he sets off on the comeback trail.


popular
Paul Scholes calls a spade a spade after comeback win
It's often forgotten that Tommy Walsh began his career with the same stardom and promise as David Clifford
Derry club win county final factfile games with extravagant set of jobs
Jordan Larmour primed for a season to remind everyone how good he is
Shane Walsh: 'That's not how I was coached to play football. No one was coached to play football that way'
Paul Scholes says Paul Pogba is a "daydreamer" and Fred and McTominay are "limited footballers"
"Where Johnny Sexton is so important to us now is being able to pass the baton"
You may also like
1 week ago
Munster confirm RG Snyman has re-ruptured his cruciate ligament
1 week ago
Worrying scenes for Munster as RG Snyman lasts only nine minutes against Scarlets
2 weeks ago
Gavin Coombes and the fascinating tug-of-war for Ireland's No.8 jersey
2 weeks ago
Peter O'Mahony's try-saving actions cannot be understated or undersold
2 weeks ago
Peter O'Mahony rages over "full-on bite" as Munster secure comeback win
3 weeks ago
"We need players like him" - Joey Carbery and the weight of expectation
Next Page