Ever since Josh van der Flier and Dan Leavy first broke into the Ireland squad it's been a three-horse race for the green number seven jersey.

Sean O'Brien has been one of Joe Schmidt's favourites over the years, coming back from numerous injuries to put in match winning performances, but that may all be over now.

Leinster confirmed on Sunday that O'Brien has suffered a hip injury that will rule him out for the next six months and it's effectively brought the curtain down on his Ireland career with the two-time British & Irish Lion set to join London Irish next summer.

His absence, along with Dan Leavy's season ending knee injury, has effectively given Josh van der Flier a free ride into the Irish starting XV with his man of the match performance against Munster in the PRO14 semi-final serving as a swift reminder that his own injury troubles are now behind him.

Van der Flier has been excellent for Ireland when he has been available and he now has a real chance to stake a claim with both Leinster and Ireland with O'Brien's departure and Leavy's injury altering the landscape at club and country.

It's a loaded field but who now comes into the Ireland squad with O'Brien and Leavy off the plane? Who takes their seats?

Chris Henry and O'Brien were the primary openside flankers while Murphy and O'Mahony had both played in the position before so Ireland were prepared for different scenarios, which, were invariably thrown at them when O'Mahony and O'Brien were ruled out of the quarter-final with Argentina.

Three of those players - O'Brien, Henry and Heaslip - will play no part in Japan later this year but Ruddock, Murphy and O'Mahony almost certainly will. 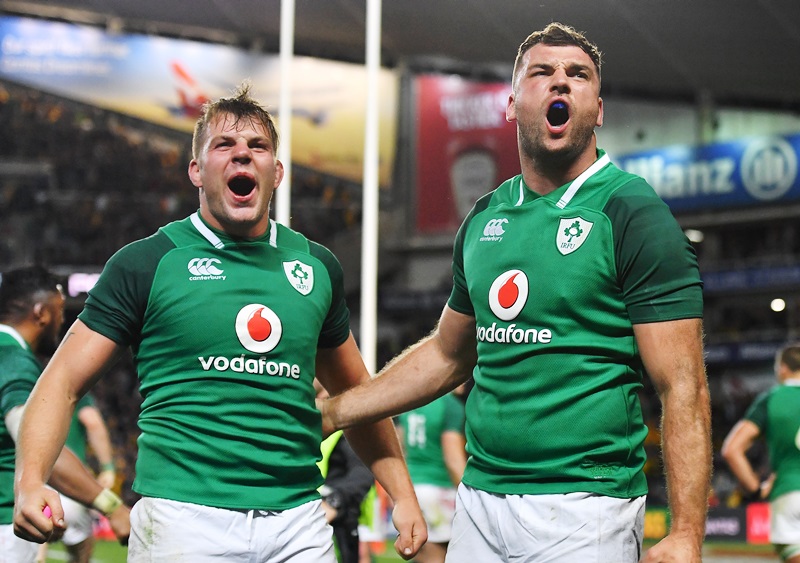 END_OF_DOCUMENT_TOKEN_TO_BE_REPLACED

Throw in van der Flier and CJ Stander and Ireland already have five players with Jack Conan all but wrapping up the sixth spot with his brilliant performances for Leinster complimenting his Six Nations appearances earlier this year.

O'Mahony has filled in at openside flanker at various points in his career and could be called upon with Stander able to shift over to blindside and Conan then able to slot in at the back of the scrum.

Van der Flier is a natural seven and will most likely start the meaningful games in Japan while Murphy has played most of the season at openside for Ulster and has probably now earned himself at least a spot on the bench given his versatility across the back-row.

Murphy's versatility has been an asset throughout his career but he feels like it's also hampered him with certain coaches and he wanted to move to Ulster last year to increase his chances of selection with Ireland.

"I've been playing seven this season for Ulster and that was one of the things that when I was coming up, obviously I love the fact that I've been able to play 6,7 and 8 and it's gotten me into a lot of places in the past with some coaches that have liked the versatility, but sometimes I feel like that may have harmed me when it came down to 50/50 decisions and they picked someone who played more consistently in the one position," said Murphy.

"It's been great that I've been able to play that seven position and it's great that Dan [McFarland] has put me there week in and week out and it's been a really exciting year and we just want to build on it again and again.

"I suppose [with openside] it's being able to get to the breakdown straight away. Six is quite line-out dominated and your holding the edge a lot. I do that role quite a bit from line-outs already at seven. It's kind of hard to put a finger on it but there is definitely a difference. From a seven's role you're probably closer to the action and with eight there's a bit more ball carrying, I just like getting into the thick of things, the not so nice part of it, the rucking and everything, I just like it."


popular
QUIZ: Name the last clubs these footballers played for before joining Manchester United
SportsJOE 2000s Football Quiz | Round 1
QUIZ: Name the footballers to have played for Manchester United & Real Madrid
QUIZ: Name these footballers based on their former teammates
The SportsJOE 12 o'clock quiz | Day 67
The SportsJOE 12 o'clock quiz | Day 68
"I went up to the hotel, got attacked in the room and told I'm no longer Tipperary captain"
You may also like
3 days ago
'We knew how much it meant to them' - Conrad Smith on Croke Park history lesson
3 days ago
"I was like, 'Your ribs will be broke, alright, if I get my hands on you again!'"
4 days ago
Baz & Andrew's House of Rugby - Mike Brown on past battles with Ireland
4 days ago
Online media excluded from another important IRFU briefing
5 days ago
"Just to clarify, it was an accident" - Mike Brown on Conor Murray incident
1 week ago
QUIZ: Guess the footballer from their Wikipedia page | Irish edition
Next Page