The day when BOD went global.

Having made his debut in Australia the previous summer and played at the World Cup, Brian O'Driscoll was already well known on these shores when he scored that famous hat-trick in Paris.

But for the rugby press in the United Kingdom, the 21-year-old centre's tour de force at the Stade de France 16 years ago was a revelation.

Oh how we would love an Irish player to elicit reactions like this with their performance in Paris this afternoon.

A Premiership target in the Daily Telegraph

"O'Driscoll tackled with southern hemisphere ferocity, passed with the dexterity of a Jo Maso and sprinted with the power of Tim Horan.

"O'Driscoll was Ireland's rallying point of excellence. Whenever they needed something extra special he obliged. Only extraordinary talents can, seemingly at will, aspire to alter the course of international matches in such a fashion and, in less than 12 months, it would seem O'Driscoll has joined that category. And he is only 22.

"Hailed as the messiah of Irish rugby by supporters and press after breaking into the Ireland squad last summer and quickly nicknamed 'God', the Blackrock College player is being heavily courted by London Irish. That is a fight Dick Best, the club's director of rugby, may lose. On this form, there is not a club in the Premiership who can afford him."

The supreme tormenter on BBC

"It was a supreme performance from O'Driscoll, who has been widely tipped as one of Irish rugby's most exciting prospects.

"He tormented his hosts all afternoon and combined well with Henderson to break through the French defence at almost every opportunity." 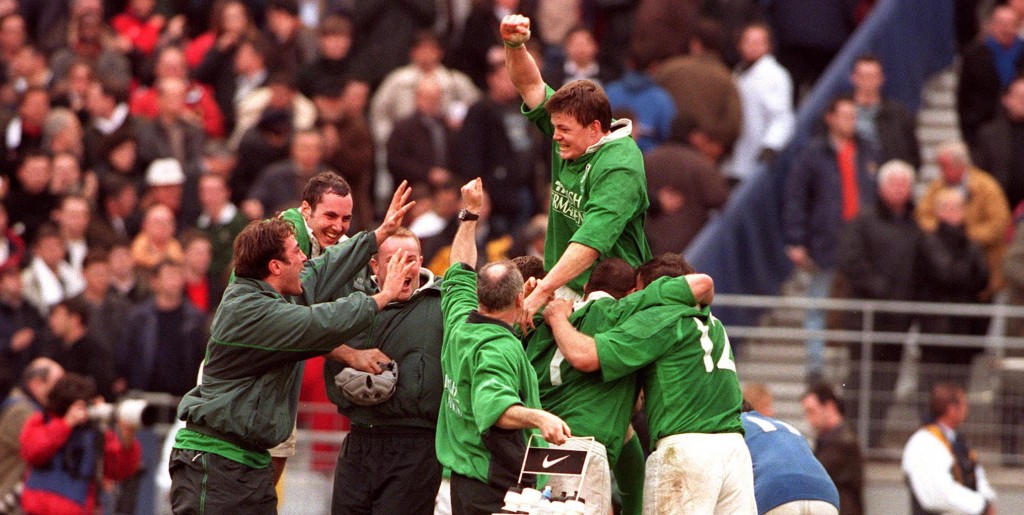 The speedy centre on ESPN

"But the Irish refused to lose heart. France led 19-7 and looked to be home and dry when the speedy Irish centre O'Driscoll running on to a perfectly timed pass by Rob Henderson bamboozled his way through the first defensive line and strolled under the posts for his second try."


popular
Andy Moran reveals which former Mayo teammate was the ultimate team player
Paul Galvin is not one bit impressed with the new Kerry jersey
"It’s hard not to respect Johnny, even if you don’t like him!" - Dan Biggar
QUIZ: Which is the correct GAA crest?
Ireland Under-17 defender Cathal Heffernan 'in talks' with AC Milan
QUIZ: Name the 25 clubs relegated from the Premier League more than once
"I was in the Blackrock end goal looking up to the heavens saying, "Get us through it" - Kerins following his late father's footsteps
You may also like
2 days ago
Ireland fitness update offers even more reason for Six Nations optimism
3 days ago
"I have to come into this camp and do what I can to get the No.2 jersey" - Rob Herring
3 days ago
"It's not a stepping stone any more" - Connacht pride in Test-ready stars
4 days ago
"I had a point to prove" - Conor Oliver on choosing Connacht over Leicester Tigers
1 week ago
"I saw a skinny boy from Ireland, standing in a big goal" - Jurgen Klopp praises Caoimhín Kelleher's development as a goalkeeper
1 week ago
Predicting Ireland's starting XV for Wales after Andy Farrell squad announcement
Next Page