THE RASSIE EFFECT - Dressing room beers, physicality, adding layers and getting the best out of his star winger.

He was only at Munster 20 months but Rassie Erasmus had a profound effect on the place.

Jerry Flannery can still recall several of the senior Munster players approaching the South African, six months in, and urging him to pick them in the exhibition match against the New Zealand Maori. Erasmus had planned to put out a second string side but the senior stars not included in the Ireland squad were itching to front up against a touring side. It was a matter of pride, and tradition.

Around that time, Erasmus had to keep the province ticking over and as focused as the possibly could be when Anthony Foley, his senior coach, passed away, in Paris, on the day of a European Cup game against Racing 92.

The image of Erasmus' feet frantically twitching under the desk, during Munster's first press briefing after Foley's passing, sticks with me to this day. Erasmus and Peter O'Mahony, his captain, spoke remarkably well that day, in October 2016, and the players somehow went out, six days later, and beat Glasgow in an unforgettable European game at Thomond Park. Flannery recalls:

"Rassie said to us, before the game, 'Look, you buried your head coach today. Playing for Munster is a privilege; it's not a burden. You've had the hardest week you'll ever have in your lives. Go out and play'."

Go out and play.

That is the driving philosophy of Erasmus and it is what he tried to install in Munster, and again with South Africa.

Ahead of the Springboks' World Cup final against England, this weekend, Flannery and Andrew Trimble discussed 'The Rassie Effect' on the latest episode of Baz & Andrew's House of Rugby. 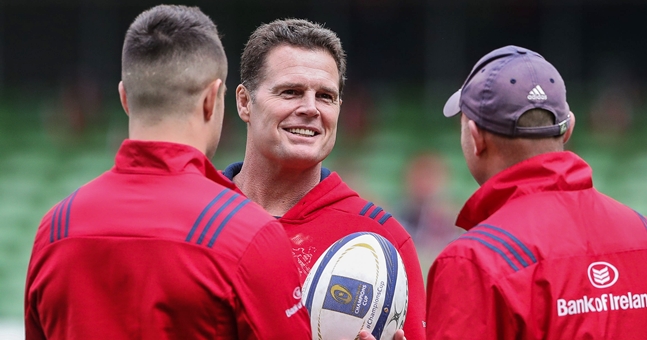 END_OF_DOCUMENT_TOKEN_TO_BE_REPLACED

"Rassie was great for Munster and great for me, personally," Flannery told House of Rugby earlier this season. "If Rassie called me in the morning and said, 'We need to get rid of a body', I'd say, 'Okay, let's go'."

Thankfully, for all involved, it never got to that stage, or anywhere close. Under Erasmus, Munster went from scraping into the Champions Cup to reaching the next season's semi-final (losing to eventual winners Saracens) and the Guinness PRO12 final. He left midway through the following season with the province well placed, again, in both competitions. Flannery told Trimble:

"Where England are now is where I would have predicted that, if things kept going well over the next few years, that's where Munster could go.

"Because Munster have a strong set-piece, traditionally. From when Rassie came in, we would have focused on those things. Strong set-piece, kicking game, aggressive D [defence], and then being competitive in attack. And then we started to add in layers over the years, then Rassie and Jacques [Nienaber] went back and Johann [Van Graan] came in. He would have had some different ideas around how we'd do certain things, and we'd add a little bit of unpredictability."

"Rassie was very good from the start," Flannery added, "in coming in and setting out expectations for everyone. He said, 'All I want you to do is get better every single day and, when you get out to play for those 80 minutes, I want you to absolutely empty the tank. Everything that you have to offer."

One thing that Erasmus, a former Springbok back-row, brought back to Munster was the idea of having a beer with teammates, and even the opposition, in the dressing room after a game.

"He brought the beer back into Munster as well.

"We were so paranoid that we weren't being professional enough and we weren't reaching certain standards. It'd be like, 'No drinking, no drinking'.

Many of those that watched South Africa's quarter- and semi-final wins over Japan and Wales would not hold out much hope for the Boks to provide much excitement in this Saturday's World Cup final. 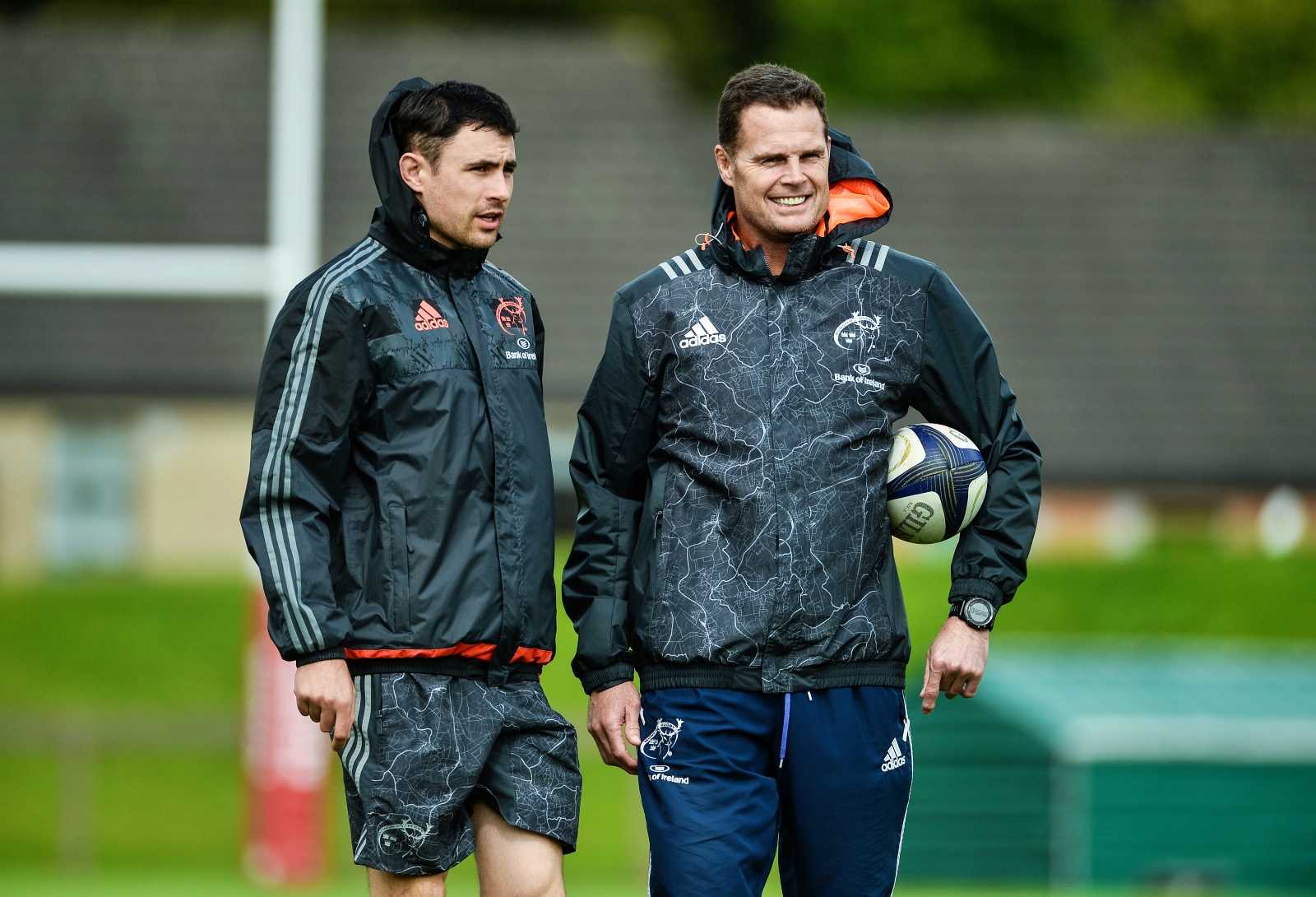 Felix Jones (left) was technical coach under Erasmus at Munster. Both are now with the Springboks. (Photo by Diarmuid Greene/Sportsfile)

Flannery says Erasmus does have a very structured way of playing while Trimble notes that players such as Cheslin Kolbe - expected to be fit to face England - and Simon Zebo have flourished under him.

FLANNERY: With the players, and all of the work they've done, when they go out in the World Cup final, you don't want them tied up in their own heads, feeling they can't make a mistake.

TRIMBLE: Yeah, it's freedom to express themselves. Freedom to go out and just play. A good example of that with Rassie, actually, is (Simon) Zebo because he's a massive Rassie fan. And it mightn't have been a game that would have suited someone like Zebo, because it was direct, it was confrontational, it was physical, and he was a guy who liked a bit of space and liked the ball in his hand. Maybe like (Cheslin) Kolbe, same sort of thing.

FLANNERY: You gotta think of it, with Zeebs, like Rassie would have said this to us. Would have said, like, because Rassie said, "Why does Zeebs play the game? He plays the game because he loves, like, the attention. He loves the spotlight of it, you know. He likes being an individual. That's why, when he scores a try, he throws up the 'Z'. That's what he loves and, if you take that away from him, he doesn't want to play the game. You can't tell him not to celebrate a score. When he gets up in the morning, he goes, 'I'm excited to go to training because I want to work on scoring some tries. That's his reason. And the team can accommodate that.

Kolbe, like Zebo, is magic uncorked when the ball comes his way, but both men fit into the team and work hard in all the other required aspects because it is that team that gives them the backing to play, and be themselves.

For Flannery, Erasmus has exceeded all South African expectations in winning a Rugby Championship and reaching a World Cup final this year. But try and tell a Springbok fan, or their coach, to settle for that.


popular
"If Murray is playing that first half for England, he's probably Man of the Match"
Jacob Stockdale and Johnny Sexton not spared by English press
Baz & Andrew's House Of Rugby - Twickenham carnage
Triple Crown wrenched away as England scrape Ireland off their boots
'Were they up for it more than us? That's my responsibility' - Andy Farrell
ROG hits the nail on the head assessing Ireland's performance
Tyson Fury reveals what happened when he sparred Anthony Joshua
You may also like
3 days ago
"Emotions will be charged" - Sean O'Brien backing Ireland for Triple Crown
4 days ago
Guinness Pro14 Preview: Ulster v Cheetahs
4 days ago
QUIZ: How well can you remember this season's Premier League results so far?
4 days ago
Guinness Pro14 Preview: Edinburgh v Connacht
5 days ago
Baz & Andrew's House of Rugby - Live in Dublin with Scott Fardy and Fiona Coghlan
1 week ago
Pro14 Preview: Munster v Southern Kings
Next Page