POLL: Help us decide the greatest Irish scrumhalf of the professional era

On August 26, 1995, rugby was declared 'open' after a unanimous vote from the International Rugby Football Board [now World Rugby] in Paris.

A game that was proudly amateur for over a century had, overnight, become professional. Ireland were slow on the uptake but eventually adapted to the pro game and are now the Northern Hemisphere's leading nation.

END_OF_DOCUMENT_TOKEN_TO_BE_REPLACED

We start with the scrumhalf position. Following an intensive, in-house debate, we have pared it down to three top-class options. Performances for the national team are the consideration, which means that players such as Eoin Reddan and Isaac Boss just missed out.

Vote in our poll [below] and let know who you want in the No 9 jersey.

END_OF_DOCUMENT_TOKEN_TO_BE_REPLACED

Made his name as a nippy, tenacious No.9 with Munster and was Ireland's go-to guy behind the scrum for a decade. Pass like tracer bullet, a dangerous sniper and infamous tap-tackler. Won three Triple Crowns and was in Ireland's 2009 Six Nations and Grand Slam-winning squad. 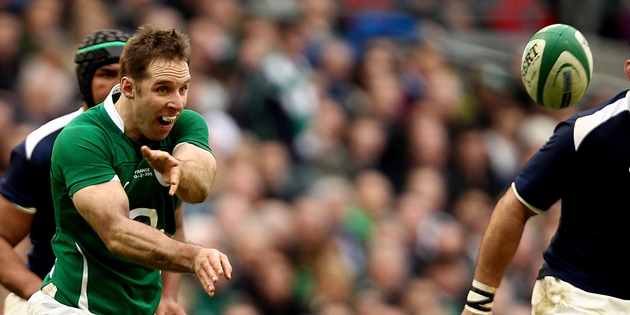 END_OF_DOCUMENT_TOKEN_TO_BE_REPLACED

The former Cork hurler's flame burned brightly yet briefly in Test rugby. 24 caps [19 starts] from 2007 to 2012 but will forever be known as the first-choice scrumhalf for Ireland's 2009 Grand Slam. Selected for that year's Lions Tour until a bad knee injury intervened.

Declan Kidney selected him as a bolter in his World Cup 2011 warm-up squads and started him in three big RWC matches. His true evolution to a world-class scrum-half arrived on the 2012 tour to New Zealand. He went from physical presence and handy distributor to a punisher kicker. Can adapt his game to countless scenarios.


popular
Rangers legend says he and Roy Keane didn't speak during Man United spell
The coolest customer in hand-ball hoping to carry on the family tradition for Kilkenny
Rhodri Giggs accuses Gary Neville of hypocrisy over Salford sacking
Josh van der Flier and Sam Monaghan win big at Irish rugby awards
"County football isn't for everyone" - Down captain Barry O'Hagan hits back at criticism
FootballJOE's Career Path Quiz: #6
"I think there are only five Kilkenny players who are guaranteed to start on any given day" - Cody's motivational methods
You may also like
1 week ago
Josh van der Flier proving why Lions snub was so baffling in every single outing
2 weeks ago
Eddie Hearn hints at Katie Taylor v Amanda Serrano rematch in Ireland
3 weeks ago
England scrumhalf gets away with clear strike on Ireland's Michelle Claffey
4 weeks ago
Munster announce signing of French centre who can play for Ireland
1 month ago
Stacey Flood and Sam Monaghan star as Ireland get first Six Nations victory
1 month ago
Shamrock Rovers still look strongest of Dublin's five Premier Division teams
Next Page