Peter O'Mahony's Ulster performance should be hung in a rugby museum

Ulster were back from a sapping trip to South Africa and were missing some key players but do you think Peter O'Mahony gave a toss? No bloody way.

Munster needed a victory to get their Guinness PRO14 season sparked back to life after a couple of damaging away defeats. There were calls for 'leaders' to step up, from former players and pundits, but O'Mahony has been standing up for Munster ever since he first broke into the side.

He was superb in his season opener against Ospreys, in Cork, but was not the only Munster back row too quiet in Cardiff as Nick Williams ran back the clock. 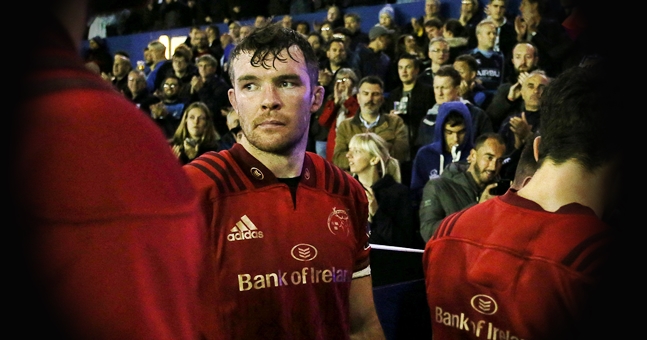 END_OF_DOCUMENT_TOKEN_TO_BE_REPLACED

On Saturday, at Thomond Park, he put on a masterclass at blindside. He won four turnovers and it should have been five. He scored a try in the corner. He jumped like a sprung coil in the lineout, made line breaks, beat defenders, hit more than his fair share of rucks and he stuck 12 tackles. The only thing missing was an offload, and a quarterback pass like Alby Mathewson's.

Before we go back and marvel at some of his best contributions, let's first look at his 54th minute tackle that sent winger Angus Kernohan back where he was coming from.

That O'Mahony, a flanker, creased Kernohan, a 94kg Ulster Academy winger, is no big surprise. The force of it was. It was a statement maker and it arrived 54 minutes in, with Munster 36-7 ahead and well on their way to a resounding win.

Munster may have run in nine tries, made 23 line breaks and carried for 624 metres, but this victory was largely down to the forwards. Joey Carbery and Rory Scannell got to treat us all to their wonderful displays in the 10/12 axis because O'Mahony and his packmates earned them the right to do so. 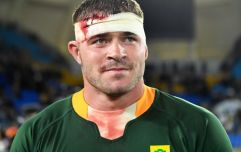 END_OF_DOCUMENT_TOKEN_TO_BE_REPLACED

Munster's starting pack, to a man, put in epic shifts. They made 55 carries for 145 metres, scored three tries and Billy Holland had a try assist.

They won 64-7 and you'd think, from that scoreline, that Munster were in cruise control. Rather, they were dogs off a lease for 80+ minutes. Munster's eight forwards stuck an incredible 119 tackles when they were on the pitch, and five of the starting pack were back on the bench by the 64th minute.

If you see such numbers replicated or bested again this season, or next, or next, come get us.

O'Mahony had already crunched into Darren Cave and Iain Henderson in the opening minutes when he pounced on Ulster fullback Peter Nelson for a steal.

Jordi Murphy and Henderson tried to shift him before Ulster No.6 Matty Rea arrived on the scene. CJ Stander tried to even the odds - well, three-on-two is better than three-on-one - but O'Mahony had already got the ball. He was clued in here and hit the deck, presenting cleanly so Munster could get an attack going.

Attack they did and Ulster, now with men out of position, were breached out wide, left by a smart kick. Alex Wootton took the ball on the run and teed up Dan Goggin in support for the opening try.

From O'Mahony's steal to Goggin dotting down took 53 seconds.

His next turnover arrived 10 minutes later when he zeroed in on the isolated prop Andrew Warwick. Ross Kane, Henderson and John Cooney tried to wrestle the ball back but the Munster captain was having none of it.

He made another turnover before the first half ended, with Munster 29-0 ahead but determined not to let off.

With 50 minutes on the clock, he patiently waited out on the right wing as Munster threatened on the left flank and then near the posts. He was rewarded by a darling of a looped Joey Carbery pass and he slid over for career try number 13.

There was another jackal and another steal after the break and he should have had at least one more, getting harsly penalised at one stage even though the referee had warned the Ulstermen to "release".

O'Mahony backed away with the ball in his hand, and the other on his hip, affronted that his strength and industry had not been rewarded. The look was quizzical and so was the 'What?' but O'Mahony was pissed off.

29 points clear and crushing Ulster's spirit, he was disgusted at the break in red momentum.

While the likes of Niall Scannell, Tadhg Beirne and the excellent Tommy O'Donnell were called ashore, three Munster forwards stayed on: O'Mahony, Stander and Holland.

No surprise, then, that they ran Ulster into the ground in the final 20 minutes. With that trio still urging men on, and driving forward relentlessly themselves, Munster went from 36-7 to 64-7 winners. Four converted tries and 28 points. The least they expected.

Leinster in the Aviva Stadium will be as big a test as these Munster lads will face anywhere in Europe this season. They will need their leaders to be at their very best to stand even an outside chance.


popular
Ireland team to play Wales: Andy Farrell's XV, the big calls and bold cuts
Jaden Sancho can't hide his smile as Old Trafford give heartwarming reception
Everton release brutal 59-word statement to confirm Anthony Gordon departure
Five confirmed changes and guidelines to have big impact on 2023 Six Nations
Discontent over Netflix access for Six Nations documentary as Johnny Sexton focuses on his Last Dance
"Every team did it!" - Paul O'Connell on Roy Keane comment to Ronan O'Gara that he couldn't deny
Owen Farrell praises Johnny Sexton in revealing interview ahead of Six Nations
You may also like
1 month ago
"No way!" - Ben Healy and Jack Crowley the heroes as Munster beat Ulster at the death
1 month ago
"They got walked over, like schoolboys" - The Leinster try that will stick in Munster's craw
1 month ago
Win or bust for Munster, and the three players that can help them knock off Northampton
2 months ago
Paddy Patterson delivers all-timer interview after inspiring Munster to South Africa win
3 months ago
Malakai Fekitoa avoids red card as Munster fall to Ulster defeat
3 months ago
"Thomas Ahern is going to be the new Paul O'Connell, in my opinion"
Next Page