Owen Farrell has received plenty of criticism - much of it merited - over recent years for his no-arm tackle technique. On Saturday, at Allianz Park, there was too much arm, at too much force and way too high.

The Saracens, England and Lions outhalf cost his club side dearly with a rash power play that saw him receive a straight red card and also ended the game for tackle recipient Charlie Atkinson.

END_OF_DOCUMENT_TOKEN_TO_BE_REPLACED

With Saracens' tied 15-15 with Wasps in their Premiership clash, Farrell spotted an opportunity to rush the 18-year-old scrum-half and force an error. Whatever way Farrell pictured it playing out, he came in all wrong and cleaved his arm straight into the side of Atkinson's head.

The teenager crumpled to the deck and Farrell, quickly realising he had gone too far, raised his arms in apology. It was not enough to spare him a red card.

Owen Farrell was shown a red card against Wasps for this tackle on Charlie Atkinson...

Lawrence Dallaglio considers the implications for Saracens AND England. pic.twitter.com/xZuOfEZK9E

END_OF_DOCUMENT_TOKEN_TO_BE_REPLACED

Former Leinster outhalf Jimmy Gopperth put the resulting penalty over the bar, to make it 18-15, and a Tom Willis try sealed victory for Wasps against a Saracens side already confirmed for relegation after a massive points deduction earlier in the season.

Farrell waited by the sideline to see how Atkinson was faring after that hefty hit. Still dazed, the young scrum-half accepted his extended hand before heading away for further assessments. 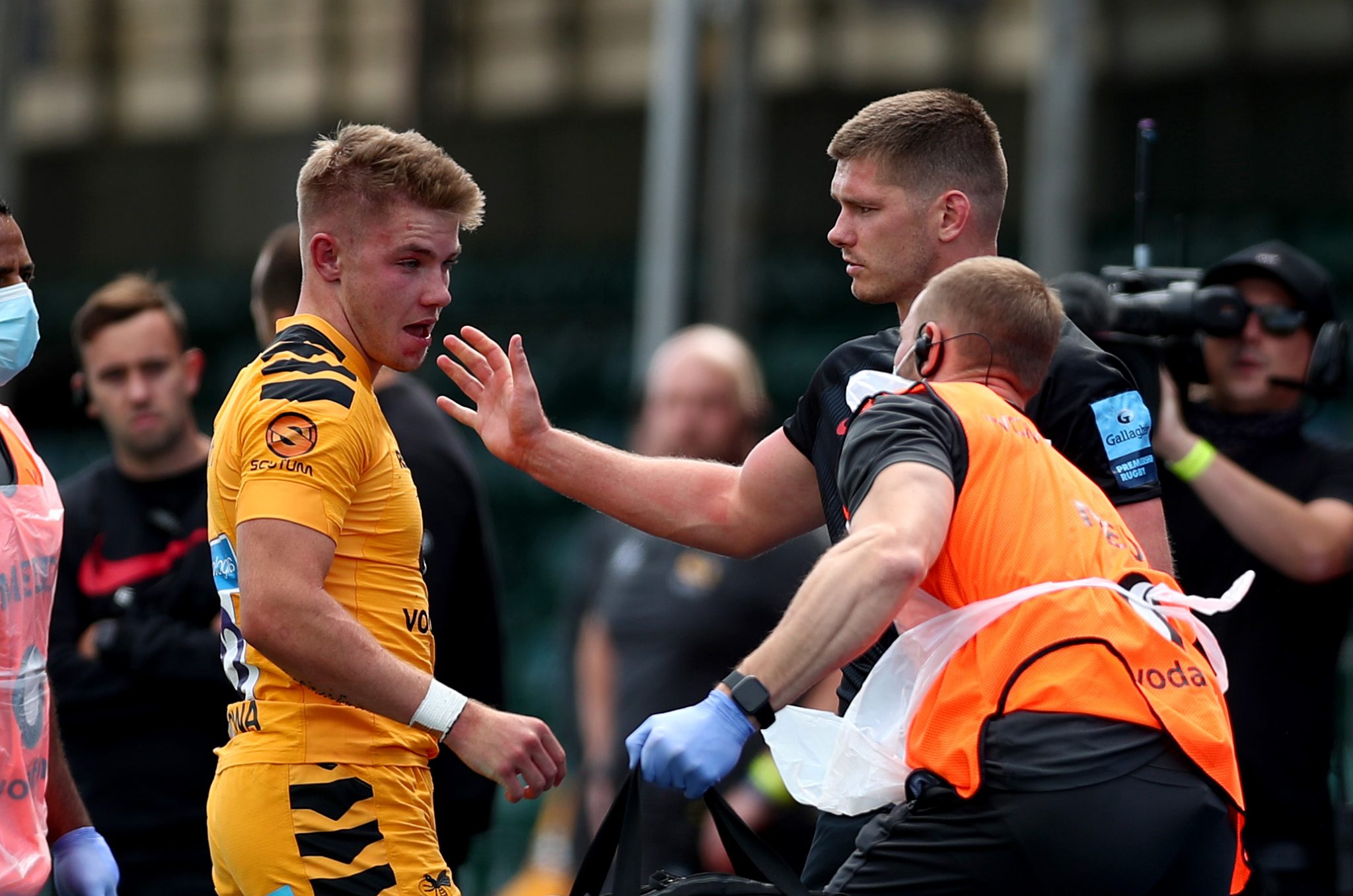 Charlie Atkinson is met by Owen Farrell on the sideline after the Sarries outhalf was red-carded for a hit on him. (Credit: Getty Images)

Speaking on BT Sport after the game, former Wasps and England captain Lawrence Dallaglio said there was no defending that sort of crunching, high hit by Farrell.

"It's a really bad one. I can't defend that. We know Owen plays hard - he plays on the edge - but that is bad. And he will get a lengthy ban... We know it has been a problem for Owen because of his tackle height... He's walloped him high. He knows that he has completely mis-timed his tackle. I'm not sure quite what he's aiming for there."

END_OF_DOCUMENT_TOKEN_TO_BE_REPLACED

The Sarries outhalf is looking at a ban somewhere between six [mid range] and 10 weeks [top end] for the tackle. If officials deemed that hit 'low-end', Farrell could escape with a two-week ban but that is highly unlikely.

Saracens are playing Sale Sharks on Wednesday and then face Exeter Chiefs next weekend. If the sanctioning process takes a few days, there is a chance the outhalf could be free to face Sale before any ban kicks in. Sharks, understandably, would not be best pleased with that as they are chasing the title.

Once the footage is reviewed and sanctions imposed, it is as close to a guarantee we can give that Farrell will be suspended for the Champions Cup quarter final against Leinster on September 19.

The only wrinkle here is the fact that English players are being asked to lace up and play twice a week in order to wrap up the 2019/20 season quickly. To that end, former England star Austin Healey argued, on BT Sport, that any ban Farrell gets should be halved as English players are lining out for games twice as much as usual.

Were such logic to be applied, and Farrell have a six-week ban halved for previous good behaviour and clear signs of remorse [this is not unusual], a three-week ban could end in time for that Leinster game.

Expect sense to prevail, though. Farrell's price for that rash tackle will be to miss his team's dance with Leinster at the Aviva Stadium in a fortnight's time.


popular
Get him a tuxedo, give him the All-Star and for crying out loud, someone bring that man out to America
Southampton pay tribute as Shane Long leaves the club after eight years
Fans react to Tottenham Hotspur's 'brilliant tease' for Richarlison signing
Tiernan Kelly and three other players hit with ban following tunnel brawl
Mohamed Salah signs new long-term contract with Liverpool
Former England Under-21 captain open to playing for Ireland
The four stone-cold certainties for All-Stars even as early as this

You may also like
2 days ago
Gavin Coombes one of four Irish players to push themselves into Test picture
2 days ago
Bundee Aki understandably emotional, as Ireland pay moving tribute to late Sean Wainui
2 days ago
Full Ireland player ratings after Maori All Blacks teach us an early lesson
3 days ago
"We could lose all five games" - Darren Cave with a rare take on Ireland's chances
3 days ago
Irish provinces discover their pool stages fate for Champions and Challenge Cups
3 days ago
Mike Lowry and Peter O'Mahony in First Test contention as Ireland shuffle deck
Next Page