One of life's good guys is back in action.

It appeared as if South Africa captain Jean de Villiers would struggle to play again, let alone make the 2015 World Cup, after he horrendously injured his knee in a November Test against Wales.

De Villiers, who played a season with Munster in 2009/10, must have feared for his career as he was stretchered off at the Millennium Stadium.

All told, the Springbok ruptured the anterior, medial and posterior ligaments in his knee, dislocated his left patella and tore his hamstring.

It was, in the words of South African physio Rene Naylor, 'The most horrific injury I have ever seen.'

Once the swelling died down and the injury was assessed, back home, he was given a return time-frame of nine to ten months. That would push his World Cup hopes very close. 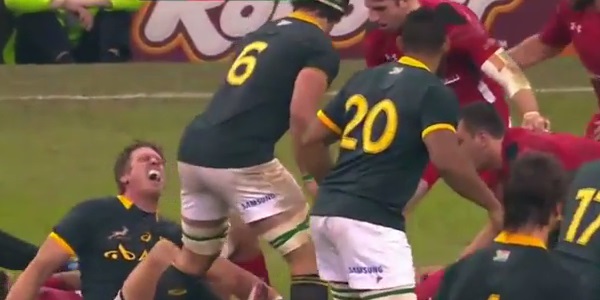 De Villiers buckled down to a strict training regime, once he had recovered and rehabbed. He had missed the 2007 World Cup, which the 'Boks won, and was determined he would do everything he could to give himself the best comeback chance.

END_OF_DOCUMENT_TOKEN_TO_BE_REPLACED

This morning, he was named in South Africa's team to face a World XV in an exhibition match that will serve as their warm-up for The Rugby Championship.

It has been 222 days since he endured the horror injury.

De Villiers faced the media today and, from his briefing, this is perhaps the most poignant remark.

@CharlieFelix just interviewed him - said when the last injury happened, he just wanted to be able to run with his children again..


popular
Jacob Stockdale and Johnny Sexton not spared by English press
'Were they up for it more than us? That's my responsibility' - Andy Farrell
Baz & Andrew's House Of Rugby - Twickenham carnage
ROG hits the nail on the head assessing Ireland's performance
QUIZ: How well can you remember this season's Premier League results so far?
Triple Crown wrenched away as England scrape Ireland off their boots
Tyson Fury reveals what happened when he sparred Anthony Joshua
You may also like
3 months ago
Devin Toner on thoughtful Ronan O'Gara message after World Cup heartache
3 months ago
"It was a complete and utter shock when Joe's name came up on my phone" - Devin Toner
3 months ago
Sinckler a stand-out, but more consistency needed - Flannery
3 months ago
"We haven't got a long-term or short-term estimate of when Joey is back" - Stephen Larkham
3 months ago
House of Rugby team agree on seven players in World Cup 'Best XV'
3 months ago
Pieter Steph Du Toit locks down World Player of the Year award
Next Page