What a fantastic performance, but has it come too late?

There have been strong reports that Peter O'Mahony will edge out Sam Warburton in the Lions XV for the First Test.

END_OF_DOCUMENT_TOKEN_TO_BE_REPLACED

If that happens, surely Warburton's place in the matchday squad must be in doubt. Were Warren Gatland to seek a genuine impact player off the bench, CJ Stander is the better option.

The Ireland man entered the tour with fitness doubts over him after struggling to recreate his mid-season form in the knock-out stages. Stander seemed to be affected by ankle issues and had lost some of that explosive power that makes him such a devastating ball-carrier.

He started his Lions tour with a solid if unspectacular outing against the Blues and had the misfortune of having a fine game in another midweek loss, to the Highlanders. Stander appears to be coming to the boil, though, and he would certainly be a great weapon on the Lions bench.

Against the Chiefs, in Hamilton today, Stander had his best game of the tour. 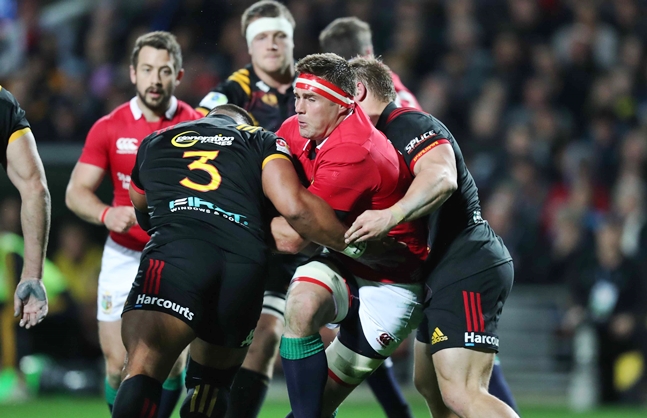 END_OF_DOCUMENT_TOKEN_TO_BE_REPLACED

As early as the second minute, the Lions No.8 was getting over the gainline and knocking Chiefs back on their heels. Not for the first time on tour, the Kiwis doubled up on Stander but, time and again, he got his team on the front-foot.

When the tourists were up against it, later in the half, Stander came up big with some hefty tackles and one crucial turnover.

END_OF_DOCUMENT_TOKEN_TO_BE_REPLACED

In the second half, with the Chiefs wilting, Stander got a chance to stretch his legs. He made 15 carries [44 metres gained] and featured strongly in the Lions penalty try that effectively sealed the victory.

He could have picked up his second try of the tour but Jack Nowell - as wingers often do - backed himself, cut inside and helped himself.

There is one factor that will surely stand against Stander and it is a big one. He played all 80 minutes and was bringing the fight until the final moments.

While he very often puts in whistle-to-whistle performances, Gatland would have called him ashore if he was planning to use him on the Lions bench this weekend. 25-6 up with 20 minutes to go, Gatland opted to leave on the bulk of his XV so clearly has his Test squad in mind.

Stander has done all he can but he may have to wait until the later Tests to get his chance.


popular
The four stone-cold certainties for All-Stars even as early as this
"He's actually smiling putting the ball over the bar. He should nearly be fainting." - Ryall on Limerick's legacy
"The economy was one of the big reasons" - Cadogan's move from an electrician to personal training
Eamon McGee just couldn't help himself with Armagh-melee tweet
Bizarre MLS rule means Inter Miami will get compensation for Gareth Bale transfer
Full Ireland player ratings after Maori All Blacks teach us an early lesson
'Does not look too good' - Andy Farrell offers worrying injury update on Cian Healy and James Hume
You may also like
3 years ago
James Haskell's first Lions Tour encounter with Tadhg Furlong was certainly unforgettable
4 years ago
Garry Ringrose only needed two games to expose regrettable Warren Gatland decision
4 years ago
Warren Gatland reveals concerns about Fields of Athenry before Lions Tour
4 years ago
Ben Te'o was rightly livid after some sneaky jersey swapping on the Lions Tour
4 years ago
Two Ireland stars included in French outlet's Team of the Year
4 years ago
2017 ended the debate about Johnny Sexton being Ireland's greatest outhalf
Next Page