66 minutes into the Guinness PRO14 final and a huge moment in the game.

Leinster were 18-10 ahead but Glasgow Warriors had just turned the ball over after surviving a storm.

Glasgow made a clearing kick and Rob Kearney chased back before pumping a up-and-under back into the opposition half. Up soared Stuart Hogg, not for the first time, and he claimed the take before, a split-second later, Kearney arrived.

Hogg was sent hurtling, uncontrolled, to the deck and his landing looked awful. Medics rushed on and a brawl ensued, with most of the starting XVs getting involved. 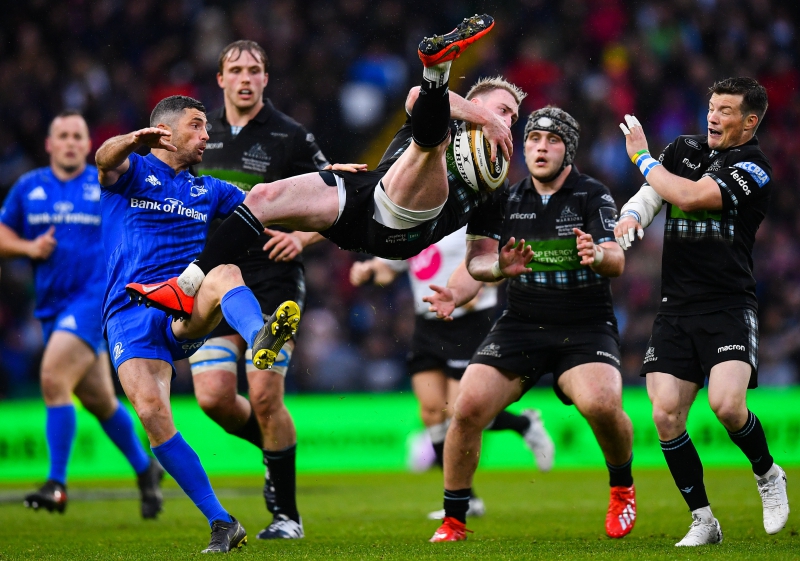 Stuart Hogg of Glasgow Warriors is tackled by Rob Kearney during the Guinness PRO14 Final. (Photo by Ramsey Cardy/Sportsfile)

Glasgow fans screamed for a red card and slow motion replays only increased their ire, and collective noise.

One first, second and third glimpse, the collision looked bad and Kearney was in danger of being shown a straight red card.

Referee Nigel Owens looked at a couple more replays and, with Hogg landing on his shoulder and not head, appeared to make his mind up.

There was a brief few words with the TMO before Owens turned to Kearney and said:

"You're careless, you got your timing wrong and it is a yellow card. Off you go."

"You're careless, you got your timing wrong and it is a yellow card.

A yellow card for Rob Kearney for a high challenge on Stuart Hogg.

Kearney returned for the final five minutes of the game as Leinster held on to win 18-15, and claim another league title.

In the post-match analysis on eir Sport, former Leinster star Luke Fitzgerald stated that the wrong colour of card had been flashed.

"I think it is a red card," he said, "and Leinster might have got away with one."

Over on social media, few were disagreeing and Owens was accused of "bottling" a big call.

Did Rob Kearney or Nigel Owens get man of the match? Those were the two involved in the biggest incident #pro14final

Conditions against Glasgow tonight & that’s without mentioning Nigel Owens poor performance. No complaints with Glasgow yellow but bottled a Kearney red & that’s without his ‘dodgy’ reffing at scrum. How many times can Healy’s elbow hit ground first before a pen against him?

Fuck. Unlucky Glasgow. Feels a bit like they lost that game to a couple of bad decisions by Nigel Owens.

The Glasgow fans were howling for calls all night, but they could have had a case over the Kearney incident.


popular
The SportsJOE 12 o'clock quiz | Day 105
The SportsJOE 12 o'clock quiz | Day 104
James Haskell on text exchange with Peter O'Mahony after Ireland's victory over Scotland
Can you name every English football club that begins with 'W'?
David Beckham recalls how a trip to Ireland got him in trouble with Alex Ferguson
Egan cleans out Spurs by reading the breaks and executing the blocks
"Shane was just gifted. He could play centre back, centre forward, he had everything"
You may also like
1 month ago
"He walks into the dressing room and Pienaar goes, ‘We can’t win’!"
1 month ago
Ryan Baird on his physical and mental preparations to hit rugby's return running
4 months ago
"Play him as soon as possible" - Ryan Baird exceeding great expectations
4 months ago
The future of Leinster and Ireland's second row is officially here
4 months ago
Guinness Pro14 preview: Leinster v Glasgow
4 months ago
Pro14 preview: Leinster v Cheetahs
Next Page