Wade was allocated to the Bills as part of the NFL's International Player Pathway Program and has been slated as a potential running back on the field. 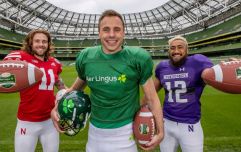 END_OF_DOCUMENT_TOKEN_TO_BE_REPLACED

At the conclusion of NFL training camp in August, players will be eligible for an international player practice squad exemption with teams being given an exemption for an eleventh practice squad member – ineligible to be activated during the season.

Wade said he retired from rugby for personal reasons last year as he finished his career as the third highest try scorer in the history of the Premiership with 82 tries by the age of 27.

“After playing nine years of professional sport for Wasps, I’ve decided to leave for personal reasons,” said Wade last year, who won his only England cap against Argentina in 2013.

“I would like to thank Wasps chairman Derek Richardson and Dai (Young, director of rugby) for their support, consideration and understanding in what is the most difficult decision of my life.

“I have loved the sport since I was introduced to it at the Royal Grammar School in High Wycombe.

“I would therefore like to thank everyone who has played a part in shaping my career.

“Rugby has privileged and honoured me with so many wonderful memories that will stay with me for the rest of my life.

“Finally, I want to thank my Wasps family: the club, my team-mates and especially the fans – you have always been superb to me. I wish everyone here all the very best for the future.”


popular
Ireland team to play Wales: Andy Farrell's XV, the big calls and bold cuts
Jaden Sancho can't hide his smile as Old Trafford give heartwarming reception
Everton release brutal 59-word statement to confirm Anthony Gordon departure
Five confirmed changes and guidelines to have big impact on 2023 Six Nations
Discontent over Netflix access for Six Nations documentary as Johnny Sexton focuses on his Last Dance
"Every team did it!" - Paul O'Connell on Roy Keane comment to Ronan O'Gara that he couldn't deny
Owen Farrell praises Johnny Sexton in revealing interview ahead of Six Nations
You may also like
3 weeks ago
'What are you doing?!' - Houston Texans fans are furious their team finally won a game
3 weeks ago
NFL star 'in critical condition' in hospital after saving his children from drowning
4 weeks ago
NFL star suffers cardiac arrest and is in 'critical condition' after tackle
2 months ago
Patrick Mahomes shows young pretender how it's done in thrilling Chiefs comeback
2 months ago
Josh Allen and Buffalo Bills left stunned by 'greatest catch in NFL history'
2 months ago
NFL round-up: Patrick Mahomes the hero and Kirk Cousins living his best life
Next Page