"We've got a lot of very hungry players and staff that want to make sure that we end the season on the right note."

It has been nine years since Munster last claimed some silverware at the end of a rugby season. They are up against it, this time around, and will be relying on JJ Hanrahan to help them along the way.

Guinness PRO14 officials are planning for the league to resume on the August 21-23 weekend and, on these shores, the plan is to kick off the return to rugby with inter-provincial games at the Aviva Stadium.

END_OF_DOCUMENT_TOKEN_TO_BE_REPLACED

Should rugby return then, as planned, it will have been a six-month pause in the season. For Munster, they are eager to ensure their return, and all the recent efforts they have been through, are not for the sake of two games. As it stands, Munster are eight points clear of Scarlets with Connacht a further two points back. They are pretty much guaranteed a semi-final against Conference A leaders Leinster and may not even have to win another game to get there.

"You’ve got to balance results out," notes Munster head coach Johann Van Graan, "and hopefully we will qualify for a semi and that might determine some selection. And then its four games in the Aviva and it doesn’t matter how you look at it, you’re going to face Leinster, a team that I think are unbeaten in their last 20 games, I’m not sure about the previous season but they haven’t lost in a very, very long time so great challenges ahead.

"We’re looking forward to it very much because we all just want to get back to rugby. So that balance in approach, if I can cut it down to one line, it’s going to be very important."

Leinster are red-hot favourites to wrap up the league by winning it at the Aviva Stadium in September but given that they are set to face Munster twice in those four Aviva Stadium games, one great performance by Van Graan's men could tip everything on its' side. Unfortunately for Munster, Joey Carbery is unlikely to play a role in the season's finalé. 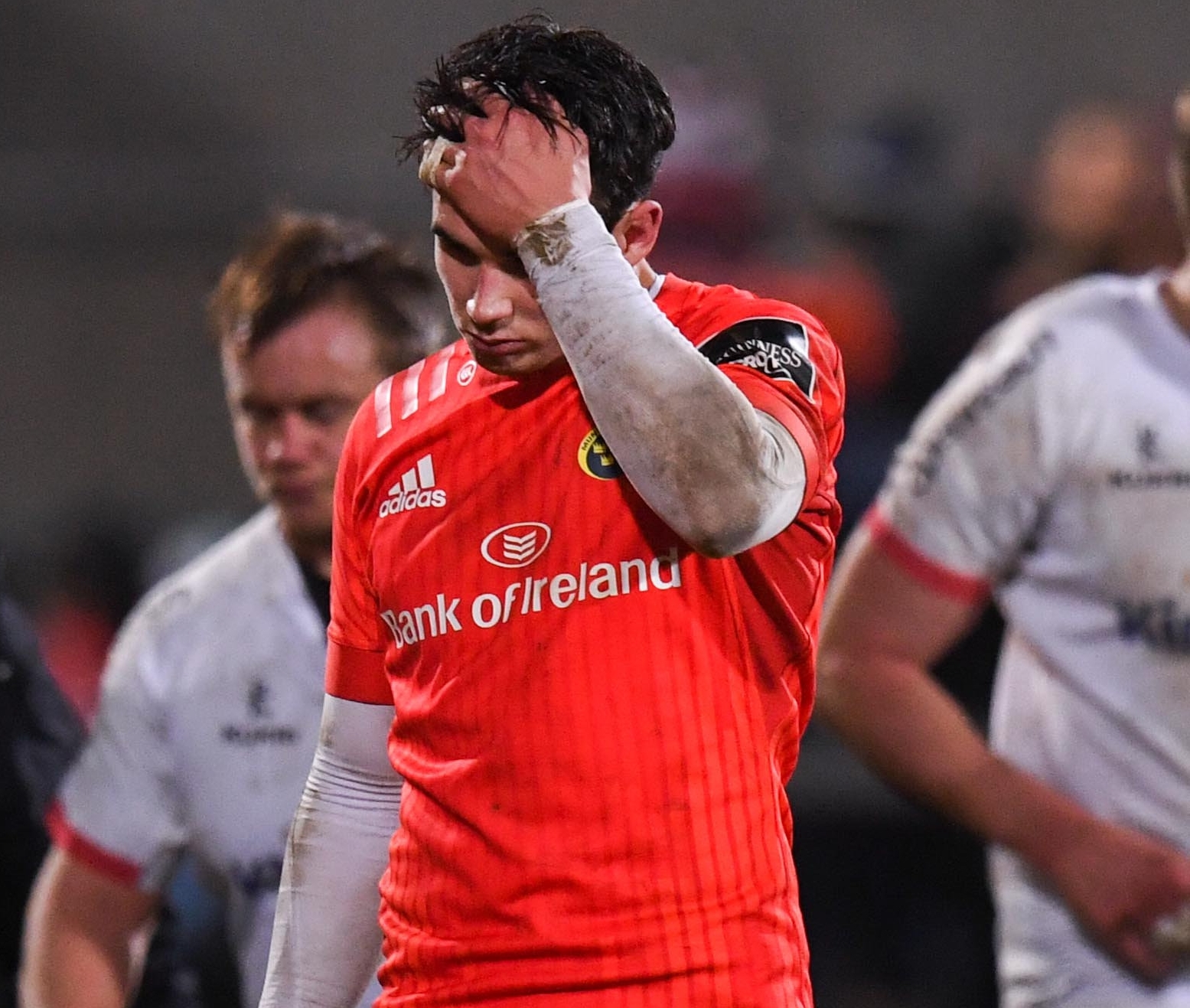 3 January 2020; Joey Carbery of Munster reacts following the Guinness PRO14 Round 10 match between Ulster and Munster at Kingspan Stadium in Belfast. Photo by Harry Murphy/Sportsfile

END_OF_DOCUMENT_TOKEN_TO_BE_REPLACED

On Carbery, who has had a bad run of injuries and set-backs over the past two years, the South African was not offering up any timelines for a playing return.

"I think he just wants to kick a ball again," he reflected.

"If you take out the name Joey, I think one of the most difficult things about a rugby player is that your highs are so high but your lows are so low. You might be starting for Ireland or for Munster and then you get an injury and you're out alone on the operating table. You recover at home with only your family and then the rehab process starts. That's the tough thing, doing the same thing day in and day out - maybe taking weeks or months before you even feel better. That's mentally the tough part, for Joey specifically, he just wants to get back on the pitch.

"He's doing everything he physically can, too. He's got a very positive outlook on life. He came to Munster for very specific reasons, and he wants to be part of this team, be part of the 23 each week. That's his goal, to get back as soon as he can.

"We discuss his injury every week. Obviously, Joey and I spend a lot of time [together] and it's important to put the person first and not always ask about the injury because the injury is there for all to see but actually how he's going with the player, the man himself. All credit to Joey and his family. He's got fascinating support from his girlfriend and his family and all from the club; the medical team, the coaching team - everybody is looking after him fantastically well. At the end of the day, Joey's got to fight through this and he's doing really well with this."

END_OF_DOCUMENT_TOKEN_TO_BE_REPLACED

Carbery was rushed back into action for the 2019 World Cup yet only had a bit-part role in that tournament as he was not fully fit. When he returned to Munster, a tough but necessary decision was taken to take him out of the firing line and send him for surgery.

With Tyler Bleyendaal hanging up his boots, Munster are left with JJ Hanrahan - as they have been for much of this season - as senior outhalf. The Currow native has 17 appearances (14 starts) this season and has 148 points to his name.

Van Graan says there will be serious competition to see who out of Jake Flannery and Ben Healy will deputise for Hanrahan in the first couple of games of the resumed season, but all the chips have been pushed behind Hanrahan.

It is coming on eight years since Hanrahan, after impressing in the Junior World Championhips with Ireland, made his senior Munster debut. If he can help steer Munster to Guinness PRO14 success, it could dramatically change how the rest of his career plays out. The crown is there, ready to be worn.


popular
Talksport presenter puts Martin O'Neill to the pin of his collar over Declan Rice and Jack Grealish
World Cup Power Rankings: The top eight pundits of the tournament so far
World Cup Power Rankings: The top 10 players at the tournament ahead of the quarter-finals
Gary Neville sticks up for Ronaldo as contextless pictures and videos taken as gospel
Rory McIlroy explains 'falling out' with Shane Lowry that lasted a few years
Ballyhale's Colin Fennelly felt Ballygunner's victory speech was disrespectful
Roy Keane scores winning goal past Micah Richards in ITV v BBC pundits match
You may also like
2 weeks ago
Alternative World Rugby Dream Team selected, with two extra Ireland stars
2 weeks ago
"Two Irish players are best in the world" - Rugby reacts to big Josh van der Flier and Terry Kennedy awards
2 weeks ago
Two baffling omissions as four Ireland stars make World Rugby 'Dream Team' of the Year
2 weeks ago
Josh van der Flier claims World Rugby Player of the Year at Monaco ceremony
2 weeks ago
"Highlight of my Ireland career" - Behind the scenes as Jack Crowley and Ross Byrne covered for a legend
2 weeks ago
Bundee Aki reminded us all of his best qualities, on a night Ireland couldn't do without him
Next Page