Munster announce signing of French centre who can play for Ireland

The 25-year-old can represent France, England and Ireland at Test level.

Munster Rugby has announced the signing of French centre Antoine Frisch, from Premiership side Bristol Bears.

Frisch, who has played in the lower leagues of French rugby, with clubs like Tarbes, Massy and Rouen Normandi (PRO D2), was signed by Bristol boss Pat Lam, last summer. A statement from the province reads:

'Munster Rugby and the IRFU can confirm the signing of centre Antoine Frisch on a three-year contract from the start of next season.

'From France, the 25-year-old is Irish-qualified through his maternal grandmother who hails from Dublin.

'He joins the province from Bristol Bears where he has made 13 appearances for the Premiership side so far this season.' 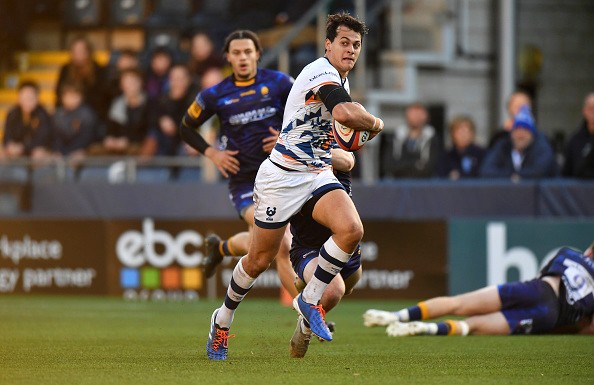 END_OF_DOCUMENT_TOKEN_TO_BE_REPLACED

The arrival of Antoine Frisch, over the summer, will bring another centre into the senior squad ranks. Damian De Allende will leave the province at the end of the season, with Malakai Fekitoa arriving from Wasps in the summer.

Elsewhere, Munster have Chris Farrell, Rory Scannell and Dan Goggin as centre options, while Alex McHenry and Shane Daly could also fill in there if needed. Frisch has some outhalf experience, but is primarily a centre [he can cover 12 and 13].

This is the first new signing announced since forwards coach Graham Rowntree was announced as the man to step in as head coach when Johann van Graan leaves at the end of the season.

In other Irish rugby news, Leinster and Ireland hooker Sean Cronin has announced he will retire from professional rugby at the end of the season. The highly decorated hooker, who has won six league titles and two European Cups with Leinster, is going to take over as head coach of St Mary's College RFC, ahead of next season.