Irish rugby fans had been waiting for some humble pie to be eaten, but it never arrived.

Mike Tindall had been stirring the pot for a number of weeks, in the lead-up to Ireland's Guinness Series clash with New Zealand and claimed they will "never" do well in a World Cup.

END_OF_DOCUMENT_TOKEN_TO_BE_REPLACED

Tindall, who won a World Cup with England in 2003, criticised Ireland's playing style on House of Rugby. Following Ireland beating the All Blacks, winning 11 of their 12 Test matches in 2018 and claiming World Rugby's 'Team of the Year' prize, in Monaco, it seemed as if Tindall would have to hold his hands high and admit he had it wrong,

"If you flash back to the bits I did say," Tindall began, on the latest episode, "I said they have the best pack in world rugby, at the moment. I said they are exceptional at winning games; they've won 24 out of 27.

"I just want to see Stockdale, and that try he scored against New Zealand, I'd like to see him having the ball a little more... and for them not to feel so controlled. The reason I said what I did [about the World Cup] was because in 2015, they played very similar rugby - not as well as they are playing at the moment - and then they got a few key injuries and lost to Argentina.

"I worry that if they play that way, and in a short format like a World Cup - where you are having to back it up week-in, week-out, that if they got injuries they wouldn't be able to do it."

So, not exactly rowing back on his World Cup comments, despite Ireland's continued success. Tindall wants to see a more "energetic" Ireland but still feels injuries could hobble their hopes of going far in the tournament.

Tindall then did not help matters by referring to Tadhg Furlong as 'Tad' before saying the Leinster prop was the stand-out in November because 'I love the Irish'.

Tindall is not saying Ireland can't win the World Cup next year, he now claims, but would like to see them playing a more expansive brand of rugby.

Andrew Trimble, one half of Baz & Andrew's House of Rugby, was present when Tindall make a case for his own defence. Back in Dublin, the former Ulster and Ireland winger gave his take on Tindall's back-tracking. 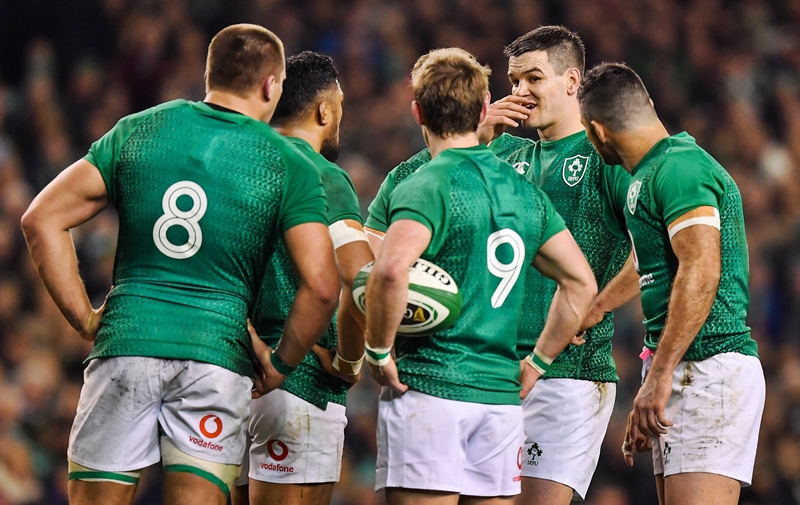 "He tried to give us a balanced explanation of why he was being critical of Irish rugby," said Trimble, "and he just ended up being more critical and more disrespectful."

During the UK airing of House of Rugby, Tindall also aimed a little jibe at Johnny Sexton winning World Player of the Year ahead of Beauden Barrett.

END_OF_DOCUMENT_TOKEN_TO_BE_REPLACED

Stifling a laugh, he said, "I'm just saying you can now get World Player of the Year for playing like 10 games... I'm joking! He deserved it."

For the record, Sexton has so far played 22 games [10 for Ireland and 12 for Leinster] in 2018 and won a Grand Slam, Guinness PRO14, Champions Cup, away Test Series in Australia and was a key figure in Ireland's sweep of November Tests. It's a good thing Tindall was joking, then.