Back in 2011, in the lead-up to the World Cup, Mike McCarthy made his Ireland debut at blindside in an away loss to Scotland. He was 29, and it was the realisation of a life-long mission to wear the green jersey.

McCarthy had been playing with Connacht for four seasons, at that stage, but had always been eligible to line out for Ireland. He would go on to play 19 times for Ireland and pick up some trophies with Leinster, but can still vividly recall every moment of his Test debut.

"I think it was just a massive relief that I got there in the end. But I started that game at 6, and I never got capped again at 6, after that! Same as everyone else that gets capped - very proud day and great to have my family there. It's one I'll cherish and remember forever."

END_OF_DOCUMENT_TOKEN_TO_BE_REPLACED

McCarthy had a circuitous path to that day in Edinburgh, though. He had trained with Ireland U21s, back in 2002, but ultimately ended up representing England in the Junior World Championships. He would have to wait nine more years before he finally got to wear the Ireland jersey he had first set out to wear.

On House of Rugby URC  [LISTEN from 24:o0 below] McCarthy spoke with Greg O'Shea and Megan Williams about his long road to winning his first Test cap, 'Plastic Paddy' jibes and singing the Irish anthem. 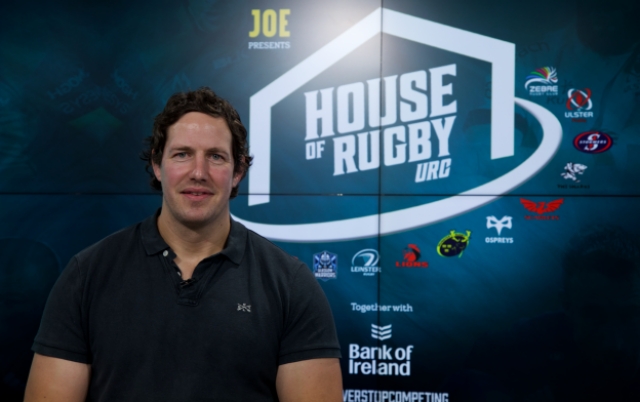 END_OF_DOCUMENT_TOKEN_TO_BE_REPLACED

Born in London but honing his rugby skills at Sedburgh School in Cumbria, Mike McCarthy returned south and got his first taste of professional rugby with Wasps.

He ended up playing a full season with Connacht in 2003/04 before making strides with a Newcastle Falcons side that contained Jonny Wilkinson and Matthew Tait.

"A lot of people don't realise that I was trying to play Ireland U21s before England," he says.

"I was at Wasps from 2000 to 2003, and I was flying over to Dublin to do the training for the Six Nations. But I wasn't good enough, so wasn't getting in the team or getting in the squad.

"I was then missing Under 21 games with Wasps, and I needed to be making a mark. So I stopped travelling over, in the end, because I wanted to be playing games for Wasps. I needed to get that first team contract.

"Everyone wants to be playing to the highest possible level. So, I got called up to the World Cup squad, with England. I jumped at the opportunity.

"But it was so awkward, because we landed in Johannesburg and we're queuing up in passport control. Ireland were standing right there. I'm queuing here. There's a few awkward stares. Then, to top it off, we get to the hotel and Ireland are staying in the same hotel as us. There was a bit of slagging, but it was all friendly banter.

Responding to a listener question on singing Amhrán na bhFiann, McCarthy said, "I didn't have to learn off the anthem; not really. I knew it pretty well. I made a good fist of it."

Asked if he sang both the Irish and English anthems, McCarthy shot back, "Both! I'm not singing now, though." 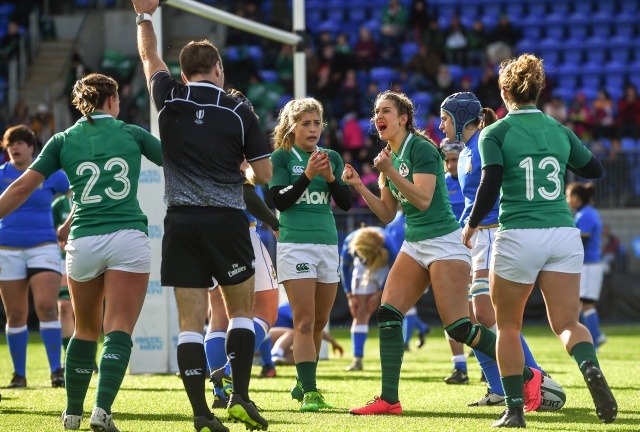 Megan Williams celebrates scoring for Ireland against Italy, in the 2018 Six Nations. (Photo by David Fitzgerald/Sportsfile)

Megan Williams knows all about the jostling McCarthy received during his playing career. Hailing from the North of England, Williams was called into Ireland's Sevens squad in 2014 after Kerri-Ann Craddock asked her along for training sessions with the Irish Exiles, in London.

With her father and paternal grandparents all from Roscommon, Williams was called in by Anthony Eddy and went on to impress on the Sevens circuit before making an impression in the 15s game and appearing for Ireland at the 2017 World Cup and in Six Nations championships.

Asked by Williams if he was ever called 'Plastic Paddy' - a jibe she was often on the receiving end of - McCarthy replied, "Oh yes, all the time."

"A few nights before my first cap," Williams recalls. "I had some of the girls helping me learn Amhrán na bhFiann."

Greg O'Shea is Limerick born and bred, but even he admits to nerves at having to belt out the national anthem with plenty of watching eyes.

"I was nervous about knowing the words properly," he says. "I remember being over with Ireland Under 18s in Spain, and we were playing Portugal.

"We were standing there and it was all our first time singing our national anthem for our country. A massive moment. We didn't know how loud to sing or what to do... we went out and beat them, and in the review we got murdered by Terry McMaster, the head coach, about how unpatriotic we were for not singing the anthem with pride."

Stung by the criticism, O'Shea and his Ireland teammates went out and beat a France side containing Gael Fickou after 'belting out the anthem' beforehand.


popular
Mario Balotelli, Luis Suarez, Fernando Torres and why Rio Ferdinand "hated them"
"I remember just hugging this Irish guy" - How one Kiwi rugby star reacted to Ireland's historic series win
"I don’t trust you" - Joey Barton delivers brutal dismissal of Irish defender
Down county football is in tatters, but Conor Laverty is the man to piece it back together
"I'll ask for everyone that comes to the game to wear purple and roots for us" - Pat Fitzgerald
Gatecrashed interviews and chip-shop previews - Wexford GAA's online coverage sets the standard
Javier Hernandez offers to play for Manchester United for free
You may also like
1 week ago
“My confidence was on the deck" - Aaron Connolly explains why he has made the move to Italy
2 weeks ago
Every Irish transfer in football, this summer, as several big deals get done
2 weeks ago
Six Irish players make damn impressive 'World XV' that would take some beating
3 weeks ago
The frontrunners for Ireland's 33-man squad for the 2023 World Cup
3 weeks ago
All Blacks media manager explains why Ian Foster appearance was cancelled after Ireland defeat
3 weeks ago
Warren Gatland selects nine Irish players in his strongest Lions XV, right now
Next Page