"I don’t feel I am able to fulfill my responsibilities at the moment in my current mindset."

Wallabies captain Michael Hooper has been given the backing of his teammates, head coach and the wider rugby community after withdrawing from international duty due to personal reasons.

In a statement released by Rugby Australia, it was stated that Hooper 'believes he’s not in the mindset to fulfil the responsibility that goes with leading and representing his country at this point in time'.

END_OF_DOCUMENT_TOKEN_TO_BE_REPLACED

Hooper was over in Argentina with his team ahead of their Rugby Championship opener against the Pumas, but approached management to let them know he was not in the right head-space to lead the team. He then addressed the playing squad to inform them of his decision, and 'tell them and that he has the utmost confidence in the group to get the job done'.

The 30-year-old has featured in 121 out of a possible 124 Tests for Australia since his debut for the green and gold, in 2012. Hooper commented:

"While this decision did not come easily I know it is the right one for me and the team at this point in time. My whole career I’ve looked to put the team first and I don’t feel I am able to fulfil my responsibilities at the moment in my current mindset." 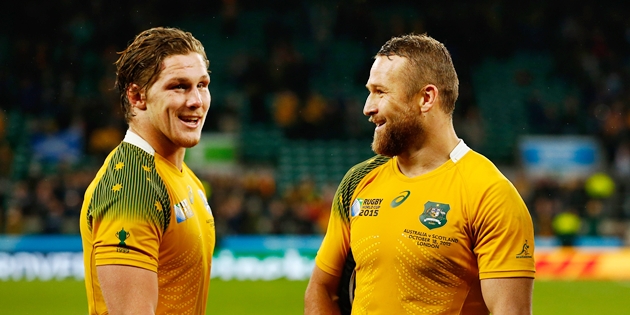 Michael Hooper and Matt Giteau of Australia pictured together at the 2015 World Cup. (Photo by Dan Mullan/Getty Images)

Michael Hooper backed by his coach, and union

Wallabies coach Dave Rennie said, "Michael Hooper is one of the most professional and impressive men I’ve coached I know this has been a difficult decision for him.”

"He’s shown true courage by acknowledging where he is at and acting on it. We will support him in any way we can and I know the team will be focused on getting the job done [against Argentina]."

END_OF_DOCUMENT_TOKEN_TO_BE_REPLACED

Rugby Australia chief executive Andy Marinos commented, "Michael is an incredible leader, it takes a brave man to identify where he’s at and come forward whilst having the best interests of the team at heart.

"His wellbeing is and remains the highest priority right now where Rugby Australia and the Australian Rugby community will do everything to support him and his family.”

James Slipper will lead Australia against Argentina, while Fraser McReight will replace Hooper in the number seven jersey.


popular
Iran demand action by FIFA after USA team change flag on social media
Argentina reach World Cup last-16 with convincing win over Poland
"Nowadays, even if I don't hit a ball, I don't care as long as we win" - Gleeson learning from the past
World Cup 2022 Day 11: All the major action and talking points
Thibaut Courtois warns teammates after leaks emerge from Belgium camp
Cristiano Ronaldo 'agrees £173m-a-year deal' with Saudi club
Ronaldo finally reveals why he got that hideous haircut
You may also like
1 week ago
"Two Irish players are best in the world" - Rugby reacts to big Josh van der Flier and Terry Kennedy awards
1 week ago
Two baffling omissions as four Ireland stars make World Rugby 'Dream Team' of the Year
1 week ago
Josh van der Flier claims World Rugby Player of the Year at Monaco ceremony
1 week ago
"Highlight of my Ireland career" - Behind the scenes as Jack Crowley and Ross Byrne covered for a legend
1 week ago
Bundee Aki reminded us all of his best qualities, on a night Ireland couldn't do without him
1 week ago
Peter O'Mahony delivered some fitting Jack Crowley comments after surprise Test start
Next Page