Fairly stinging from the former Leinster and Scotland coach.

Matt Williams is leading the charge calling on World Rugby to make an immediate law change after the circumstances that led to Italy losing TWO players after ONE man was sent off.

18 minutes into their Six Nations clash with Ireland, the Italians had replacement hooker Hame Faiva sent off for a high shot on Dan Sheehan. As starting hooker Gianmarco Lucchesi was already off injured, Italy were forced to go for uncontested scrums and had to play the rest of the game.

END_OF_DOCUMENT_TOKEN_TO_BE_REPLACED

The current World Rugby laws state that if a team has lost front row forwards and must go to uncontested scrums, they must then lose an additional player. The law was introduced to prevent teams losing the scrum battle from claiming they have an injury, in order to go uncontested. Few that drafted the low would conceive a team could lose two hookers in the space of just nine minutes.

Italy had to play out the game with only 13 men, and played out the final six minutes with only 12 after Bran Steyn was sin-binned. Following Ireland's 57-6 win over the Azzurri, Williams launched into the law-makers. 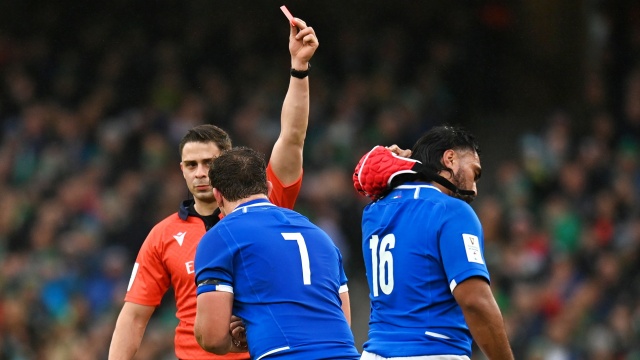 END_OF_DOCUMENT_TOKEN_TO_BE_REPLACED

"It's the rugby rules," explained Italy coach Kieran Crowley after the game.

He cited how the law was changed after France exploited the 'non-contested scrums' guidelines in a Six Nations game, a few years back. "It's something we have no control over," said a restrained Crowley.

Matt Williams had no issue taking a cut off those in World Rugby that, to his mind, ruined the game as a contest and spectacle. Speaking on Virgin Media, he declared:

"We've got to be the only team sport in the world that constantly shoots ourselves in the foot. If that's the first game of rugby you're watching, you are not going to watch a second.

"Many of our laws are not fit for purpose. The players out there and the officials on the field are not to blame. They are simply implementing the law. And it's not just that law, where Italy are so unlucky to be put down to 13 men. There are so many other laws, but we can't get into them now."

"Everyone wants to kick them out of the competition," Williams added, about Italy. "Man, when you are down you get kicked, don't you? They got kicked hard, and they didn't quit...

"The loser today was not Italy, or Ireland. The game of rugby lost, on the international stage... I would think [that it's an easy fix], but what I'm astounded by is the muppets have left it in there!"

"Why hasn't that been fixed?" Williams asked. "That's their job."

"It is a damning statement on our game what occured out there today."

Both Rob Kearney and Shane Horgan were both on the panel with Matt Williams and agreed rugby 'was not helping itself' with these laws that have too adverse an affect on a game. Kearney remarked that the existing law 'may change at 9am, on Monday morning'.

It will certainly be interesting to see what the fall-out from this game is, as it did impact on what was shaping up as a nice contest.