The French referee was not having it from Murray.

Conor Murray was on as scrumhalf for the final 20 minutes, and British & Irish Lions captain, after Alun Wyn Jones was subbed off.

At the end of the 2017 Lions Tour, the tourists got the rub of the green when Romain Poite failed to award a late penalty to the All Blacks. Kieran Read and the whole Kiwi nation was aghast. 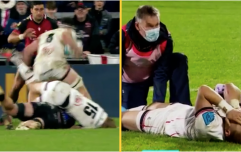 END_OF_DOCUMENT_TOKEN_TO_BE_REPLACED

Four years later and it was another French referee making a late penalty call. On this occasion, it went against the Lions and - just like he did in 2009 - Morné Steyn stepped up to keep his nerve.

The Lions had levelled the scores at 16-16 but a couple of knock-ons gave all the momentum to the Springboks. Referee Mathieu Raynal awarded a penalty to the hosts, from 34 metres out, with 78 minutes gone on the clock.

Crazily, Herschel Jantjes decided to take a quick-tap and he was swallowed up by red jerseys. Here is where Raynal made a huge call.

He decided that the Lions players had not backed off 10 metres so he had been obstructed and the quick-tap would not stand. This is the exchange he had with Murray, who was acting as captain in the closing stages:

RAYNAL: He took the ball out...

MURRAY: He took the quick-tap.

RAYNAL: There was clear interference by the [Lions] tackler.

It was a reprieve for the South Africans and, cool heads finally prevailing, Steyn stepped up and landed the penalty that made it 19-16. There was time for a restart, but the Springboks saw it out to win the series 2-1.

Just like back in 2009, Morne Steyn kicks South Africa ahead in the final few minutes of the final Test against the British and Irish Lions. ⏮ pic.twitter.com/likuTnNdNt

Following the game, Lions coach Warren Gatland bemoaned 'a couple of 50/50 calls' that went against them, but he did not linger on the match officials' decisions. He commented:

"I thought the referee had a good game. We have no complaints with the referee or assistant referees tonight... South Africa took one or two opportunities and we didn't."

Earlier in the second half, Murray was getting short shrift from the referee. When the Munster scrumhalf asked him to look at Eben Etzebeth slapping the ball down as he was trying to pass, Raynal barked back, "Conor, I'll go to the TMO if I want to."


popular
Solskjaer gamble on Harry Maguire backfires in most horrendous way
"Come on, who is better than Mo Salah at the moment?" - Jurgen Klopp
José Mourinho swaps Conor McGregor a Roma jersey for some whiskey
WATCH: Munster fans in Paris pay tribute to Anthony Foley with spine-tingling Fields of Athenry rendition
"I'll go back running the roads now and make sure my body doesn't get lazy"
Alex Ferguson wrote Mickey Harte a letter - ex Tyrone boss reveals in new memoir
GAA at its best as Bellaghy players run into team-mate who buried his father that morning
You may also like
4 days ago
Johnny Sexton still the king, but Andy Farrell faces huge decision
4 days ago
"The guy just can't catch a break" - RG Snyman back on gruelling comeback trail
5 days ago
Munster confirm RG Snyman has re-ruptured his cruciate ligament
6 days ago
Worrying scenes for Munster as RG Snyman lasts only nine minutes against Scarlets
1 week ago
World Rugby to ban matches featuring red and green kits to avoid colour blind clashes
1 week ago
Club World Cup talks underway as rugby moves towards global calendar
Next Page