So says Maro Itoje as he sits, wrapped up warm, at England's training base at Pennyhill Park.

Having endured a tough run of it in early 2018, England have won four of their last five games heading into the Guinness Six Nations.

END_OF_DOCUMENT_TOKEN_TO_BE_REPLACED

Itoje has reason enough to be confident. He is part of a Saracens side that has made the Champions Cup knock-out stages as number one seeds. With the national squad, he is training with the Vunipola brothers, with George Kruis by his side in the second row and with Owen Farrell teamed up with Manu Tuilagi at 10-12.

England's 24-year-old lock acknowledges that Ireland are deserved favourites for the opener at the Aviva Stadium but he senses his country are capable of turning their hosts over. Should they pull it off and beat Ireland in Dublin for the first time since 2013, England would be installed as favourites to win the championship.

Itoje is relishing pitting himself up against many of the Irish players he toured New Zealand with, in 2017, as a British & Irish Lion. The first person he is asked about - in the official Ireland vs. England matchday programme - is a man that outfoxed him at the Aviva Stadium back in March 2017 - Peter O'Mahony.

“Peter is a very good player and very diligent around the lineout,” Itoje comments. “The lineout means a lot to him and he puts in a lot of work there. He is such a passionate player as well, and that is his area of expertise.” 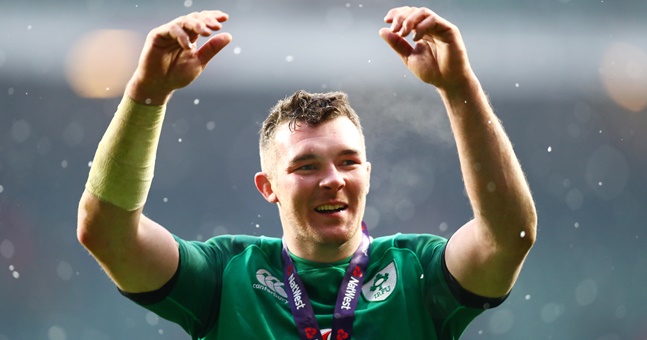 Itoje roomed with injured Ulster lock Iain Henderson in New Zealand and clicked immediately with Jack McGrath and Tadhg Furlong. On the Leinster tight-head, he said:

“Tadhg was just fantastic on that tour and Johnny Sexton was such an important player.”

END_OF_DOCUMENT_TOKEN_TO_BE_REPLACED

Another player that Itoje will doubtless battle with several times, in the coming months and years, is Leinster and Ireland lock James Ryan.

“James has done really well since his debut, a couple of seasons ago," he says. "I always look forward to playing against the top players and this encounter will be no different.”


popular
"I never really cried or got emotional over what I've done as an individual. I couldn't give a s***"
Six golfers that could improve Europe's fortunes at 2023 Ryder Cup
"If I break my wrist, it's on f***ing both of you." - Koepka and Berger act the spoiled child
The FootballJOE Pub Quiz: Week 7
"I was off the grid" - Aidan O'Shea respond's to Mayo criticism after club championship win
'I won The Open by six shots in my home country, but this was the best week of my golfing career'
Garry Ringrose raves about four young Leinster stars to watch this season
You may also like
1 week ago
Cork duo demolish Hull in Championship clash
1 week ago
Katie McCabe believes that equal pay deal with FAI "doesn’t add pressure"
1 week ago
"Johnno went, 'We’re not moving! You're trying to mess us about!'" - Ben Kay recalls red carpet controversy
2 weeks ago
Clinton Morrison shares advice Roy Keane gave him on morning before Saipan showdown
2 weeks ago
Full Ireland player ratings as underdogs Spain put World Cup hopes in danger
2 weeks ago
Ireland's best XI under Stephen Kenny starting to take shape
Next Page