"Playing against him, for Ulster, you knew what kind of man he is."

Marcell Coetzee took the tough decision, back in late 2020, to leave Ulster Rugby after repaying the faith they showed in him, on a couple of occasions.

The South African was a marquee signing for Ulster, in 2016, but injuries meant he managed just five games in his first two seasons. The province stuck with the back-row and he delivered, in wide spades. He played 57 times over the next three years, scored 16 tries and delivered a stack of big performances.

END_OF_DOCUMENT_TOKEN_TO_BE_REPLACED

He was still allowed to leave a year before his full contract at Ulster ended, but explained how he wanted to get to his family in South Africa, build a title-contending team with the Bulls and get back in the mix for Springbok selection.

Last Friday, at The RDS, he returned to Ireland and put in another monumental shift to help knock out reigning PRO14 [now United Rugby Championship] champions Leinster. He got reacquainted with a few old Leinster vs. Ulster sparring partners, and shared his thoughts with Johnny Sexton when he burst off the replacements bench and started geeing up both sets of players, and fans.

END_OF_DOCUMENT_TOKEN_TO_BE_REPLACED

The following day, it was announced Marcell Coetzee was back in the Springboks squad, for their summer Test Series against Wales. Whatever goals he set for himself after saying goodbye to Ulster, he could well exceed them if he helps the Bulls to a URC title in his first season back.

On House of Rugby URC [LISTEN from 3:15 below], that Leinster loss to the Bulls was discussed, in-depth, by Greg O'Shea, Jason Hennessy, Lindsay Peat and Connacht and Ireland winger Mack Hansen. They also touched on a revved up Sexton entering the fray, with the game still on the line. 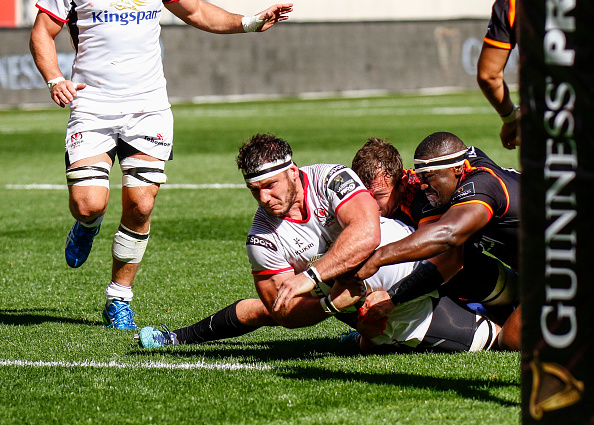 Marcell Coetzee scores for Ulster against the Southern Kings, in 2018. (Photo by Michael Sheehan/Gallo Images/Getty Images)

Marcell Coetzee on Sexton run-in and making the URC Final

END_OF_DOCUMENT_TOKEN_TO_BE_REPLACED

Leinster were trailing the Bulls 24-14 and had James Ryan in the sin-bin when their captain, Johnny Sexton came on for Ross Byrne with 26 minutes to play.

The reigning champions had to defend their own tryline for a short spell before making their way up-field. There was a grubber up the line that would lead to a Bulls lineout, but not before Sexton hared up to prevent any quick plays, and got jostled in return for it. Marcell Coetzee and Sexton exchanged heated words before Bulls teammate Elrigh Louw got up close and personal with the No.10. It was left to former Munster forward Arno Botha ushered the outhalf away.

Asked what was said between himself and Sexton, Coetzee laughs. He says:

"I won't quote exactly what was said, because I know families are watching!

"Look, I've got a lot of respect for Johnny Sexton as a player, first of all, and what he has achieved for Irish rugby as well. Playing against him, for Ulster, you knew what kind of man he is. He's a competitive man and he wants to win at all times.

"You could see the energy he brought when he came on the field. He got the guys and the fans behind him. That's the type of player, and competitor he is. He wants to win at all times, even if he's down 10 points. He made a huge difference, coming on.

"But, yeah, leave it all out there on the pitch. Afterward, we shook hands, nodded at each other and carried on as usual. Just another day in the office!" 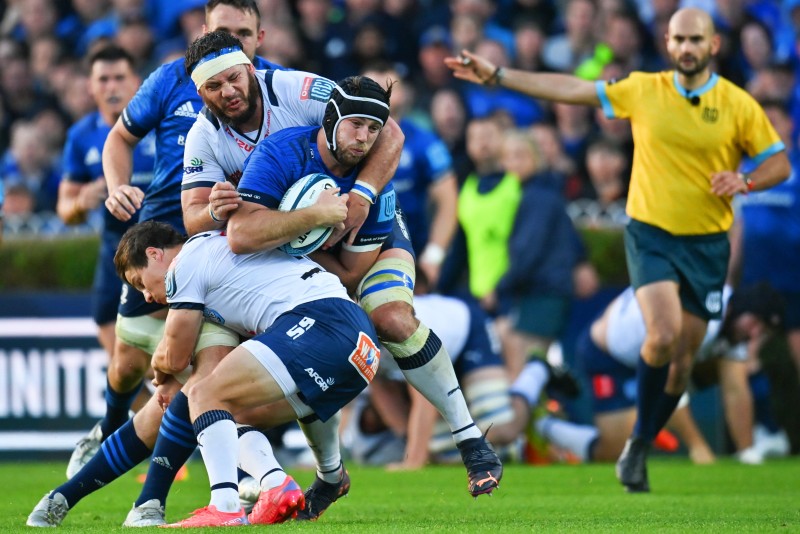 Caelan Doris of Leinster is tackled by Chris Smith and Marcell Coetzee of Vodacom Bulls. (Photo by Harry Murphy/Sportsfile)

The Bulls could well have been facing Ulster in the URC Final, were it not for the last-gasp, converted try they conceded against the Stormers. It set up an all South African final, and stung a Bulls playing watching on from Dublin.

"There are fine margins in playoff rugby," Marcell Coetzee tells us. "You have to use your opportunities when they present themselves. It was interesting, watching that game in Ireland, but it was great to get home [for the final] and looking forward to the contest, this weekend."

For Coetzee, leaving Ulster was a wrench - he remains in contact with many of their players - but life and rugby back home has more than made up for any pangs he may feel when he sees his old club in action.

"The first few weeks did not look too promising for us, as a team. But, as the season grew longer, we grew more confident. Look, it's very special. It's a special bunch of boys I'm working with, as well as being looked after by world-class coaches.

"As a player, you always want to develop, still. No matter how old, or experienced, you get. You still want to grown your game. I feel I've really learned a lot in this short time with the Bulls. That was the important thing, for me. To keep growing. And now we're in contention for a trophy."

The 2021/22 United Rugby Championship Final, between the Stormers and Bulls, will kick-off at 6:30pm [Irish time] on Saturday, with coverage on Premier Sports and RTE.


popular
Ranking the best county GAA songs of all-time (32-1)
"It was unfair on the Galway backs” - Tomás Ó Sé admits that Kerry benefitted from unfair rule
Adrien Rabiot's mother has put Man Utd move at risk of collapse
"I’ve never heard someone say something as stupid” - Katie Taylor blasts Jake Paul's rematch comments
Antonio Conte 'banishes' four Tottenham players from first-team
"I don’t trust you" - Joey Barton delivers brutal dismissal of Irish defender
"I remember just hugging this Irish guy" - How one Kiwi rugby star reacted to Ireland's historic series win
You may also like
3 days ago
"Everything’s done for you" - Eddie Jones on how private schools influence English rugby
5 days ago
Faf de Klerk knocked out after horror collision with knee of All Blacks winger Caleb Clarke
5 days ago
"We'll support him in any way we can" - Wallabies captain Michael Hooper backed for brave mental health decision
1 week ago
At a time when rugby needs genuine characters, Naitoa Ah Kuoi could not have timed it better
1 week ago
Eight Ireland players make final cut in 'World Class' 33-man squad selection
2 weeks ago
"There's no magic wand. A lot of it starts and finishes with hard work" - Ronan O'Gara
Next Page