The passing of Louis Fajfrowski has hit the international rugby community hard.

Louis Fajfrowski passed away during a second division friendly match on Friday night. He was 21 years old.

The centre was taken off after 60 minutes following a heavy tackle while playing for PRO D2 side Aurillac. 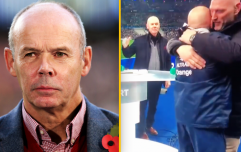 END_OF_DOCUMENT_TOKEN_TO_BE_REPLACED

According to a report from L'Equipe, he was stunned by the tackle but managed to get back to his feet with assistance. He then left the pitch and walked unaided to the changing rooms, accompanied by a doctor. There, he lost consciousness numerous times.

The emergency services arrived, but he passed away around 20:00 local time, according to La Montagne newspaper.

An official investigation has begun into the cause of death with an autopsy scheduled for Monday.

"It @SArugbyofficiel has the pain to share the death of Louis FAJFROWSKI, young player hope. Louis died as a result of discomfort in the locker room during a friendly match. The Aurillac stadium is in mourning and its members send their heartfelt condolences to his family."