The British & Irish Lions were battered, bruised a ground to dust as the Springboks levelled the Test Series at 1-1. Our player ratings have only a few Lions stand-outs.

The first half took over 53 minutes to complete the 40, after numerous stoppages for foul play, reviews, mini brawls and stern warnings from referee Ben O'Keeffe.

END_OF_DOCUMENT_TOKEN_TO_BE_REPLACED 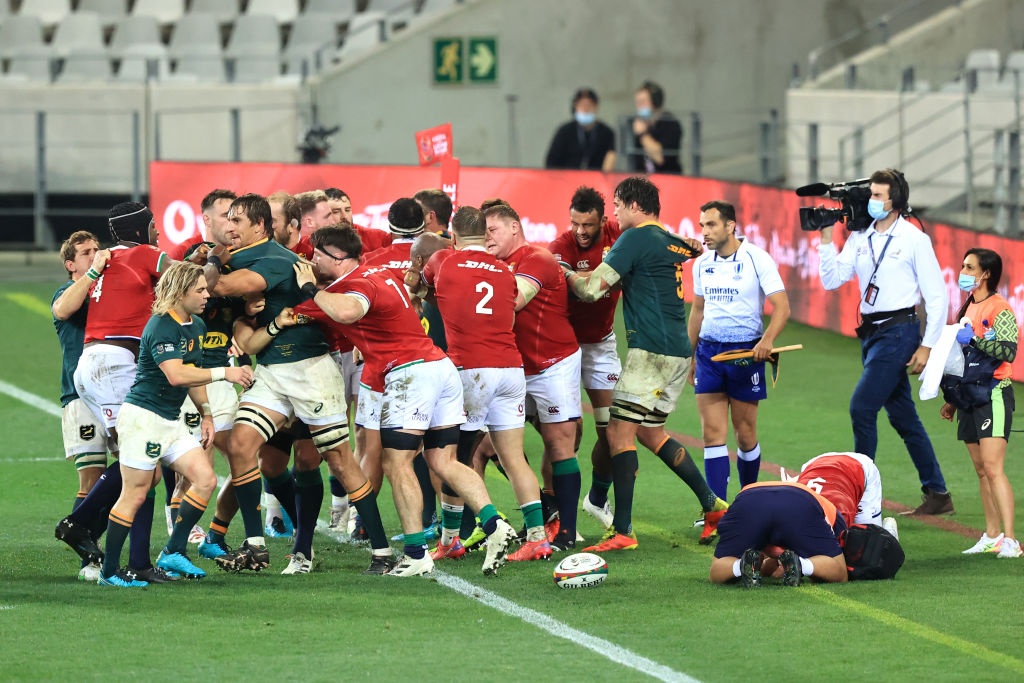 South Africa's second half got off to a perfect start as Makazole Mapimpi raced over, under pressure, after the Lions' were sloppy in the set-piece and defence. The Lions had a chance to go back ahead, soon after, but Biggar struck the post with his penalty.

END_OF_DOCUMENT_TOKEN_TO_BE_REPLACED

The Boks were looking the stronger of the two sides as the game headed into the final quarter. For yet another Test encounter, the Television Match Official Marius Jonker was in the thick of it. On 61 minutes, himself and referee Ben O'Keeffe agreed that Lukhano Am's try was all good, even though some angles suggested he was not in full control of the ball when grounding.

The South Africans were dominating in the air and in the set-piece as the clock wound down. Pollard landed a penalty, on 70 minutes, to make it 21-9 and it was looking grim for the Lions. It sure was as the Boks rumbled on and Pollard pumped over two more penalties.

Here are our player ratings for Warren Gatland's Lions.

END_OF_DOCUMENT_TOKEN_TO_BE_REPLACED

Out-jumped by Mapimpi to cough up one restart. Did better for the rest of the half but knocked on from the kick-off in the second half. Could not claim another Pollard high ball in the lead-up to Mapimpi's try. Did make up for it with an important claim, on 60 minutes, inside his 22 but the Boks were targeting him.

Did not get much chance to shine in the first half. Did toss a pass out of play but the Lions had advantage. Penalised for bumping the airborne Pollard. Missed the only tackle attempt he made. Had a poor knock-on call go against him, late on.

Landed one thumping defensive hit that stalled the Boks' momentum. Hit some rucks and stuck his three tackles but did next to nothing in attack.

Almost, almost had a try following his super aerial take, but Kolisi saved the day. Took a brave restart, just after. Had two tight knock-on calls go against him as he contested aerials. The Lions' top carrier and stuck 10 tackles in defence.

Was yellow-carded, on 22 minutes, for a silly, needless trip on Cheslin Kolbe. His forceful dumping of Pieter Steph du Toit ended the flanker's match and, possibly, series. Made one carry and stuck one tackle in defence. Not the same player we saw in the warm-ups.

Was bringing out the dinks, grubbers and Garryowens in the first 20 minutes, trying to keep the Boks thinking. Backline never got going, but the Lions never played too fast or wide. Landed three from four kicks, but his final one clanged the post. 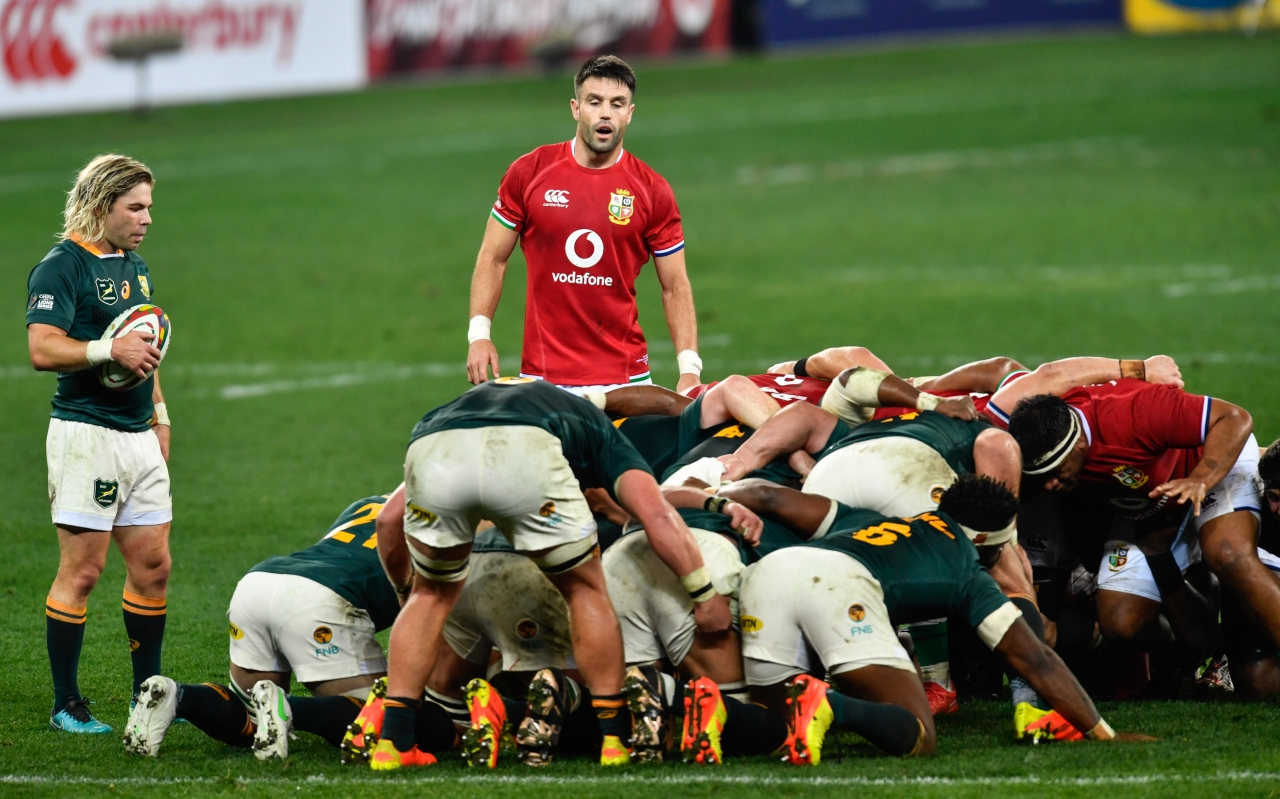 His box-kicking was to the fore in that first half. Penalised for dipping his hands in when a counter-ruck had the Lions under the pump. So lucky not to get badly injured after he was sent spinning by Kolbe. Stuck his tackles around the fringes.

Pinged, very early on, for not rolling away from a ruck. Conceded another penalty at the scrum, on 21 minutes, for boring in. Had three penalty calls go against him, but was useful in the loose.

Lineout throwing much better this week. Made nine carries and stuck nine tackles.

Penalised for an offside call in the early stages. Made some big defensive hits in the opening stages. Scrummaged strongly in the first half but slipped his bind in the first scrum of the second half.

The Lions' top tackler (9) in the first half. Full-blown effort but, as you get with Jones, no real worry when he is making carries.

Another full-on effort but without the same impact. Jumped well in the lineout and was effective at the breakdown, without winning any turnovers or penalties. Penalised late on as the Lions wilted.

Made a crucial lineout steal, just outside his 22. Made little impact with his carries. Tackled with intent.

Was tearing in from the get-go again, and making his hits tell. Like so many others, did little with the ball-in-hand.

Unlucky not to win his side a penalty in front of the posts. Stuck his tackles and was busy about the pitch, but not as much of an impaft as last weekend.

Involved in shaky lineouts that cost the Lions.

In trouble at the scrum.

Improved the Lions' play when he came on.

Came on to play with a forward pack that were going backwards.

Could not stop the green tide.

Struggled to make an impact. Penalised for holding on.

Has been used late in his two outings.


popular
Sean Dyche set to be named Everton manager after Marcelo Bielsa talks break down
Roy Keane flatly rejects longstanding perception of ex-Man United midfielder Paul Ince
Allianz National Football League Round 1: All the action and talking points
Roy Keane leaves ITV pundits in stitches after Pep Guardiola's pre-match interview
Conor McGregor hit by car ‘at full speed’ while cycling
Quiz: Identify these 15 football clubs that are not named after a place
The two toughest calls in Ireland team to face Wales are in the backline
You may also like
3 days ago
"He didn't give me that jersey back!" - Johnny Sexton on new rival Jack Crowley
5 days ago
Robbie Henshaw on his life-long friendship with Bundee Aki and Netflix documentaries
6 days ago
Munster get brutal Champions Cup draw as Leinster face Ulster in Last 16
1 week ago
“He's gonna be pi**ed when he hears this!” – Anthony Watson's Vegas trip with Tadhg Furlong
1 week ago
Kieran Treadwell the most unfortunate Ireland player to miss Six Nations call
1 week ago
Joey Carbery the biggest selection casualty as Andy Farrell gets ruthless
Next Page