"He was sleeping in a bed, right in the middle of the team room, in his full match gear"

"I saw my jersey on the peg and had that realisation - 'I'm about to play for the Lions'."

Back in 2017, Greig Laidlaw made the British & Irish Lions squad, for the tour to New Zealand, after Ben Youngs withdrew from the party. The Scotland scrumhalf did not make a Test outing, but he still had the time of his life.

While the Lions' class of 2021 have been unable to sample the South Africa nightlife, understandably due to Covid restrictions, the 2017 squad had no such issues. As a key player the mid-week squad, Laidlaw got to enjoy a few big bonding sessions in New Zealand watering holes, and beyond.

In the latest episode of House of Rugby's Lions Series [LISTEN from 37:00 below], Laidlaw and O'Brien, who also toured in 2017, recalled some of the wildest antics and nights out. 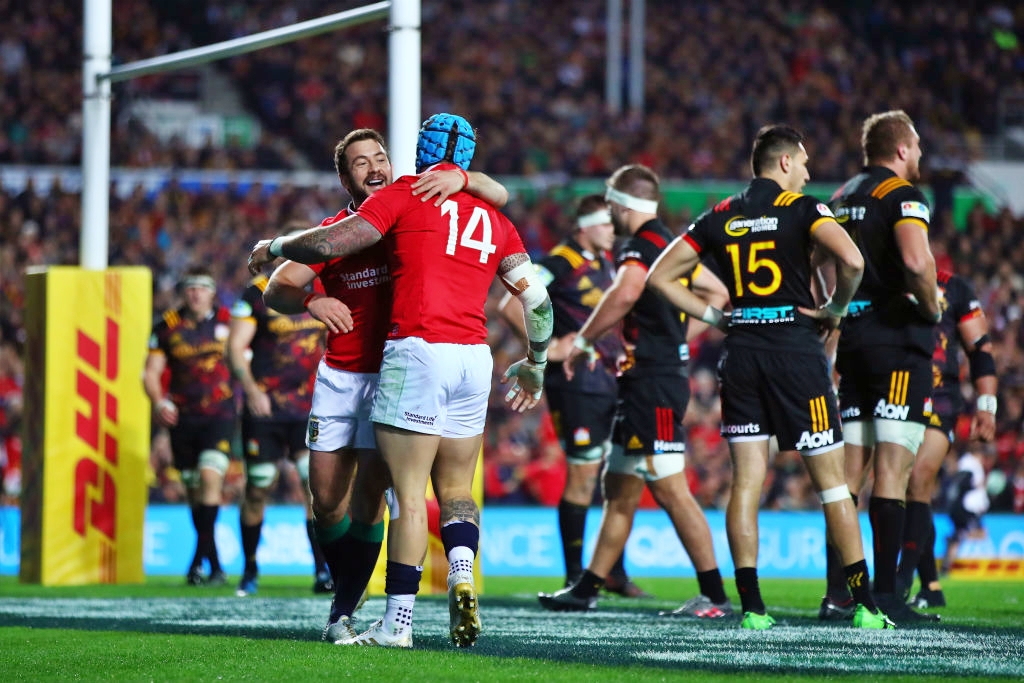 Greig Laidlaw and Jack Nowell celebrate a Lions try against the Chiefs, in 2017. (Credit: Getty Images)

Greig Laidlaw recalls a hectic start to the 2017 tour, as the squad only arrived in New Zealand three days before their first warm-up against, against the Provincial Barbarians.

"It was even after the warm-up," he says, "and it probably still hadn't sunk in yet that I was there. I'll always remember, in the dressing room, my jersey there, ready to go and hanging on a peg right in front of me.

"It's just that realisation that I'm about to play for the Lions and be part of it. An incredible experience and I loved every minute of it. You think of the history of the Lions and the players that have gone before you. That's what makes it so special."

END_OF_DOCUMENT_TOKEN_TO_BE_REPLACED

Laidlaw says he still remains in touch with England hooker Jamie George, who he cracked up a friendship with on the 2017, and Courtney Lawes, who he initially thought he would clash with. Lawes and Owen Farrell dominated at table tennis, and O'Brien recalled the forfeit if we were soundly beaten in a game against either.

"If you got beaten 10-0, you had to do a naked run around the table... I remember going down 8- or 9-0 and thinking, 'Oh no!' because the team room could be full of anybody - physios and anyone else. I rattled a back-hand back down at it was pure relief!

"It was squeaky bum time for some of the table tennis players, because you don't want to be doing a naked lap in the team room."

END_OF_DOCUMENT_TOKEN_TO_BE_REPLACED

Laidlaw said the mid-week boys 'had a good crack at it' on nights out, but were always there on the training ground when needed to prep the Test team for their jousts with the All Blacks.

"There was a lot of envy of the boys, when you'd wake up on a Thursday morning," O'Brien recalls.

"They'd be out after playing the Wednesday night game and there'd be a bit of craic, and a few stories coming back. You'd be thinking, 'Jaysus, will I try get in the midweek team?!'"

The Scotland star, who is currently playing his club rugby in Japan, says the socialising element was encouraged on the 2017 tour. When the Third Test wrapped up, and the series was drawn, the rest of the squad did their best to make up for lost time.

"I remember walking into the team room, at some point, and Jack Nowell was lying, sleeping in a bed, right in the middle of the room. I don't even know where the bed had came from. I think he was in his full [match] gear too. Mad times and such good craic off the field."

The 2021 squad are having to make their own fun within the confines of their team hotel. We have heard about coffee mornings and DJ sets, but nothing quite as lively and colourful as the antics in New Zealand. Perhaps that will come with the end-of-tour session.


popular
Mario Balotelli, Luis Suarez, Fernando Torres and why Rio Ferdinand "hated them"
Javier Hernandez offers to play for Manchester United for free
"I don’t trust you" - Joey Barton delivers brutal dismissal of Irish defender
"I remember just hugging this Irish guy" - How one Kiwi rugby star reacted to Ireland's historic series win
Down county football is in tatters, but Conor Laverty is the man to piece it back together
"I'll ask for everyone that comes to the game to wear purple and roots for us" - Pat Fitzgerald
Gatecrashed interviews and chip-shop previews - Wexford GAA's online coverage sets the standard
You may also like
2 days ago
"Everything’s done for you" - Eddie Jones on how private schools influence English rugby
4 days ago
Faf de Klerk knocked out after horror collision with knee of All Blacks winger Caleb Clarke
4 days ago
"We'll support him in any way we can" - Wallabies captain Michael Hooper backed for brave mental health decision
1 week ago
At a time when rugby needs genuine characters, Naitoa Ah Kuoi could not have timed it better
1 week ago
Eight Ireland players make final cut in 'World Class' 33-man squad selection
2 weeks ago
"There's no magic wand. A lot of it starts and finishes with hard work" - Ronan O'Gara
Next Page