They may have reverted to grinding, cup rugby in the final 20 minutes of the Guinness PRO14 final, in Glasgow, but Leinster put on a real show for the first hour.

Facing a Glasgow side that had put 50 points on Ulster, eight days before, Leinster played a high tempo game and rushed up on Ali Price, Adam Hastings and Sam Johnson - Warriors main distributors. The idea was to starve Glasgow of time and space. Sure, the would be the odd missed tackle but if the rest of the team were switched on, they could be covered.

For the opening 20 minutes, Leinster's strategy looked risky but, as the game progressed, their continued intensity in defence and hard-wired attacking plays started to turn the tide.

Not long after Hastings had kicked Glasgow 10-5 ahead, Leinster were awarded a scrum over on the right flank and about 35 metres from the opposition tryline. What followed was a brilliant example of how this Leinster side operates.

Their 20-phase move, which eventually led to a Cian Healy try that put them ahead for the first time in the game, was lauded on Baz & Andrew's House of Rugby [from 14:00].

"Leinster didn't flinch," Murphy commented. "That phase of play, before the Cian Healy try, was just so impressive.

"I was watching it back and all 15 Leinster players were involved in it and it wasn't just one-out runners. There were lads breaking through lines, coming on the loop, popping offloads. There was a purpose to it all."

Looking back at that sequence - from 25:40 to 27:36 - only one Leinster player (James Lowe) did not make a carry. Luke McGrath had his hands on the ball 15 times, Sean Cronin made the most ground while Rhys Ruddock made three carries in the space of 60 seconds.

Off the scrum, Luke McGrath opted to go to Jordan Larmour on the blindside and the winger (14) made a gain of about five metres. 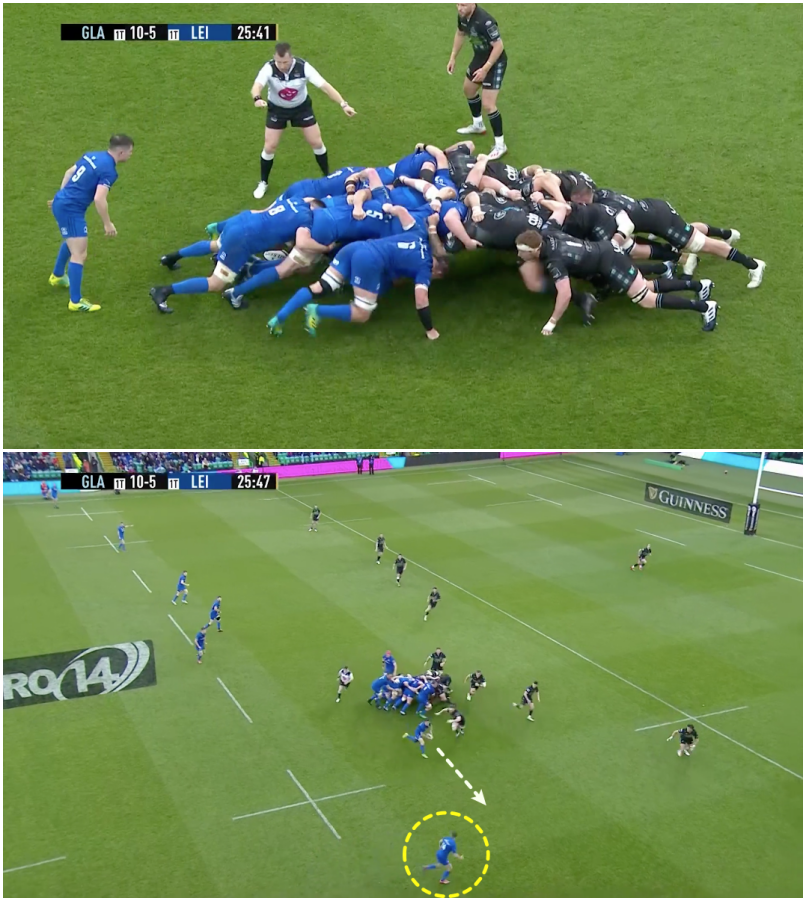 Scott Fardy (4) carries into a clatter of Glasgow forwards. 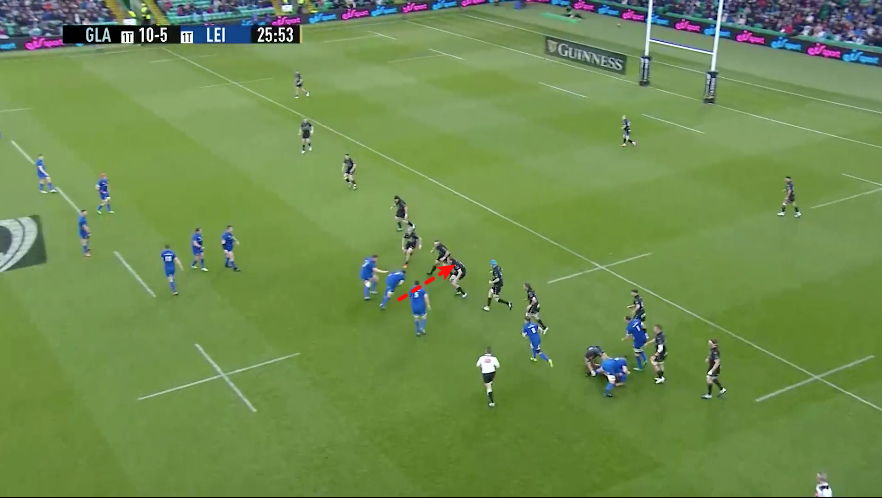 More ground gained as Sean Cronin (2) breaks the tackle of tighthead Zander Fagerson and battles on for another couple of metres.

Johnny Sexton (10) takes a pass from Robbie Henshaw (12) and continue his run to get a popped return from Henshaw. He then passes to Rob Kearney (15) and Leinster have now breached the Glasgow 22. 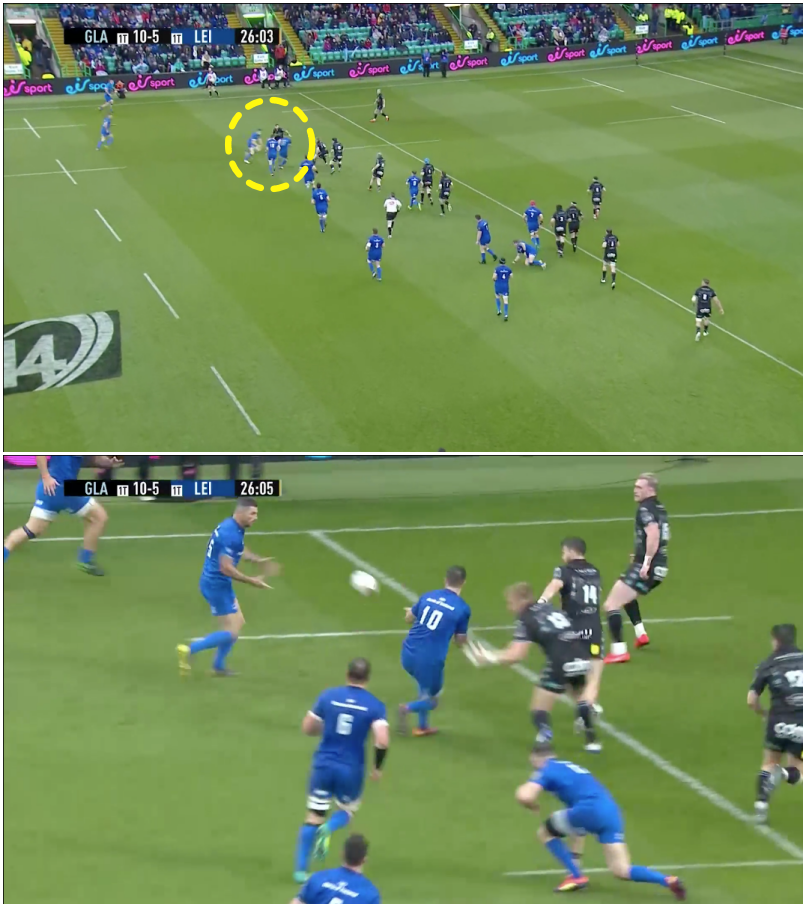 Luke McGrath (9) picks and goes to gain another metre. 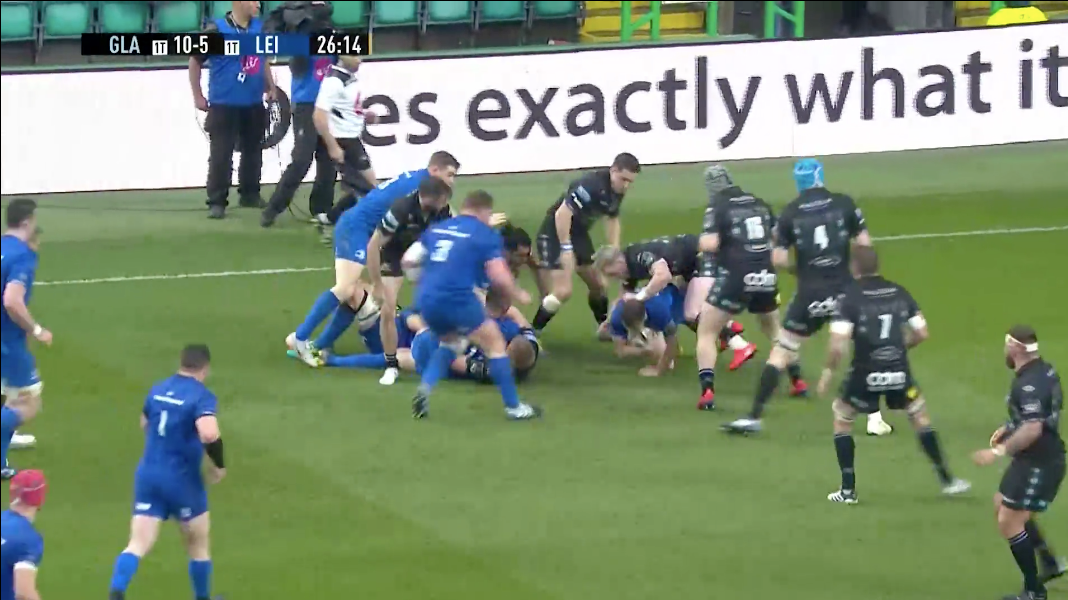 Garry Ringrose (13) picks and goes for another small gain. 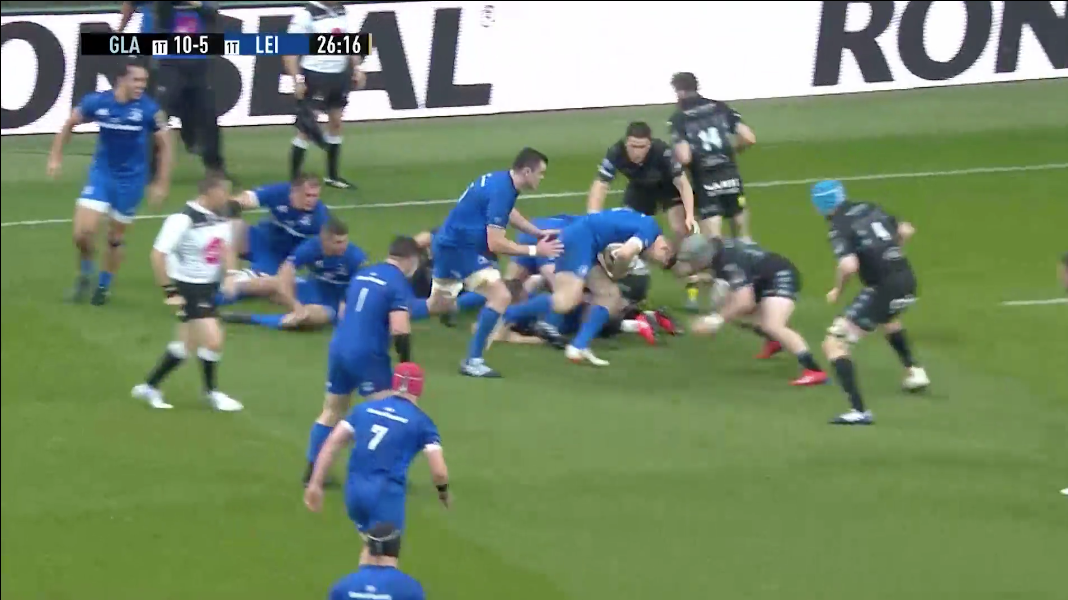 Tadhg Furlong (3) plays scrumhalf at the ruck and passes to Cian Healy (1) for a short carry. Leinster are now 10 metres out. 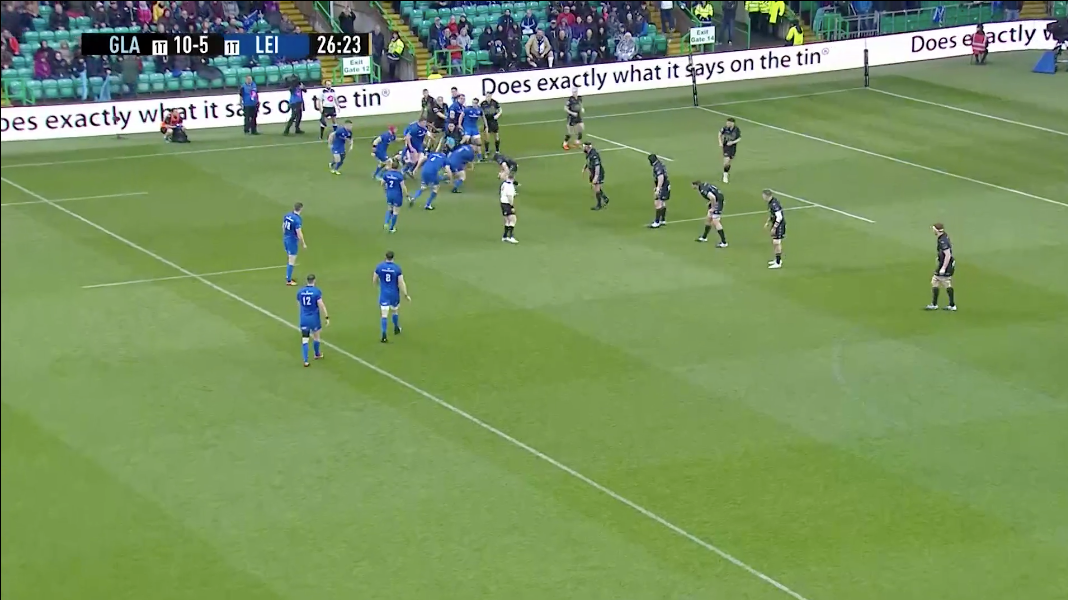 Rhys Ruddock (6) tries to spin out of a tackle but makes no ground.

A one-out carry from Josh van der Flier (7) but McGrath is upping the tempo now.

Play is zipping to the right and Ruddock (6) shows for another carry. 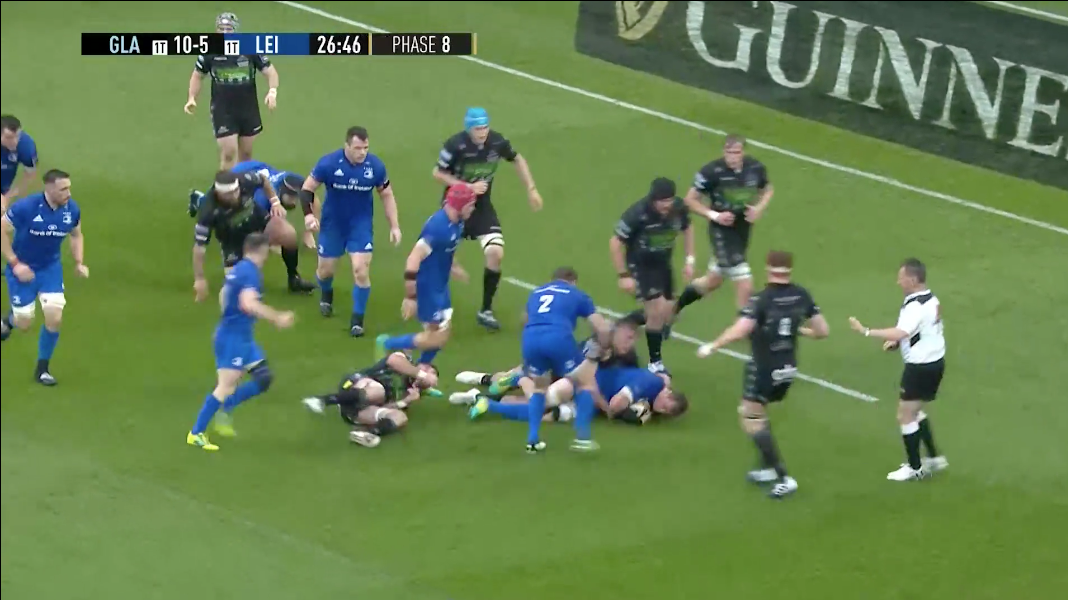 Jack Conan (8) runs hard but doesn't get much change. Leinster are now in front of the posts.

Garry Ringrose (13) spins and bounces before presenting to McGrath.

Jack Conan (8) up again. He tries to get a pass away to the unmarked Rob Kearney (15) but DTH van der Merwe does excellently to wrap him up in the tackle. 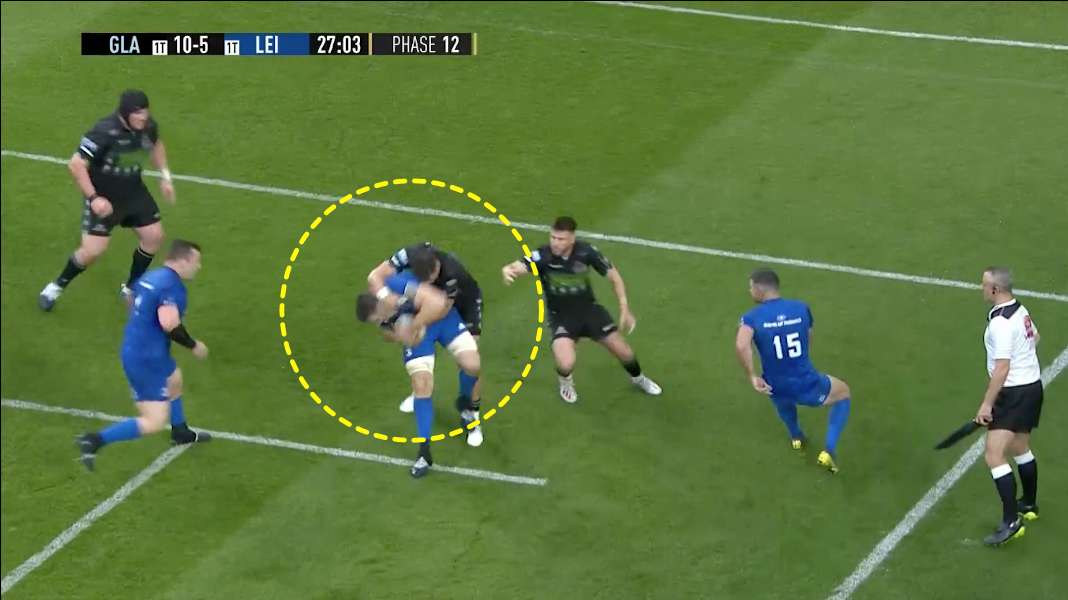 Glasgow now attempt to slow ruck ball down for Leinster, prompting a complaint from Luke McGrath. James Ryan (5) makes another carry and van der Merwe goes for the steal only to be cleared out by van der Flier.

Sean Cronin (2) with the pick-and-go. 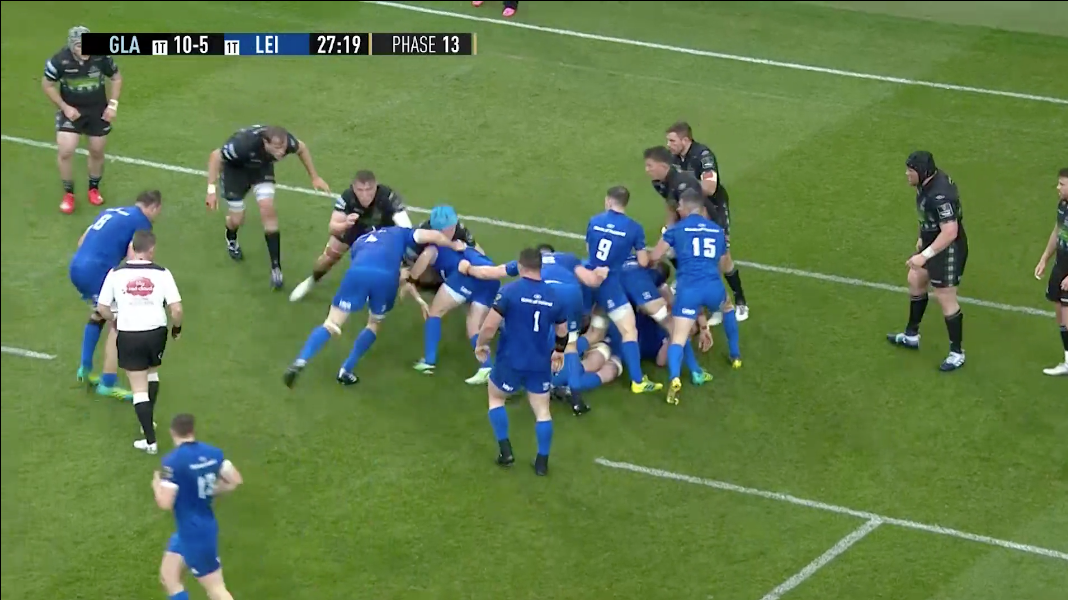 Rhys Ruddock (6) follows suit and the ball is inches from the tryline.

James Ryan latches onto Tadhg Furlong (3) who is repelled at the line.

Cian Healy senses there was now an opportunity to punch over the line. He takes a beat and Scott Fardy latches on. It is all about winning the collision with Rob Harley. With Jack Conan adding extra ballast, Healy powers through and Adam Hastings can do nothing to halt him either.

It was a real show of force and focus from all 15 Leinster players. They were motoring now.

From the moment Healy touched down, Leinster grasped the lead. They would not let it go.


popular
The 14 Irish players Down Under as TG4 come up with the goods once again
Roy Keane's first impression of Cristiano Ronaldo proved to be very accurate
The SportsJOE 12 o'clock quiz | Day 290
Jurgen Klopp chases Sean Dyche down Anfield tunnel after half-time fracas
"I kind of decided on Hill 16, 'you're either going to do this or you're not going to do this.'"
Joe Rogan reveals he could be parting ways with the UFC
Fernando Torres has got absolutely jacked since retiring from football
You may also like
1 month ago
Visit Vodafone’s Pop-Up Shop at JOE with heaps of offers on smartphones, smartwatches and more
1 month ago
"If you don't have a seat at the table, you're probably the one being eaten"
1 month ago
Dan Leo joins House of Rugby Ireland to discuss his acclaimed Oceans Apart documentary
1 month ago
Caelan Doris backed for Lions despite England's expected Test XV domination
1 month ago
A player's perspective on the Monday morning after a big weekend defeat
1 month ago
Road to glory begins here for gems of the National Hunt game
Next Page