What a shame for James Lowe.

Leinster will, this afternoon, name their team for the 2017/18 Champions Cup final and then have a run-out at Estadio San Mamés in Bilbao.

The Blues flew out to Spain on a Thursday evening Aer Lingus flight and they brought a sizeable squad with them, including Michael Bent, Rory O'Loughlin, Barry Daly, Ross Byrne and Nick McCarthy.

END_OF_DOCUMENT_TOKEN_TO_BE_REPLACED

Rhys Ruddock was also on-board and Leinster are poised to name him on the replacements bench for the Saturday evening kick-off against Racing 92. Jack Conan is also set to be named a sub so Ruddock, who has battled hamstring issues these past few months, would be on the bench to cover lock primarily but back row if needs must. 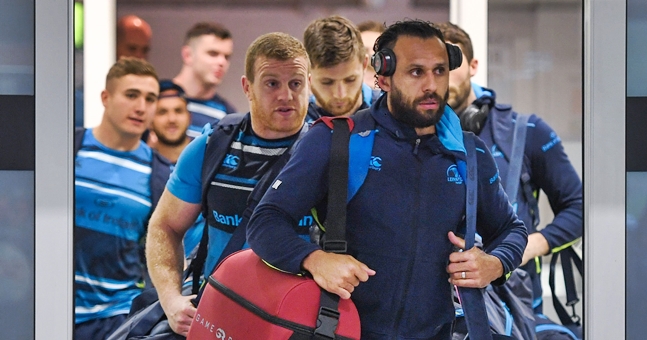 The big Leinster call is the destination of the No.14 jersey. It is unclear whether James Lowe is injured or just out of favour but the Kiwi looks set to miss out on the matchday 23 entirely.

Jordan Larmour will be handed the right wing slot vacated by the injured Fergus McFadden. The 21-year-old has made 19 appearances [10 starts] for Leinster in his breakthrough season but has only started three times on the wing.

Larmour's only appearance in the 14 jersey this season was in the Champions Cup pool match away to Montpellier, when he duelled with giant Fijian winger Nemani Nadolo.

You may also like
2 months ago
Lions coach heaps praise on "outstanding" Ronan Kelleher ahead of Japan Test
4 months ago
Tadhg Furlong, playing with all the chips, doesn't flinch at World Cup question
4 months ago
Leinster run out of steam as Ronan O'Gara's La Rochelle reach Champions Cup final
4 months ago
One more outstanding game and Jack Conan could be a Lion
5 months ago
Madigan, McFadden and Henry on one game they'd change if they could go back
5 months ago
Rating the chances of Leinster's 16 Lions hopefuls
Next Page