Leinster sealed their place alongside Munster in the 2020/21 Guinness PRO14 Final after winning a controversial Conference A clash in Belfast.

Ulster were on the wrong side of four big calls - three disciplinary and one disallowed try - as they finished with 14 men and plenty to feel aggrieved about.

END_OF_DOCUMENT_TOKEN_TO_BE_REPLACED

Leinster went 3-0 ahead after referee Frank Murphy penalised Marcell Coetzee at the breakdown and Ross Byrne made him pay. When Ulster got some decent possession, though, Coetzee's payback was swift.

Mike Lowry gave Ulster a spark with a line break up the right wing but he was clocked by the swinging arm of Devin Toner. There is 15-inch difference in the heights of both players but Toner would have been wiser not to swing across the Ulster fullback and he was sin-binned.

Ulster scented blood and put the squeeze on the visitors. After Robert Baloucoune went close, Marcell Coetzee shunted back Byrne and Rory O'Loughlin to get over for the game's first try.

Five minutes later and Baloucoune finished off a wonderful team move to make it 12-3:

Murphy's Television Match Official was Ollie Hodges and he alerted the referee's attention to a head-on-head clash, instigated by Leinster's Jimmy O'Brien in the lead-up to that Baloucoune try.

O'Brien was going to crease Ian Madigan, who had run a loop, but went too high and the crown of his head connected with the side of Madigan's. For Murphy, after consultation with his TMO it was only a yellow card. As Murphy commented:

"Blue 13 leads with the head... 10 jumps at the last moment... while 13 is responsible, I'm looking at a yellow card because of mitigation."

END_OF_DOCUMENT_TOKEN_TO_BE_REPLACED

O'Brien joined Toner in the sin-bin but Leinster kept the score at 12-3 until the big lock returned. When he did, they scored through Michael Bent after pounding away at the Ulster tryline. Josh van der Flier then got over after a series of tap-and-go penalties in close.

Then came the turning point of the contest. Loosehead Andrew Warwick, who was on for Eric O'Sullivan raised his left arm to fend off Ed Byrne but connected with the throat of the Leinster prop. 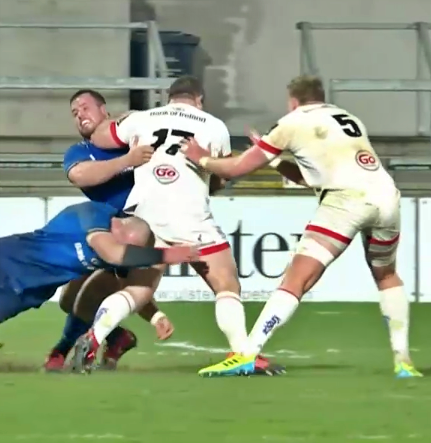 END_OF_DOCUMENT_TOKEN_TO_BE_REPLACED

Murphy initially looked to be favouring a yellow card, but Hodges (his TMO) pressed the case for further review. Murphy eventually said, "I take your point" and it was a red card for Warwick.

Adding salt to the Ulster wounds, Ed Byrne crashed over after Jacob Stockdale had prevented a Leinster try with a great tackle on O'Brien. It was turning into that sort of night for Dan McFarland's men.

Baloucoune looked to have got his side back in the match, on 48 minutes, but his wonderful line and clean break for a try was then chalked off. The call - somewhat harshly - was against Stuart McCloskey for crossing, but Rhys Ruddock looked to have bought his line and had not been fully obstructed.

To make matters (even) worse, Ruddock was the man to heave over under the Ulster posts to secure Leinster's try-scoring bonus point. Ulster were all but beaten, at this stage, and it was all about how much they heart and fight they had.

The answer was delivered by Nick Timoney after a 10-minute siege inside their 22. It was too late to swing the contest but it was heartening to see.

For Ulster, they will soon turn their focus to the Challenge Cup in the hopes of finishing a promising season with some silverware. For Leinster, another league final awaits.

Leinster's replacement hooker Dan Sheehan got over for a late try while Murphy flashed yet another yellow card before the final whistle sounded.

Our Man of the Match: Robert Baloucoune (Ulster)


popular
Rob Kearney taught a classic GAA lesson when he tried to have the craic in second game back
Shane Lowry had no problem setting reporters straight at Ryder Cup briefing
The scenes in Newbridge as the biggest hit and hope ever knocks Moorefield out
Conor McGregor nearly hits Chicago Cubs fan with wild first pitch at Wrigley Field
Kieran McGeary on his relationship with Mickey Harte and his role in Tyrone's success this year
'Solskjaer has started the new season the same, so why would you expect a different result?"
When Liam Brady lit into Brian Clough for his dismissive Mick McCarthy comments
You may also like
3 months ago
Lions coach heaps praise on "outstanding" Ronan Kelleher ahead of Japan Test
4 months ago
Tadhg Furlong, playing with all the chips, doesn't flinch at World Cup question
4 months ago
Leinster run out of steam as Ronan O'Gara's La Rochelle reach Champions Cup final
4 months ago
One more outstanding game and Jack Conan could be a Lion
5 months ago
Madigan, McFadden and Henry on one game they'd change if they could go back
5 months ago
Rating the chances of Leinster's 16 Lions hopefuls
Next Page