Every player once had a player he or she once looked up to.

Leinster players Ian Madigan, Rob Kearney and Fergus McFadden were at Old Wesley Rugby Club, this week, to promote a series of summer camps run by the province.

As part of the promotional drive, young Leinster fans had the opportunity to pose with their heroes, get autographs and some tips on the game.

SportsJOE took the opportunity to ask a couple of the lads about their rugby heroes, growing up.

Currently undergoing return-to-play-protocols after a concussion, last weekend, against Bath, McFadden's hero was a star of the 1995 World Cup. He commented:

'I lived abroad for a few years and I met Chester Williams, who played for South Africa. He gave me his autograph. I would have been getting into rugby at that stage and he was one of their better backs and wingers. Meeting him was pretty cool. It was in Tanzania [when I was 11]. He happened to be over there for a Sevens tour. Nice guy.'

The versatile back, who should start at inside centre for Leinster, against Dragons, this weekend, had a fitting role model.

'I was lucky enough to watch Isa as a supporter... He epitomises exactly the culture we want in Leinster. He is the consummate professional, who goes out of his way to help the younger fellas in the team while, when playing at the top level, in the Heineken Cup, it always seemed to bring out the best in him.'

Madigan was also a fan of this guy as a schools player with Blackrock College: 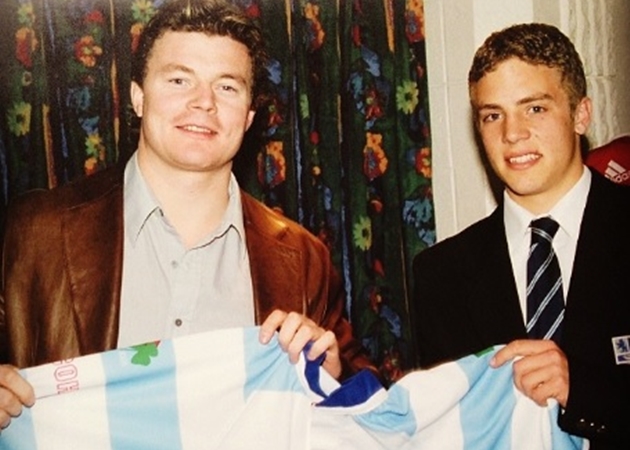 
popular
Roy Keane story shows the power he had at Manchester United
McGregor admits shout from Dustin Poirier's corner got inside his head
McGregor's first words to Poirier after defeat show where the damage was done
Dustin Poirier annihilates Conor McGregor to earn stunning UFC 257 victory
Khabib Nurmagomedov reacts to Conor McGregor's shock UFC 257 loss
Jolie Poirier certainly let her voice be heard after her husband's win over McGregor
Dustin Poirier's reaction to win over Conor McGregor has fans labelling him 'perfect role model'
You may also like
2 weeks ago
Leinster remind Ulster who's boss with impressive second half swagger
2 weeks ago
Story of teenage Ryan Baird in Leinster gym tells us an awful lot about his athleticism
3 weeks ago
Leinster without several senior stars for Connacht after positive Covid-19 tests confirmed
2 months ago
'He has that fiery edge' - James Lowe and his truce with Ireland's Munster crew
2 months ago
39 months later, one of the best rugby stories of the year happened in Glasgow
2 months ago
"There is no doubting Baird is a future Irish second row, long-term" - Paul O'Connell
Next Page