Leinster overcame a stiff first-half performance to remind Ulster, and the rest of the Guinness PRO14, what they are all about.

Ulster went into the league contest at a freezing RDS 10 points clear of their inter-pro rivals and they came out with a point to prove. They had the better of the opening 15 minutes and went 3-0 up through John Cooney.

Johnny Sexton missed a chance to level matters for Leinster before a lovely pass from Jamison Gibson-Park and an even better Dave Kearney finish [his 7th try of the season] saw the hosts edge ahead.

Dave Kearney with a lovely score there pic.twitter.com/WfOkbxfH15

Marcell Coetzee was sent to the sin-bin for a high shot on Sean Cronin - not long after a similar hit on Andrew Porter - and many Ulster fans would have been hoping for them to stay in the contest for the final 10 minutes of the half.

Instead - with Greg Jones and Jordi Murphy impressing - they went in at the break 9-5 ahead after two more Cooney penalties. 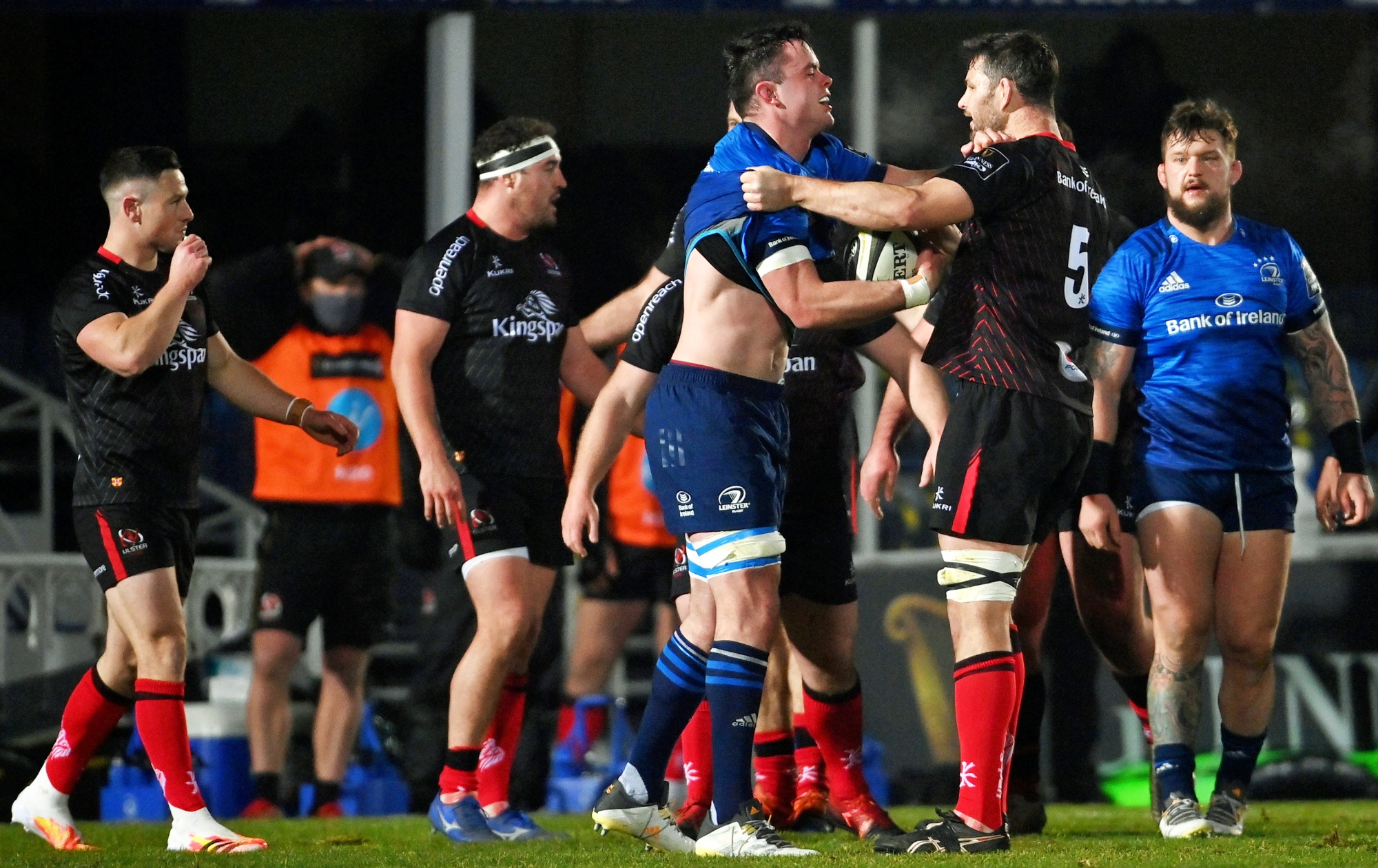 James Ryan and Sam Carter tussle off the ball during the Guinness PRO14 match between Leinster and Ulster at the RDS Arena in Dublin. (Photo by Ramsey Cardy/Sportsfile)
Advertisement

The second half saw Leinster come out with menacing intent. Hugo Keenan, Sean Cronin and Jordan Larmour came to the fore as the champions upped the ante.

END_OF_DOCUMENT_TOKEN_TO_BE_REPLACED

They were rewarded for their early efforts when Sean Cronin powered over for his 42nd Leinster try. Ulster were struggling to get out of their half, and worse was to come, not long after Larmour was held up by James Hume.

The Leinster backline was starting to hum, thanks to their forwards delivering them front-foot ball, all over the park. And it was Robbie Henshaw who rewarded those forwards for their hard yakka by evading a Cooney tackle and diving over, despite the efforts of Matt Faddes and Stuart McCloskey.

Ulster put themselves back in losing bonus point position - with an outside chance of a comeback win - when Cooney's penalty reduced the Leinster lead to 17-12. That was as goos as it got, though, as the Blues marched back up the pitch and grabbed a bonus point try through replacement hooker James Tracy.

Ulster pressed hard for the consolation try that would have seen them head home with at least a point but an intercept by Ross Byrme did for them and it was game over. Should Leo Cullen's men win their games in hand, they will be back on top of Conference A.

OUR MAN OF THE MATCH: Jamison Gibson-Park (Leinster)


popular
Sean Dyche set to be named Everton manager after Marcelo Bielsa talks break down
Roy Keane flatly rejects longstanding perception of ex-Man United midfielder Paul Ince
Allianz National Football League Round 1: All the action and talking points
Roy Keane leaves ITV pundits in stitches after Pep Guardiola's pre-match interview
Conor McGregor hit by car ‘at full speed’ while cycling
Quiz: Identify these 15 football clubs that are not named after a place
The two toughest calls in Ireland team to face Wales are in the backline
You may also like
3 days ago
"He didn't give me that jersey back!" - Johnny Sexton on new rival Jack Crowley
5 days ago
Robbie Henshaw on his life-long friendship with Bundee Aki and Netflix documentaries
6 days ago
Munster get brutal Champions Cup draw as Leinster face Ulster in Last 16
1 week ago
“He's gonna be pi**ed when he hears this!” – Anthony Watson's Vegas trip with Tadhg Furlong
1 week ago
Kieran Treadwell the most unfortunate Ireland player to miss Six Nations call
1 week ago
Joey Carbery the biggest selection casualty as Andy Farrell gets ruthless
Next Page