Munster may have landed a heavy blow, at Thomond Park back in December, but Leinster scored the knock-out when it counted.

Leinster will go to Celtic Park - or Paradise, as the Celtic fans fondly call it - after they defeated Munster in the Guinness PRO14 semi-final at The RDS. A Sean Cronin try in the second half sealed Munster's faith while Josh van der Flier was superb on his comeback from a leg injury.

The first half was compelling as both sides went full tilt and the passages of open play stretched for four and five straight minutes at a time. Garry Ringrose was slicing through slivers of space, for Leinster, while opposite number Chris Farrell was pure class with some gutsy carries.

James Lowe was yellow-carded for a deliberate knock-on, when Munster had a two-man overlap out wide, but both sides had to settle for Ross Byrne and Joey Carbery penalties to keep the scoreboard ticking over.

The game was tied at 6-6 heading into the break when Leinster got a penalty in their own half. They kicked for the line and played on - as they did against Saracens in the Champions Cup final - but were rewarded with another Ross Byrne penalty. HALF-TIME: Leinster 9-6 Munster 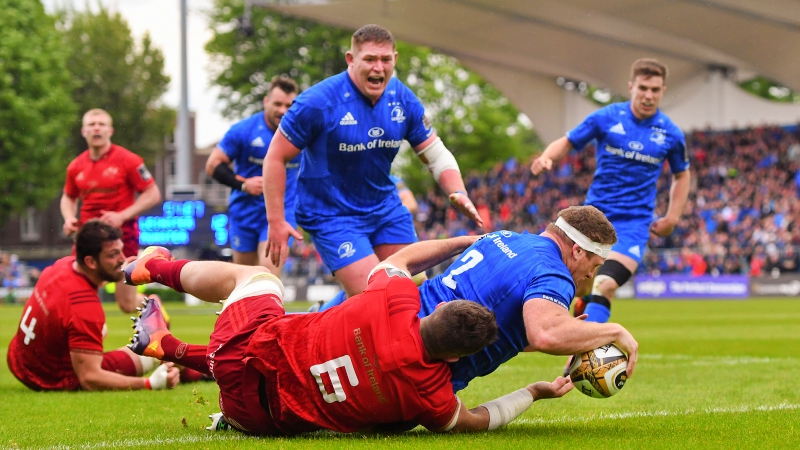 Seán Cronin dives over to score Leinster's first try despite the tackle of Peter O’Mahony of Munster during the Guinness PRO14 semi-final match. (Photo by Ramsey Cardy/Sportsfile)

The second half saw Leinster start brightly and, after Niall Scannell was yellow-carded with 44 minutes gone, Byrne made it 12-6 with his fourth penalty. Munster answered back with a Carbery penalty before Leinster put the hammer down.

Lowe featured three times in a multi-phase attack that eventually sucked in Munster bodies and left space out on the right wing.

END_OF_DOCUMENT_TOKEN_TO_BE_REPLACED

The lads out wide were all Leinster front-rowers - Cian Healy, Sean Cronin and Tadhg Furlong - but their handling was excellent. Cronin had a man outside but he cut in and barrelled over for his 13th try of the season. Byrne got the conversion and left the fray for reigning World Player of the Year Johnny Sexton.

Sexton ripped it up with his first few carries on the pitch and though Munster were back to a full complement of players, they were merely hanging on.

Munster defended doughtily but could not rediscover that attacking spark in the final quarter. Arno Botha was replaced by Jack O'Donoghue and CJ Stander reverted to No.8, the openside experiment not having paid off.

The final 10 minutes was a celebration as Munster ran out of steam and the home fans celebrated. Lowe rounded out a great individual performance by beating Mike Haley on the outside to score a try in the corner.

Off to 'Paradise', next Saturday, to face Glasgow Warriors.

OUR MAN OF THE MATCH: Josh van der Flier (Leinster)

popular
The SportsJOE 12 o'clock quiz | Day 76
The SportsJOE 12 o'clock quiz | Day 75
SportsJOE 2000s Football Quiz | Round 4
The SportsJOE 12 o'clock quiz | Day 73
One of the UFC's most hyped prospects admits to copying Conor McGregor
Michael Owen jersey number story shows Alex Ferguson at his shrewdest
You'll have to be red-hot to get 20/20 in this 2010s footballers quiz
You may also like
6 days ago
Tadhg Beirne on the Wayne Pivac request that helped change his career
1 week ago
Baz & Andrew's House of Rugby - Tadhg Beirne and John Cooney
2 weeks ago
How Munster could line out after confirmation of fourth major signing
1 month ago
Munster's James Cronin gets one-month ban for 'unintentional anti-doping violation'
1 month ago
"Am I going to be safe? Am I going to come home healthy?" - Munster doctor joins Covid fight
2 months ago
'Paul O'Connell re-arranged my living room furniture' - a rugby ref's tale
Next Page