Quarter final place already secured, Leinster have now secured themselves a match at home in the last eight. More likely than not, that tie will be in the Aviva Stadium.

Despite the final scoreline, Lyon put up another good fight against Leinster but they were always facing an uphill battle against a team in rare form.

END_OF_DOCUMENT_TOKEN_TO_BE_REPLACED

Leinster have now won all 15 games this season and they could yet go through the entire season unbeaten if they keep up this form and if injuries are kind to them. They dominated possession and territory for long stretches and the only surprise was that Lyon were so close at half-time.

For the 10th time in their 15 outings so far, Leinster scored a try in the opening 10 minutes. Awarded a penalty and assessing his options, Ross Byrne spotted James Lowe out on the far wing. He found the Kiwi with a cross-field kick and he popped a pass in for Dave Kearney to score.

7-0 became 14-0 when Luke McGrath made a sniping run and found Josh van der Flier in support. The openside still had work to do but he rode a couple of tackles to get the score.

Lyon hit back with a Virgile Bruni try before Kearney helped himself to his second of the day and his ninth try in nine games this season. In terms of end-product, the 30-year-old is Ireland's form winger heading into the 2020 Guinness Six Nations.

END_OF_DOCUMENT_TOKEN_TO_BE_REPLACED

At 21-7 - even with a Scott Fardy try chalked off - Leinster looked poised to secure their tryscoring bonus point before half-time but, instead, it was 14-man Lyon [with a man in the sin bin] that scored next. Henrik Root's try made it Leinster 21-14 Lyon at the break. 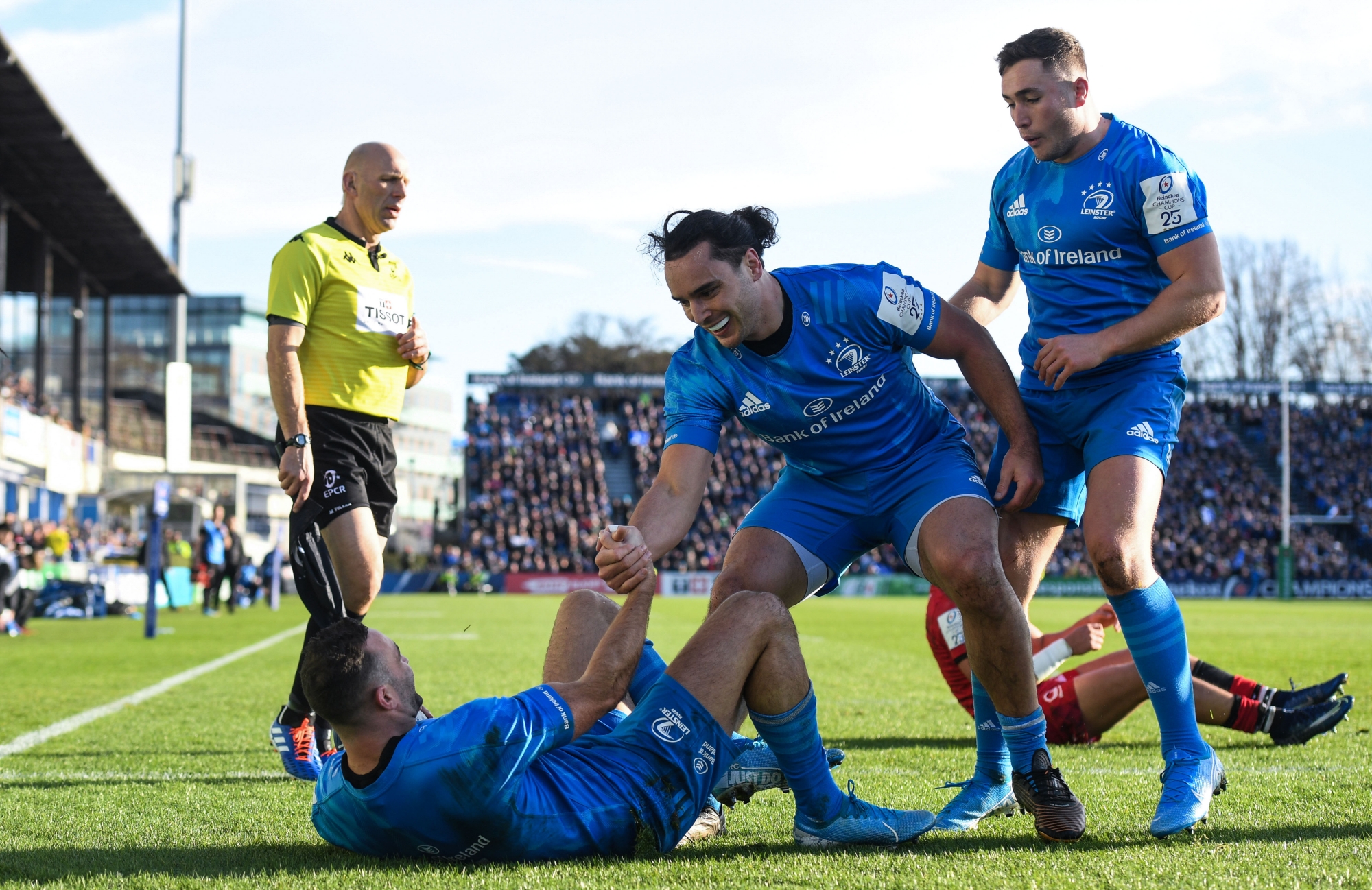 Dave Kearney, left, celebrates with Leinster team-mates James Lowe, centre, and Jordan Larmour after scoring his side's first try during their win over Lyon at the RDS Arena in Dublin. (Photo by Ramsey Cardy/Sportsfile)
Advertisement

Lyon had their tails up at the start of the second half but Leinster were relentless whenever they got a sniff. They went through phase after phase, stayed confident and eventually wore the visitors down.

END_OF_DOCUMENT_TOKEN_TO_BE_REPLACED

Max Deegan, who was excellent again, scored Leinster's fourth try and head coach Leo Cullen then made five substitutions as soon as Ross Byrne lapped over his conversion. On of the subs, Sean Cronin, spotted a defensive gap as Leinster set up another rolling maul and he cantered over.

The Blues' sixth try was teed up by fine work from Garry Ringrose and James Lowe and finished off by Andrew Porter as he picked and heaved the ball onto the Lyon tryline.

The match ended with a brief but fruitless flurry from Lyon. In truth, Leinster were rarely in trouble, even at 21-14 and they have taken scalp number 15.

OUR MAN OF THE MATCH: Max Deegan (Leinster)